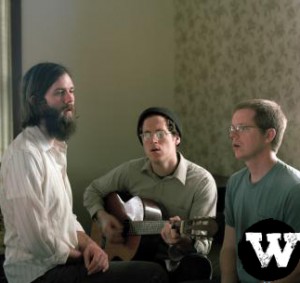 Hello and welcome to another edition of the Weekender. Not much is needed to set us up this week, so let’s jump right in. Here’s what’s going on:

The Daredevil Christopher Wright is a three piece indie band from way up in Eau Claire, Wisconsin. They emerged in the mid 2000s when brothers, Jon and Jason Sunde decided to dive into the growing Eau Claire music scene (remember Bon Iver?) With the help of percussionist, Jesse Edgington, the band has made a name for themselves with their story telling songs and a focus on complex vocal melodies and harmonies; they have received classical voice training. Often experimenting with odd and changing time signatures, they’re going to make you think a little bit. Their arrangements are precise and eclectic. They played a fantastic show with Little Scream at our own Mission Creek Festival this past spring. Their second full length album came out just last month and it’s exciting that they’re back so soon. What is also exciting is that Via Audio is opening. Via Audio consists of four Berklee College of Music graduates and their music has been received with high praise from the likes of Pitchfork and Death Cab’s Chris Walla. They have a new album due out sometime this year. Iowa favorite, Christopher the Conquered gets things started.

Eleni Mandell has been a strong  force in the Los Angeles music scene for over ten years now. She released her eighth studio album earlier this month and received help from members of Beck, Los Lobos and Bright Eyes. It features dramatic horn and string arrangements, and as the press release says, “plays like a lost 60s am pop radio gem.” The album, entitled “I Can See the Future” is something of a concept album. It tells the story of her decision to have children via sperm donor. She ended up choosing, “an astrophsysicist who likes classic rock.” She was over eight months pregnant while she was recording the album. Local singer/songwriter, Milk & Eggs will be opening along with Minneapolis band, Painted Saints.

Joan Soriano, also known as The Duke of Bachata, has been working hard over the past 30 years to keep a genre of music alive and even bring it into the mainstream. Bachata music began in rural areas of the Dominican Republic and ended up defining the country’s musical flavor. Artists such as Soriano travel the world spreading Bachata music and the form of dance that arose with it. In fact, there are free Bachata lessons before the show at 7:15 PM. Soriano was featured in Alex Wolfe’s critically acclaimed musical documentary, Santo Domingo Blues, and is the main subject and star of Adam Taub’s documentary, The Duke of Bachata, which paints an intimate portrait of Joan as he strives to make a success of his career and improve the lives of his extended family in the Dominican Republic.

Swedish singer/songwriter, Sofia Talvik set off on an ambitious two year long tour last December, and we get to catch her about a fourth of the way through it. Talvik has released 4 proper  albums so far and a number of EPs. Her latest, The Owls Are Not What They Seem is set to be released sometime this year. Talvik is a multi-instrumentalist and incorporates violin, cello and horns in her predominantly acoustic guitar driven songs. Her Scandinavian background shines through in her music, though she takes a special interest in the American landscape as well. Opening this show, once again is Milk & Eggs.

Have a pleasant weekend!