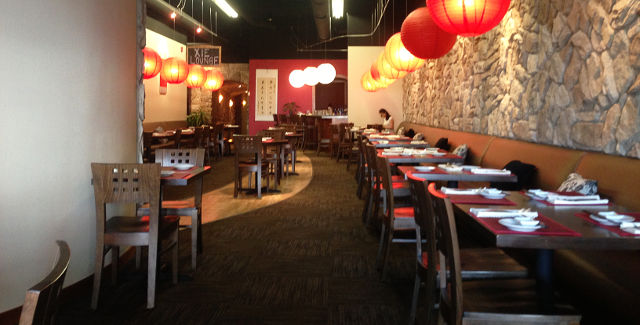 On August 27, XIE (pronounced “shay”) hosted a grand reopening after receiving a makeover from Restaurant Redemption, a yet to be aired program that will be showed on The Cooking Channel. There was promise of a “celebrity chef” and a free meal for up to 100 people. Chicken Little would like to go on record to say that this little chick’s XIE dining experiences up until this point had been very positive. However, unless a reality TV show is about making over a person or a room, it’s my guess that disaster is desired above success. Drama reads better on camera than “damn- that was yummy.” So, it is the assumption that XIE’s makeover was deliberately crappy and the wonderful people of XIE should not be held accountable for trusting a celebrity chef and a bunch of TV people to make them awesome. Chicken Little fully trusts that XIE can rise above the dumbies from TVland and make XIE great again.

I work downtown and the show wanted me, none other than your beloved Chicken Little, and my Bossman to be at the filming. We were to report to The Englert Theatre at 4:30 p.m. to sign paperwork, and then dinner at 5 p.m. A quick head count showed that there would be just about the right amount of folks for the dinner, but perhaps a few folks would not make it in. The person who seemed to be in charge was a nice gal named Tonja, but Tonja was either killing time or did not have a plan because what was supposed to be a 30-minute holdover at the Englert dragged on and on. We each filled out a release form that no one understood, but a quick glance at the first paragraph lead me to believe that it had something to do with allowing our likeness on TV and the show having every right to make fun of each and every one of us.

There was a nice cross-section of Iowa City there. Some folks were dressed up and some looked like they had just gotten out of work from their landscaping job. Thankfully there was an array of Iowa City characters with tats and ear plugs, plus a bunch of college students, as well as the famed doorman of the Englert, Kent Smith, looking dapper out of uniform in a polo. There turned out to be about 30 extra people, but it took Tonja and her crew of crack PA’s until 8 p.m. to figure out who was going to be let in. At one point, when they finally released people who would not get in, a group of the people being released yelled, “I’m just a homeless person trying to get a free meal — fuck this!”. That’s where I knew those folks from!

Bossman and I had established our entourage in the hours of waiting. We were: 1) “Scarfy”, an old friend of mine from college who was famous for wearing a 20-foot long scarf and using it to repel down a balcony, who is now a filmmaker making a documentary that will implicate the FDA and Farm Bureau for poisoning the food supply. 2) His beautiful girl/friend who we will call “Noir”, and 3) “Yogi”- a downtown food business owner. Chicken Little, Bossman and Yogi all knew that the night involved reality TV, but Scarfy and Noir had no idea — they thought they were just going to a restaurant opening. In the end, Scarfy’s presence would be vital to the success of the mission.

But, first: drinks. And not at XIE. At one point they had told us the wait was going to last a bit so we went out, drank a bottle of French white wine and came back when we got the call to line up outside. Which we did. For 45 minutes. In 100+ degree heat. The women were melting into grease balls and the men we were starting to smell like animals. It was getting interesting, and even though we could smell disaster, we kind of wanted to see it through. We weren’t in it for the glory, at this point we were so hungry that we were in it for the promised free meal.

Finally — they let us in.The cameras followed each party to their table. A dude with a mic almost crotch-butted Scarfy and ducked just in time. And then the reveal: WOW! The makeover involved hanging red paper lanterns. Low. Budge. They also created a sort of lounge area over by the bar that they spent most of the time filming in because some serious cougars with big fake badoingas who were being loud and drinky were over there. They reminded me of the token Russian wives on “Orange is the New Black”, except with more botox. But, they were having fun because they were getting service. Drink after drink was delivered to them while the cameras filmed them yelling “cheers!” and high fiving each other. There was cleavage everywhere.

Over at our sadly buttoned-up table, 20 minutes had passed and finally a tiny young woman in a prom dress approached our table with a carafe of water that was bigger than her torso. Her arms shook as she poured the water into the heavy 20oz water glasses. Why were the water glasses so big? Only time would tell. She was very prompt throughout the night filling our water, which did help to dull the hunger pains as we continued to wait.

We finally ordered drinks and after being there for 40 minutes, our nice, warm drinks arrived. When we complained that the white wine was warm we were told that “this is a kind of white that is meant to be served warm”. Scarfy’s feathers stood on end. He looked like he might bite into Noir’s arm for sustenance. My little chicken belly growled audibly saying “XIE… XIE! Why have you forXIEen me!?”

Then they brought us the food: California rolls, basic as hell, but with a really unusual sauce. I think it’s called KIKOMAN. The rolls fell apart when you touched them with the chopsticks and there was some green bean tempura and some dry, cold steak served on some sloppily presented sushi rice placed on a piece of nori. There were exactly 2.5 bites per person and that is when we found out there was no meal. They had run out of some chicken appetizer that everyone else seemed to have and then they brought us their crown jewel, what would forever become a joke between the members of our rag-tag entourage: a pancake.

After the first bite it was apparent that dunking it in the special, exotic KIKOMAN sauce was necessary to resurrect this bland loaf from the desert. The uninteresting pancake landed somewhere between a eucharist and a day-old crepe that had been left out in the sun. I had had much, MUCH, better at XIE. This TV crew was really fucking things up!

And this was it. All the food. At this point it was 9:30 p.m. We started calling around to see where we could go out to eat. We were getting ready to walk when we were presented with our check. Except the meal was supposed to be complimentary. Um… oh! The drinks aren’t free. And then it happened. The celebrity chef came to check on us.

Ching-He Huang, host of “Chinese Food Made Easy” on the Cooking Channel, finally graced our table with her pissy fakeness. Before this I had seen her only once. She ran past us yelling at the restaurant owner, “These are college students! COLLEGE STUDENTS!”, she yelled. I wanted to yell, “No we’re not! Were hungry and we’re judging you!”

What follows is what Chicken Little remembers of our conversation. Remember, I was blinded by “celebrity”, had not eaten and had two warm alcoholic beverages, so this account should not be considered verbatim:

Ching: How is your meal?
Scarfy: This isn’t a meal. It’s “Asian Food USA”.
Ching: (smiling, looking pissed) What do you mean? You aren’t satisfied?
Scarfy: No. Those were appetizers, not a meal. It was bland, boring food.
Ching: Oh no! But, it’s Asian FUSION.
The patient, darling manager of XIE: No, actually, it’s not fusion. It’s sushi and tempura.
Ching: (glancing at manager, annoyed, keeping to script) It’s a new concept. Asian Fusion Small Plate Bar Food. You know, this is a college town!? We want to cater to the college students!
Chicken Little: That would have been good to know that because we were told we were getting a meal.

Then, Scarfy told her off, something like, “Just because we are Iowans does not mean we don’t have a sophisticated palate.” Then, he told her that the food was pitiful, the server was fine, but the idea of seating 75 people at once had obviously overwhelmed the kitchen, that THIS IS IOWA and there was not a vegetable to be seen in this meal.

Ching did not like this. She did not like this at all.
‘
Ching: But, did you try the PANCAKE?
Scarfy: Yes, I tried the PANCAKE.
Ching: It had vegetables in it.
Scarfy: Well IF there were vegetables, they were fried beyond recognition, because I didn’t SENSE a vegetable in the PANCAKE.
Ching: It’s a special PANCAKE.
Scarfy: It wasn’t special. It wasn’t good. We’re tired and grumpy and hungry — our drinks were warm. The lights are turned up all the way. The wait was way too long. The makeover is cookie cutter. We’re going out for dinner.

We left and I got a huge steak at Clinton Street Social Club and we all drank too much wine and felt bonded in a way that only people who have been through something traumatic together can feel. We drank and ate and yelled, “Have you tried the PANCAKE!?” like a call to war from one side of the table, and the other side of the table would answer, “BUT there are VEGETABLES in it!”. We laughed, we analyzed, and we concluded that this was a fluke and we couldn’t write XIE off. The allure if fame is strong, but Iowa business owners are stronger. Even in all the fun, Scarfy was looking a little despondent and he confessed that he really regretted signing the release, regretted telling Ching off. We all reassured him that he did good, and this Chicken Little says HE IS A XIE-RO!