When Joni Ernst rode the Republican wave last month to a U.S. Senate seat, it marked the first time a woman in Iowa had won a federal race. Many Iowans were left wondering: What took so long?

Iowa and Mississippi had been the only states never to elect a woman to either U.S. House, U.S. Senate or the governorship. Ernst broke Iowa’s gender barrier this year, nearly a century after women started winning congressional races in other states.

The gender disparity persists throughout Iowa politics: From county townships and city councils to the statewide executives and federal offices, there’s no level of elected office where women are equally represented. It’s partly a self-perpetuating problem — when there are few elected woman at the local level, there are few qualified women to run in bigger races. 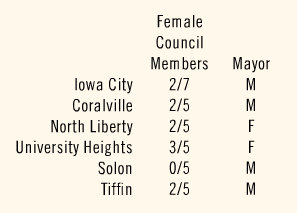 Amy Nielsen is one of those relatively few women holding elected office in Iowa. The 37-year-old mom and community volunteer won a heated special election for North Liberty mayor this fall.

Nielsen said her decision to run stemmed in part from a conversation she had with her son several months earlier, after he asked Nielsen why women couldn’t be president.

“‘They can, there just hasn’t been one yet. Women are trying and becoming more prevalent in politics,’” Nielsen recalls telling her son. “That really had a lot to do with going for it at this time. It was something I knew I wanted to do, and the opportunity was unique.”

Nielsen’s opponent in the race, Garry Kuhl, served nearly a decade on city council before he was appointed to the seat this year following the previous mayor’s death. Kuhl sharply criticized Nielsen as unqualified, while Nielsen campaigned as “a fresh voice for North Liberty” and pointed to her experience in school politics and in local nonprofits.

She secured 55 percent of the vote, and became the first woman to hold the mayor’s seat in North Liberty. Nielsen said she is facing unique challenges that male candidates may not.

“I wouldn’t go so far as to say I’ve experienced gender prejudice, but you definitely have to prove yourself a little bit more, you have to work a little bit harder,” she said. “On the flip side, I had a lot of folks saying ‘It’s time for a lady mayor.’ I think it can go both ways — negative and positive.”

Ernst joins just two other women holding statewide office — Lt. Gov. Kim Reynolds, who was elected with Gov. Terry Branstad and State Auditor Mary Mosiman, who was appointed by Branstad in 2013 and won her first election in November.

That compares to six men who hold statewide office, plus all four congressmen, three-fourths of the state legislature and the whole Iowa Supreme Court. In well over 1,000 statewide races in Iowa’s 168-year history, women have only won about a dozen times, often as runningmates to male governors. And in all that time, we’ve only had two women on the Iowa Supreme Court.

It doesn’t help that women are underrepresented in the business world, where many political candidates tend to come from. A study by American Express in 2012 showed Iowa is dead last among American states for female business ownership.

And the disparities aren’t much better here in supposedly progressive Johnson County: Between the Iowa City Council, Johnson County Supervisors and the elected county department heads, fewer than a third are women. Before the election, half of the lawmakers representing Johnson County were women, but it will be 3-5 in the new year.

“We have a lot of talented women here in Iowa who can [run for office], but I don’t know why they’re not going for it,” Nielsen said.

To be fair, our state isn’t without its gender equity successes. In 2009, Iowa became one of the first states to require gender balance on locally appointed boards and commissions. And historically, Iowa City has the distinction of electing the first female mayor of any sizable American town — businesswoman Emma Harvat back in 1921.

And there’s a lively movement afoot to curb Iowa politics’ gender disparity. One organization, “50-50 in 2020,” hopes to see women holding half of the state’s legislative seats by the year 2020. The bipartisan organization holds candidate training seminars that appear to be somewhat successful — among 2012 candidates who participated in the program, 40 percent won. That compares to just 14 percent success for female candidates who didn’t participate in a “50-50 in 2020” event.

Jean Lloyd-Jones, one of the organization’s co-founders and also a former lawmaker from Iowa City, summed up why we need more female representation last year when she wrote, “Women as a rule choose collaboration over confrontation, pragmatism over polarization, and legislate for the common good.”

Adam B Sullivan is an activist and freelance journalist living in Iowa City.