As Summer is just heating up, it is also speeding towards its conclusion. There are just under three months until fall returns, and with it, the school year, cold, and responsibility. If you have a yen for a summer adventure without the long drive and hefty expense of a big city visit, perhaps it would be better to stay closer to Iowa City. Here is a completely non-comprehensive list of 14 destinations for would-be Iowa travelers, which I derived after consulting with our goodly friend, the internet. Disclaimer: As I have not visited most of these destinations, I can not vouch for the quality of experience a traveler will have there. I can only offer my sage traveling maxim: “If all else fails, find a place that sells good pie.” 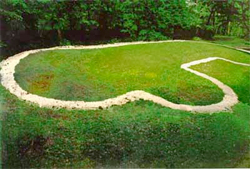 Effigy Mounds National Monument – Harper’s Ferry A national park in northeast Iowa, Effigy Mounds National Monument is one of the remaining tributes to the once-thriving Indian culture that spread across the upper Midwest. Still more than 200 earthen mounds, originally meant to commemorate lost loved ones, exist intact at the park. Some some of them are arranged in large animal formations. There is no camping at the park, which is intended to be enjoyed on foot. Guided tours are available. For unguided tours, access is limited to 14 miles of hike-able trails. On July 10 and 11, the park will host a American Indian Heritage Celebration, featuring live music, dance and American Indian food stands. Website: www.nps.gov/efmoDistance from Iowa City: 90.6 miles

Herbert Hoover National Historic Site – West Branch
In recent months, former President Herbert Hoover has been compared to both departing President George W. Bush (for both presidents being universally unpopular) and to current President Barack Obama (for both presidents inheriting a financial crisis from a previous administration) — and despite the Iowa’s status as a caucus state, presidential candidates to this day avoid Hoover’s historical site like the plague. But with his birthplace and Presidential Library so close to Iowa City,it not might be a bad idea to learn more about this perhaps unfairly maligned ex-Prez of Iowan roots and Quaker background. Also, as I imagine you are a master of Hoover Ball, you will want to attend the Hoover Ball National Championships held during Hooverfest on August 1 in West Branch. Website: hoover.archives.gov/visiting/welcome.htmlDistance from Iowa City: 9.7 miles

American Gothic House – Eldon
You can’t beat a tourism destination that actually feeds into your insane desire to post stupid pictures of yourself on the internet. Yes, the old house featured in Grant Wood’s “American Gothic” still stands intact, and the center nearby will actually supply you with period appropriate wear to take your own version of the famous painting. And after you post the picture on Twitter minutes after taking it, you can rest easy in the knowledge that the money on that new iPhone was well spent. Website: www.wapellocounty.org/americangothicDistance from Iowa City: 91.4 miles Danish Windmill Museum – Elk Horn There are two competing thoughts in my mind as I read about the Danish Windmill Museum: 1. 200 miles is a long way to drive.2. Windmills are awesome! Almost anticipating this mental struggle, here is a compelling argument yanked from a Danish Windmill Museum press release:

“You’ve been to Disney World, the Grand Canyon, and Mall of America. But have you visited the Danish Windmill in Elk Horn, Iowa? This village, typical of small-town America, boasts no roller coasters, natural wonders, or famous cartoon characters. Oh, it is much more original than that! Its uniqueness stems from the town’s residents, ancestors of Danish immigrants.”

Perhaps the only thing inherently cooler than still-working Danish windmills is an exhibit that somehow combines antique hand-carved wooden clocks with famous composer, Antonin Dvorak, who lived in the town of Spillville for a short time. Cameras are explicitly forbidden inside the museum (way to build the intrigue!) but the website claims that some of the clocks stand over nine feet in height.

I don’t even have to explain myself on this one. Sure it’s on the other side of the state, but I’m positive it would be worth it. Any town that has the guts to declare itself the Ice Cream Capital of the World better be prepared to stuff me so full of frozen dairy that I will spend the next several days in a nearby hotel room lying on my back like a beached sea mammal, my shirt rolled up to my ribs, a warm compress on my forehead, as I slowly massage my distorted belly, warbling in pain, and delight.

Need a closer location to gorge yourself on ice cream? Try the Wilton Candy Kitchen in Wilton. The old style ice cream parlor has been in existence for more than a century and is one of the oldest, if not the oldest, continuously-operating ice cream parlors in the world. What more do you need?

A Marble Rock Museum in Marble Rock, Iowa, operated by the Marble Rock Historical Society. I felt compelled to include this destination to reward this town for its consistency. Also, I feel through my one-man campaign, I may be able to get their website over 1,000 hits. Go Marble Rock! 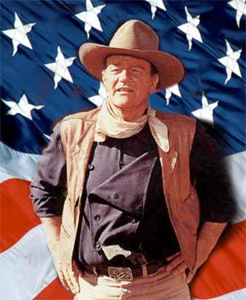 No, Clint Eastwood won’t be there in real life, ready to take a hot bath with you. That’s bound to be disappointing. But seeing the Bridges of Madison County is still just kitschy enough to be a worthwhile venture. Remember what I said about the American Gothic House? Your digital cameras will come in handy here as well.

On the way to the bridges you can visit a small white house where the man who would become John Wayne was born. Afterward you can contribute to the building of John Wayne Birthplace Museum and Learning Center. The fund drive, represented on the website by an empty boot slowly filling with red, is $4 million short of its goal. 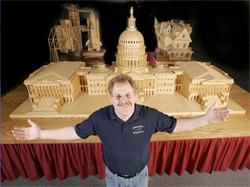 It apparently only took artist Patrick Acton 478,000 matchsticks to construct a model of the U.S. Capitol, while it took him 602,000 sticks to build Hogwarts, the school of Wizardry from the Harry Potter series. I don’t know what this disparity means to the relevance of these two buildings to my life, but I do know that it compels me to reward this Herculean feat of human nerdiness (I say this affectionately) with my time and rapt attention.

“Pat Acton is clearly the best matchstick model maker in North America. Quality-wise and skill-wise, he’s the best in the world.” — Edward Meyer, Vice President, Ripley’s Believe It or Not!

What do Albuquerque, New Mexico, and Indianola, Iowa, have in common beside being almost impossible for me to spell correctly from memory? Hot air balloons! And while those jerks in New Mexico have claim to the biggest hot air balloon festival, Indianola still has its balloon museum and hall of fame. Take that, Land of Enchantment!

On July 31 through August 8, head down to the 40th annual National Balloon Classic featuring hot air balloon rides and other events as a part of the festival’s B.M.W. (balloon, music, wine) weekend. Because if there’s anything you want to mix with hot air balloons, it’s the consumption of alcohol.

There is something surreal to me about a museum devoted to Hobos with the website, www.hobo.com, which offers, among other things, Hobo Shopping opportunities; I call dibs on the Hobo museum themed drink Koozies. Luckily enough for the Hobo museum, I consider a surreal destination an essential part of any summer trip. From August 2 to August 8, the museum will be celebrating its 20th Anniversary. Come enjoy ice cream, a parade, a Hobo Memorial Service, and a poetry reading at the Hobo Jungle. And always remember, follow the Hobo Code. Website: www.hobo.comDistance from Iowa City: 206 milesTwo Flood Damaged Destinations: Sutliff Bridge and the Mother Mosque of America Both affected in various ways by the flooding last June, these two historical monuments are still trying to recover and would be helped by your patronage and generosity. Two of the spans from over a century-old Sutliff Bridge near the unincorporated town of Sutliff still stand after the Cedar River tore one of its pieces. The bridge’s fate is still uncertain, but Baxa’s Store and Tavern, known for the dollar bills that patrons have stuck into the ceiling over the years, still remains. Website: www.sutliffbridge.comDistance from Iowa City: 20 miles The Mother Mosque of America is the first permanent structure to be built specifically to serve as a mosque in the United States, and it also so happens to be located in one of the neighborhoods devastated by the flooding, destroying many of the Islamic building’s historic documents. Website: www.mothermosque.orgDistance from Iowa City: 30 miles