In celebration of their monumental efforts, here are 10 labor rights activist, some famous, some little-known. Think of them this Labor Day. 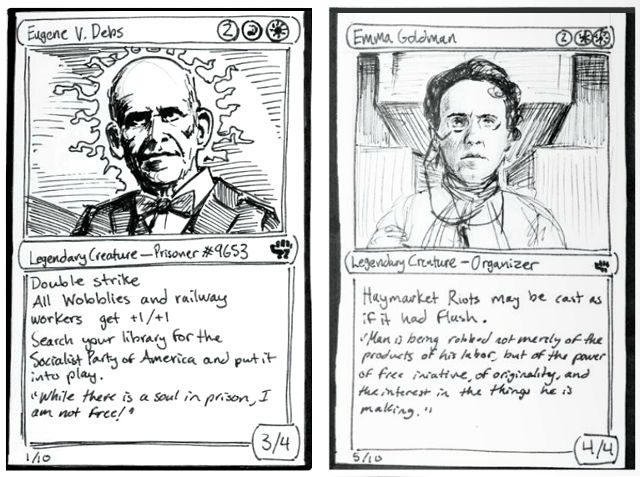 Following the Great Railroad Strike of 1877, Debs threw his support behind railway workers, helping to found the American Railway Union (ARU) and, later, protesting the Pullman Company’s various abuses. Debs organized a Social Democratic Party modeled on similar organizations in Europe, which would later become the Socialist Party of America (SPA). In 1905, Debs formed the International Workers of the World (IWW), whose members, “Wobblies”, called on all workers to join “one big union” and seize direct control of industry through mass strikes. Later, after delivering a series of anti-war speeches during WWI, he was imprisoned for ten years under the Espionage Act, which made it unlawful to incite active opposition to U.S. involvement in the conflict. Debs, who campaigned for the presidency several times, ran for fifth and final time in 1920. Though he lost the race, the grandfather of American socialism—AKA federal prisoner #9653—received nearly a million votes.

“If voting changed anything,” Emma Goldman once said, “they’d make it illegal.”

Emma Goldman championed women’s equality, free love, workers’ rights, free universal education regardless of race or gender, and—placing little faith in traditional democracy—anarchism. “If voting changed anything,” she once said, “they’d make it illegal.” For more than thirty years, Goldman defined the limits of free speech and dissent in Progressive Era America. Ever the upstart, she was imprisoned several times, most notably for her strenuous opposition to the draft during WWI, and for giving public lessons in contraceptive use. “The history of progress is written in the blood of men and women who have dared to espouse an unpopular cause,” she said, “as, for instance, the black man’s right to his body, or woman’s right to her soul.” 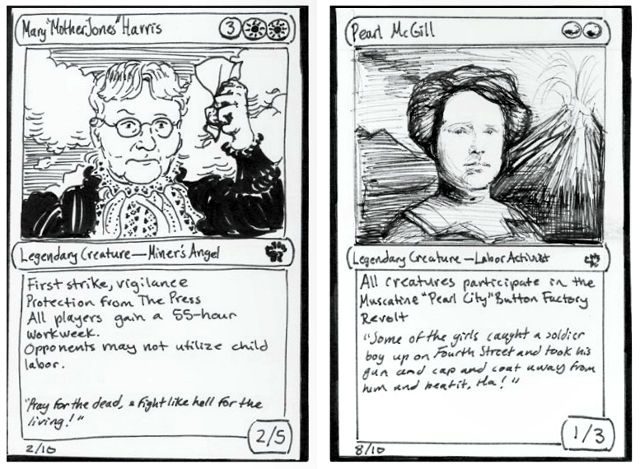 After immigrating to America, Mary Harris Jones worked as schoolteacher and dressmaker until her husband, George Jones, and their four children perished in the 1867 yellow fever epidemic in Memphis, Tenn. She then moved to Chicago to find work, only to see the remainder of her possessions destroyed in the Great Chicago Fire. With literally nothing left to lose, Jones devoted herself to the Labor Movement, fighting to abolish child labor and helping to found both the United Mine Workers of America (UMWA) and the IWW. After she began referring to the miners as “her boys,” she took on the nickname “Mother” Jones. Coal miners and their families called her “the miner’s angel.” Opponents called her “the most dangerous woman in America,” and when she was denounced on the floor of the U.S. Senate as “the grandmother of all agitators,” she said she hoped to live long enough to be the great-grandmother of all agitators.

As a teenager, McGill was hired to work as an industry spy in a button factory in Muscatine, Iowa—then producing ⅓ of all buttons sold worldwide—but instead of reporting on radical unionists, she became one. When she was sixteen years old, she lead 2,500 men, women and children in a strike in response to a factory lockout—the owners’ response to worker unionization. While working closely with the IWW in 1912, she played a key role in the “Bread and Roses” strike in Lawrence, Mass., in which 25,000 New England textile workers ceased production, demanding fair wages and stable working conditions. After meeting her at a conference in Cedar Fall, Iowa, Helen Keller (a fellow SPA and IWW member) awarded McGill a scholarship to attend a teachers college. 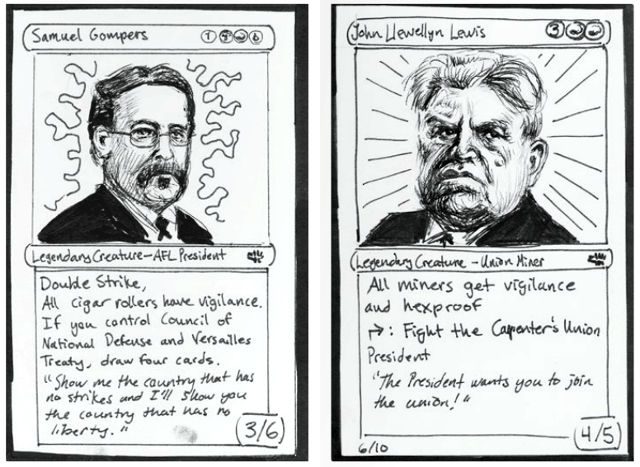 Samuel Gompers was the first and longest-serving president of the American Federation of Labor (AFL). Under his leadership, the AFL became the largest and most influential labor federation in the world, growing from 50,000 members in 1886 to nearly 3 million in 1924. Gompers sought to build the labor movement into a force powerful enough to transform the economic, social and political status of America’s workers. During World War I, President Woodrow Wilson appointed Gompers to the Council of National Defense, where he helped mobilize labor support for the war. At the war’s end, Wilson appointed Gompers to the Commission on International Labor Legislation at the Versailles Peace Conference, where Gompers helped form what would become the International Labor Organization (ILO). Although the labor movement suffered considerable setbacks in the 1920s, the labor policies forged during that decade laid the basis for the 1930s New Deal endorsements of labor rights.

After working as a coal miner and serving as the recording secretary of the UMWA Local 1933, Lewis went west in 1901. He rode the rails for four years, experiencing firsthand the hardships of laborers in various industries across the country, and returned home determined to see working conditions changed for the better. In 1920, he became the president of the UMWA.

Lewis leapt a row of chairs and knocked Carpenters President William Hutcheson to the ground with a right hook to the nose.

When Congress passed the National Industrial Recovery Act in 1933 to regulate production, ensure stable employment and guarantee workers the right to organize and bargain collectively, Lewis flooded coalfields with message: “The President wants you to join the union!” Three months after the legislation passed, 92 percent of all U.S. coal miners belonged to the union. In 1935, after the AFL rejected his proposal that they make good on promises to organize and charter industrial unions, Lewis leapt a row of chairs and knocked Carpenters President William Hutcheson to the ground with a right hook to the nose. Lewis went on to be the founding president of the Congress of Industrial Organizations (CIO) and lead the campaign for the first Federal Mine Safety Act in 1952. 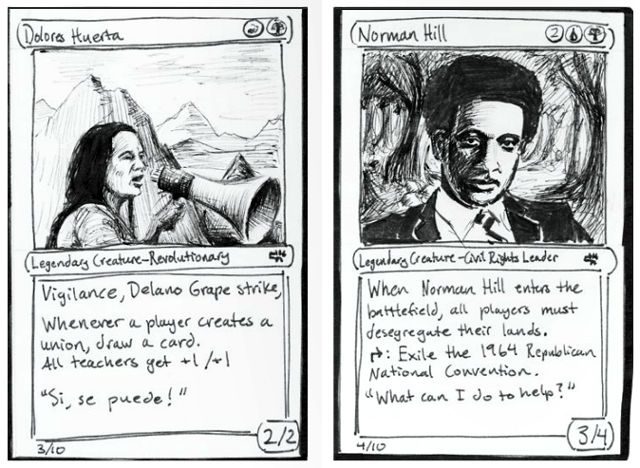 After her parents divorced when she was three years old, Huerta’s mother worked two jobs to support the family. Huerta, in turn, went to work as a grammar school teacher, but soon left the job. “I quit because I couldn’t stand seeing kids come to class hungry and needing shoes,” she said. “I thought I could do more by organizing farm workers than by trying to teach their hungry children.” In 1955, she helped start an Arizona chapter of the Community Service Organization (CSO), which battled segregation and police brutality, pushed for improved public services, led voter registration drives and fought to enact new legislation for the benefit of Hispanic communities. In 1962, she co-founded the National Farm Workers Association (NFWA) with Cesar Chavez, and in 1965, Huerta directed the national boycott during the Delano Grape Strike, a strike of over 5,000 farm workers. In 2011, President Obama awarded her the Medal of Freedom, the United States’ highest honor. His 2008 campaign slogan, “Yes, we can!” was derived from Huerta’s protest chant: “Si, se puede!”

After graduating from Haverford College (where he was one of the school’s first black students) in 1956 and completing military service, Hill joined the Civil Rights movement in Chicago. From 1964 to 1967, Hill was Legislative Representative and Civil Rights Liaison of the Industrial Union Department of the AFL-CIO. Hill coordinated the Route 40 (from Baltimore to Washington, D.C) restaurant desegregation campaign in addition to the Waldorf Astoria, A&P Stores and  Trailways Bus Company campaigns. He also planned and directed the civil rights demonstration at the 1964 Republican National Convention, helped to coordinate Dr. Martin Luther King’s  1964 six-city get-out-the-vote tour, lobbied to increase the minimum wage and was in the labor delegation on the Selma-Montgomery March against racial discrimination in voting in the Deep South. Later, as the President of the A. Philip Randolph Institute—organization for African-American trade unionists—Hill oversaw the opening of over two hundred local chapters. 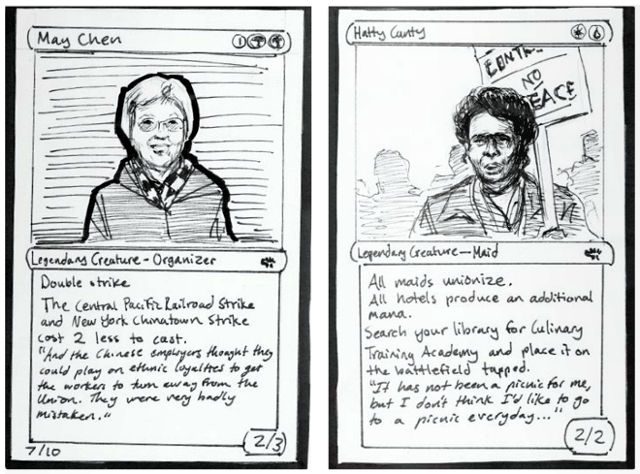 During the 1867 Central Pacific Railroad workers strike in California—one of the first labor strikes in the U.S.— 2,000 workers, most of them Chinese immigrants, refused to work until wages and safety conditions improved. Over 100 years later, May Chen led the New York Chinatown strike of 1982, one of the largest Asian American worker protests to date, with about 20,000 garment factory workers marching the streets of Lower Manhattan to demand work contracts.“The Chinatown community then had more and more small garment factories,” said Chen, then affiliated with the International Ladies’ Garment Workers’ Union. “And the Chinese employers thought they could play on ethnic loyalties to get the workers to turn away from the union. They were very, very badly mistaken.” The protests included demands for higher wages, improved working conditions and for management to observe the Confucian principles of fairness and respect. The strike forced employers to hold back on wage cuts and to give workers health benefits and time off on holidays. Negotiations following the strike paved the way for improved benefits, including the hiring of interpreters, the initiation of transportation services and English-language classes for workers.

Canty worked as a hotel maid in Las Vegas, where she became president of the Las Vegas Culinary Worker’s Union Local 226 in 1990. Under Canty’s leadership, Culinary 226 emerged as one of the largest unions in Southern Nevada, representing the tens of thousands of workers employed in the hospitality industry. Canty’s tenure as head of the union coincided with the longest labor strike in American history. In September 1991, 550 culinary workers at the Frontier Hotel walked off the job over unfair labor practices by the casino’s owners. Their strike ended six-and-a-half years later when the Frontier Casino’s new owner settled with the union. By the mid-1990s, maids and other hotel employees in Las Vegas could earn more than double the average wage of service workers in other cities.

This article was originally published in Little Village issue 182