It’s possible to find restaurants in the United States that take sushi as seriously as the most tradition-bound restaurants in Japan do. It’s also possible to buy sushi at your local Hy-Vee. And if you want your sushi covered in Flamin’ Hot Cheetos, Hy-Vee is probably your best bet.

Hy-Vee is currently advertising “Cheetos Flamin’ Hot Sushi Roll,” which it says will be available “All Summer Long.” For most of the staff at Little Village, this culinary mashup was a fascinating oddity, but didn’t sound appealing. But there were two adventurous eaters among us, willing to try it and with a lunch hour to spare: writer/editor Izabela Zaluska and Celine Robins, LV’s marketing director.

Plans were made, sushi was purchased ($5.45 for 10 pieces), lunch was served and what follows is an account of Izabela and Celine’s reactions to the cheetofied sushi.

A few facts before feasting

• Izabela has never tried Flamin’ Hot Cheetos, and doesn’t care for heavy-handed spice being used just to add heat to food. Celine, although not a fan of Cheetos in general, has eaten the Flamin’ Hot variety and enjoyed the heat. Both were eager to see how the Cheetos blended with the sushi.

• The sushi beneath the Cheetos was a California roll, the U.S.’s distinctive contribution to the world of sushi. Unless it’s Canada’s distinctive contribution. After California rolls became popular, two chefs in Los Angeles each claimed to have invented the factory-style fish dish (it uses imitation crab — or “krab” — which is formed from a paste of pulverized pollock) in the late ’70s. A chef in Vancouver also claimed he invented it, but said he did so in the early ’70s. (A British Columbia roll?)

• After the dusty lunch was ordered, the employee preparing sushi at the Waterfront Hy-Vee took a California roll he’d just finished making and rolled it in a container filled with finely crushed Flamin’ Hot Cheetos, giving the roll a very colorful coating. He then sliced and packed the sushi.

• Flamin’ Hot Cheetos were a success for the Frito-Lay Company as soon as they were introduced in the early ’90s. The origin of the snack has also become widely known as success story, as Richard Montañez has told audiences across the country about dreaming up the new flavor while working as a janitor at a Frito-Lay factory in California, fighting his way past doubters and backstabbers to make his idea become a flamin’ hot reality, and rising up the corporate ladder to become a Frito-Lay executive thanks to the spicy corn puffs. In addition to earning large speaking fees for telling his story, Montañez got a book deal for a memoir called Flamin’ Hot, and a movie about him is in pre-production.

• One problem with Montañez’s story: it’s not true. He did start as a janitor and eventually become an executive, but he had nothing to do with the creation of Flamin’ Hot Cheetos, as the Los Angeles Times documented in a long, detailed story last month. The idea for a spicy Cheeto flavor came from Fred Lindsay, a Chicago-based Frito-Lay salesman. The new corn-meal puff was created by a product development team at the company’s Texas headquarters, led by Lynne Greenfeld. Greenfeld was responsible for approving the taste, the bright color and dropping the “g” from flaming. Producers of the movie told the Times they are still going forward with it, but will focus on other aspects of Montañez’s life. (Presumably not the parts where he pocketed big speaking fees while lying, but if there’s anyone who would find getting rich by taking credit for the work of others inspiring, it’s a movie producer.)

“I will say that as I’m observing the exterior, the Cheetos are very evenly crushed and the rolls are evenly coated,” Celine said.

There is no discernable Flamin’ Hot Cheeto smell, Celine noted. “It pretty much just smells like sushi.”

“I barely taste the Cheeto,” Celine said. “Which is honestly disappointing.”

“I barely taste it, too,” Izabela agreed.

What little Cheeto taste was present was just the basic corn flavor, not the spices, according to Celine. Izabela found the sushi had a very slight spicy aftertaste.

“I really think the Cheetos are not bringing anything to the party,” Celine said. 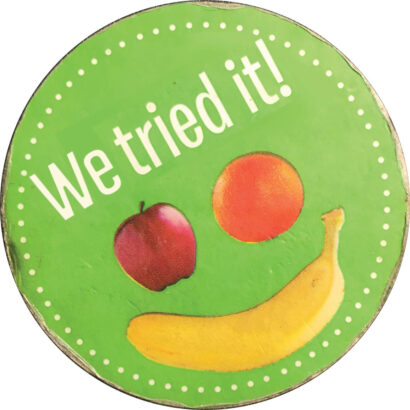 “I really feel I’m looking into the void right now,” Celine said. “I was expecting so much of… something. I was expecting that no matter what the experience was going to be, it would be a strong experience.”

“At least, some crunch,” Izabela added.

The Cheeto coating wasn’t crunchy. The Cheeto flakes seemed to have absorbed moisture from the sushi rolls, becoming soggy. But both Celine and Izabela suspected the Cheeto flakes were stale to begin with.

Both Celine and Izabela finished their fives pieces of sushi.

“I find it to be no different than regular grocery store sushi,” Izabela said.

Both agreed “inoffensive” was a good description for cheetofied sushi.

“I don’t know if that’s what you strive for in a culinary experience,” Celine said. “When you buy Flamin’ Hot Cheetos, you do it with some purpose.”

“If you’re going to go for an ambitious crossover, the worst thing you can be is not memorable.”

“This did not ruin sushi for me,” Izabela said, summing up her lunchtime experience.