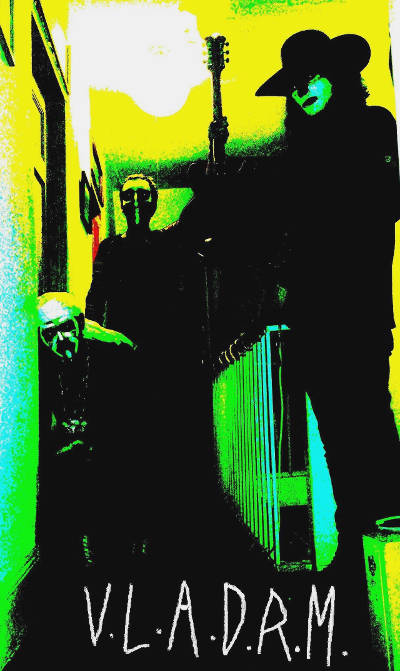 After fifteen years, and six full-length albums, Viva L’American Death Ray Music (aka VLADRM), has cultivated a sound that defies expectation. VLADRM engages the back-alley grit and eroticism that belies all good garage rock, but often drops off into zoned out interludes of psychedelic minimalism that bring to mind a Burlesque show on the astral plane. The vocals are wan, yet melodic, and reminiscent of the Velvet Underground or The Fall, which makes the overall style and composition as experiential as it is danceable.

VLADRM’s founding member, and Iowa City native, Nicholas Ray (Los Diablos Del Sol, ’68 Comeback, Golden Triangle), is known for having his hands full. Besides VLADRM, Nick has done movie soundtracks, most notably his work with Walter Steding on Celine Danhier’s documentary Blank City, an oral history of the “No Wave Cinema” movement in late 1970s and early ’80s New York. And just returning from living abroad in Switzerland where he played in the concept project The One Year Band (meant only to last a year), Ray has revved VLADRM back into high gear. Also joining Nicholas Ray are long-term VLADRM members Tom Delaney, Kunal Prakash and Little Village’s music editor Brendan Spengler. As far as a line-up is concerned, you don’t get better than this.

So, whatever you had planned for this coming Wednesday night—DROP IT! Get a sub, find a babysitter, ditch your lame date and come to Gabe’s for a night of down home, hi-energy rock and roll. Your mind-circuits will not only be blown, but also rewired to wreak interstellar havoc in loose fitting lingerie.

Randal O’Wain is fiction writer and essayist from Memphis Tennessee whose work appears in Crazyhorse, Redivider, Hobart, decomP, and Blood Lotus. He now lives in Iowa City where he is an MFA candidate in the Nonfiction Writing Program at the University of Iowa.