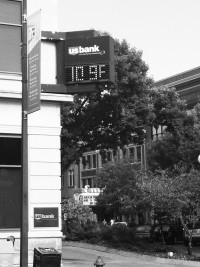 Fire came early this year. Before the summer solstice brought its long light to North America, Colorado was ablaze. This spring, I wrote about multiple 90-degree days in Iowa in March. And in May, Johnson County played host to a weeks-long curtain of flame and plume of black, acrid smoke rising from its landfill, reminiscent of the burning oil fields of the first Gulf War. As I write, Iowa City is racking up its fourth official 100-plus-degree day of the summer.

In my spring column, I echoed the growing chorus of “this is what climate change looks like.” I reiterate the caveat that weather is not climate. But climate, in many ways, is the accumulation of weather data, and we have reached the point where, it seems to me, our atmospherics and their results have become more climate change data than anomalous weather patterns. According to Bill McKibben, May of this year was the 327th consecutive month in which the temperature of the entire globe exceeded the 20th century average. When most of the hottest years in terms of average global temperature have occurred in the past decade and a half, we’re now in the confirmation rather than speculation stage of global warming.

This summer has been nothing less than frightening. The number of record highs across the U.S. has been smashed and smashed again. To put this in another perspective, 350.org notes how, so far this year, 90 percent of the temperature records broken have been high temperatures, and only 10 percent have been lows. Theoretically, in the absence of climate change, that should stand at 50/50. In the 1950s, the proportion was 52/48. In 2010 and 2011, those numbers were in the 70/30 range.

The extent of the country’s drought has now exceeded the last great dryness in 1956. On top of that, the temperatures are higher than in the 1950s. Across Iowa, the soil temperatures four inches below ground are in the 80s and even into the 90s in the northwest part of the state. This just adds to the air temperature, in addition to further drying out the ground. Iowa is literally baking. As I write, two-thirds of the way through July, Iowa City has received no rain this month. Zero. None. Nothing. Nada. In the Hawkeye State, water levels are dangerously low, and burn bans are dangerously numerous. “Tinder box” is the metaphor of the day on the news.

The news from the West is even more frightening. More than 400 wildfires have burned over 100,000 acres in Utah. A woman fleeing the Colorado wildfires crashed her car in Idaho, igniting a wildfire. She was heading to her father’s house in Oregon. Two days before I write, the governor of Oregon declared a state of emergency due to the wildfires that had already destroyed over 75,000 acres in that state.

Far to the north and east, a day before I write, the news reports that an iceberg twice the size of Manhattan has broken off a glacier in Greenland—the same sheet that “calved” another massive iceberg just two years ago.

The Johnson County Landfill fire is not exactly a part of climate change. But, like climate change, it is a symptom of the devastation of our modern human lifestyle. Beyond the enormous waste that piles up before our eyes in a landfill, the fire is due in large part to a “solution” to a problem that just created another problem. What caught on fire in the landfill were shredded tires used as a lining. These tires, of course, are a result of our obsession with the personal automobile. Seems like a good solution to waste that does not biodegrade—until it results in a fire that you can’t put out

I take back my statement that landfill waste piles up before our eyes. That’s really my point—it doesn’t pile up before our eyes. We have an amazing capacity to compartmentalize and wish our problems away. The refuse collector takes our garbage away once a week, and it disappears into thin air, right? Out of sight, out of mind. Someday, the temperatures and rainfall will return to “normal,” right? (It will rain again—but we also seem to ignore that our “rain events,” as the meteorologists now like to call them, are increasingly severe and voluminous.) Two days before I write, the governor of Iowa held a public forum in Mt. Pleasant about the drought. As blogger Paul Deaton pointed out, any mention of climate change among the speeches and discussion from the governor, federal and state agencies, the Iowa Farm Bureau and various farm producer associations was conspicuously absent.

In the television show Lost, the “smoke monster” plagued the island’s castaways. This large plume of black smoke would appear before certain characters amidst strange clanking and strident moaning sounds, usually with deadly results. Before their execution, the lost souls would stare into the dark, dense vapor and see images of their past, especially great sins. As the black plume rose above the Iowa City skyline for two and a half weeks in May and June, I thought of Lost’s smoke monster. I thought that we really need to peer intently into its face to see the history of our own environmental abuses. Likewise, we need to stare into the flames of this summer’s heat and drought and see—and acknowledge—the fires of hell that we have wrought ourselves.

The landfill fire has merely been covered up—it will continue to burn underground for weeks. In June, much of the world met for a 20th-anniversary Rio environmental summit, which accomplished nothing. President Barack Obama—the leader of the country that produces nearly 20% of global CO2 emissions, consumes 30% of the world’s resources and produces 30% of the world’s waste, and counts only 5% of the world’s population—did not attend. Even if we freeze all emissions and economic activity at current levels—an unlikely scenario—we have damaged the earth so much that climatological feedback loops will continue to increase temperatures, sea levels, ocean acidity and extreme weather. Until and unless we stare into the smoke and fire of human-created climate change and sincerely confront how much we drive, fly, air-condition, produce, consume, throw away and much more, the disasters of 2012 will become the norm rather than the record. In many ways, they already have.

At least while Nero fiddled, only Rome burned. Today, while the world fiddles, the earth is aflame.