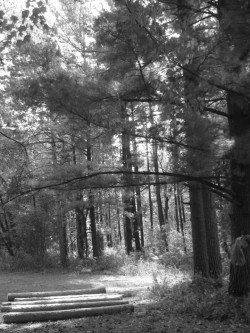 I went to Wisconsin, and all I brought back were a bunch of bark shavings from a red pine tree.

This fall, I attended a “Land Ethic Leader” workshop at the Aldo Leopold Center near Baraboo, Wisconsin. If you don’t know, Aldo Leopold—born and raised in Burlington, Iowa—is arguably the twentieth century’s greatest conservationist. He authored the classic A Sand County Almanac, the book that introduced the most fundamental principle of ecology and environmentalism, the land ethic. In Leopold’s own words, “All ethics evolved so far rest upon a single premise: that the individual is a member of a community of interdependent parts. . . The land ethic simply enlarges the boundaries of the community to include soils, waters, plants, and animals, or collectively: the land. . . . A thing is right when it tends to preserve the integrity, stability, and beauty of the biotic community. It is wrong when it tends otherwise.”

Leopold also virtually invented ecological restoration, masterminding the University of Wisconsin-Madison Arboretum, the first and still largest restored ecosystem in the United States. The second-oldest ecological restoration is on the old farm on which Leopold’s shack (an old chicken coop) sits—the place where he and his family spent nearly fifteen years in the 1930s and 1940s planting native prairie and woodland plants.

That’s where my bark shavings came from. As part of our workshop, we engaged in a work project—pulling invasive goldenrod from the prairie on the Leopold shack grounds and debarking some trees. The Leopolds planted about 30,000 trees on the land, and the Leopold Foundation—which now owns the land and has built the Leopold Center (much of which was constructed from “Leopold trees”) down the road a mile or so—is selectively culling these now-mature trees due to overcrowding. The garage at the Center needed some new ceiling log trusses, so our job was to debark some of the red pines for that purpose. 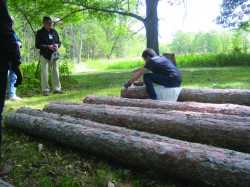 After some hand-tool peeling of half of a twenty-foot log, my shift was done. But before I wandered off to pull goldenrod from the Leopold prairie, I collected several of my bark shavings and tucked them away to take home. Great, just what I need—more old pieces of wood to add to my odd collection of mementos.

Except for books, I’m not that much of a packrat. I don’t save napkins from weddings or collect spoons emblazoned with pictures of cities I’ve visited. But now and then, I connect with some objects that resonate with significance to me, and I squirrel them away for my collection of Tom’s Important Oddities and Objects of Admiration.

Among my most prized possessions is an old wooden roof shingle from Sigurd Olson’s Listening Point cabin near Ely, Minnesota. Sigurd Olson is another of my naturalist/conversationist heroes. He is of about the same generation as Aldo Leopold and was one of the guiding lights in establishing what is now the Boundary Waters Canoe Area Wilderness as well as such other prominent wilderness areas as Alaska’s Arctic National Wildlife Refuge. He also served as president of the Wilderness Society and helped draft the Wilderness Act of 1964. Olson owned a cabin on Burntside Lake near Ely that was his local refuge. He named the land it stood on Listening Point, which became the subject of one of his several beautifully written books about the wilderness. The land and cabin are now owned by the Listening Point Foundation, and when I visited there several years ago, Chuck Wick (the vice president of the LPF) asked if I would like to take one of the original roof shingles home with me, which had been removed because they were reroofing the cabin. My thanks and acceptance were unhesitating.

I have some local meaningful objects of place, too. When the Old Capitol dome tragically burned in 2001, I went out onto the Pentacrest the next day and picked up a few small charred pieces of wood off the lawn. When the Shambaugh House—in which I worked for a year for the University of Iowa Honors Program, my office being Bertha Shambaugh’s studio—was moved down Clinton Street ten years ago, I scooted on over to the site before it was bulldozed and picked up a couple of foundation bricks.

In her book True Wealth, Juliet Schor calls for a “true materialism.” She says we should not become less materialistic but more so—that is, we must understand, appreciate and value the material of our consumer products in a much deeper way so that we actually consume less. My objects of admiration are not consumer products, but my acquisitive tendency flows from a powerful connection to the material that resonates with Schor’s idea of “true materialism.” My connection with these material items is literally palpable. I am touching the cabin roof under which Sigurd Olson rested, dreamed, and thought. I am touching the wood touched by the workmen of more than 160 years ago who built the dome under which the state of Iowa was created. I am touching the foundation of the home of two of our greatest local historical figures, and who, within those walls, entertained the likes of Amelia Earhart, Thornton Wilder, Jane Addams and Hamlin Garland above these very same Amana red bricks.

For me, these objects erase time through their material reality. They allow me to literally touch the people and moments of history that are important to me. They are not mementos in the sense of merely sparking memory, but, in my pidgin Latin, metactos, touching history.

So it’s no wonder that I brought home some fragrant red pine bark shavings from Wisconsin. These were from the trees touched, nurtured, and grown by the Leopolds—maybe Aldo himself—in one of the most important ecological restorations in history. For me to sit on a log from one of those trees, to peel bark with my own hands and sweat, and to have a little bit of my work added to the Leopold Center itself was and is a signal honor and privilege. And whenever I rub my fingers gently over one of those thin, delicate peels of bark that I brought home, I will touch the greatness of Aldo Leopold in the most palpable way I possibly can.

As a newly minted Leopold Center Land Ethic Leader, Thomas Dean has the screening rights to show the new documentary Green Fire: Aldo Leopold and a Land Ethic for Our Time. If you would like to schedule a screening and discussion of this film for your group or organization, let Tom know at thomaskdean@mchsi.com. He might even bring his bark shavings.