History doesn’t always repeat itself, but sometimes there are frightening echoes.

Saturday at Jack Trice Stadium in Ames, Iowa, racist supporters of Donald Trump made clear that the memory of the martyred football player Jack Trice has all but been forgotten.

Trice, who’s father had been a Buffalo Soldier and slave, was the first black football player to wear the Iowa State uniform. The night before his first game at Minnesota, in a separate hotel from his teammates, he wrote a heartbreaking letter to his family, friends and fans: 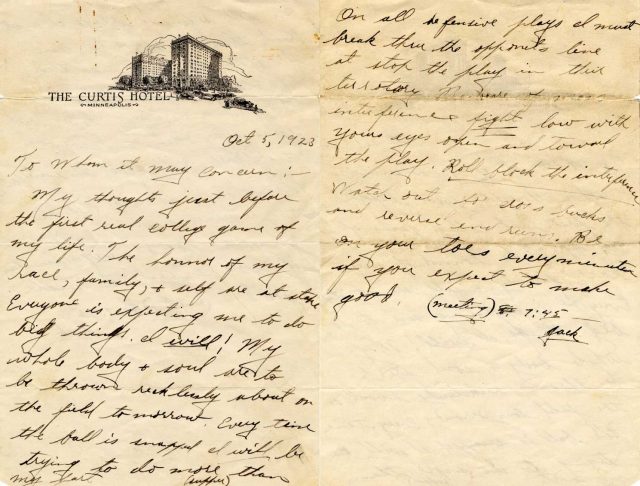 My thoughts just before the first real college game of my life. The honor of my race, family, and self is at stake. Everyone is expecting me to do big things. I will!

My whole body and soul are to be thrown recklessly about the field tomorrow. Everytime the ball is snapped, I will be trying to do more than my part.

On all defensive plays I must break thru the opponents’ line and stop the play in their territory. Beware of mass interference – – fight low with your eyes open and toward the play. Roll-back the interference. Watch out for cross bucks and reverse end runs.

Be on your toes every minute if you expect to make good.

The next day, October 6, 1923, on his second play of the game, a Gopher tackle broke Jack Trice’s collarbone. He continued to play but wouldn’t finish the game.

In the third quarter, flat on his back, several Gophers trampled him. He died two days later from the injuries and as a result the Cyclones refused to play Minnesota again until 1989.

Fast forward to Saturday’s in-state matchup in Ames between the Hawkeyes and the Cyclones. In this video, one Trump supporter in an Iowa State shirt can be heard telling people, “If it ain’t white, it ain’t right, Donald Trump!” In the background of the tailgating party stands Jack Trice Stadium.

Here, an ISU fan seems to call for armed border police, shooting to kill anyone who crosses the border illegally:

In this video, another Trump supporter was caught shredding a protester’s poster which read simply, “Our lives begin to end the day we become silent about the things that matter.”

A stunned crowd cheered her actions in front of the small group of students of color who were peacefully holding signs with anti-racist messages.

Before heading to the tailgate at Jack Trice Stadium, at a speech in Boone, Iowa, Trump had singled out rival Ben Carson, who is his closest competitor in several polls, implying that Carson didn’t have what it takes to run the country, “I don’t think Ben has the energy,” Trump said.

Ben Carson, a retired neurosurgeon and one of the most admired men in the world according to one poll, is the only black candidate in the race for the presidency.

Trump also repeatedly claimed to be the “surging” candidate, not Carson, as some pollsters are saying.

He later chided Hillary Clinton for talking about his “tone” on the campaign trail. He has also knocked Jeb Bush for supposedly making similar remarks.

This is not the first time Trump supporters have shown their ugly side, at an Alabama rally, one Trump-head yelled, “white power” during a speech. Trump has been silent about a slew of recent endorsements from white supremacists and neo-Nazis across the country but he has claimed to have “a great relationship with the blacks.”

For the record, Minnesota continued its racist football tradition against the University of Iowa, whose Hawkeyes had several black players in the 1930s. Against the Gophers, the Hawks’ back Ozzie Smith was targeted by the defense and lost consciousness three times in the first half before exiting the match.

That 1935 game began the long tradition of the famous Floyd of Rosedale trophy.