Donald Trump went from billionaire businessman to billionaire Republican presidential nominee during day two of the Republican National Convention. After a “Roll Call of the States” on Tuesday night, House Speaker Paul Ryan declared Trump the winner of the nomination — with the New York delegation putting him well over the 1,237 delegates Trump needed to win, reported NBC News.

Trump’s nomination comes with the challenge of uniting the Republican party he’s divided with his ism-filled rhetoric against Muslims, Latinos, women and disabled people.

Monday night indicated a rocky start for the Trump campaign. First, a protest against Trump’s candidacy ultimately proved unsuccessful, but not before images of it were streamed live on television. Then Melania Trump was accused of plagiarizing lines in her prime-time speech from First Lady Michelle Obama’s 2008 Democratic National Convention speech. Was the speech an act of plagiarism? Decide for yourself:

After a day of the addressing the accusations, Trump’s campaign came out on top with the nomination — despite doubt by many political experts — and the now Republican presidential nominee celebrated via Twitter shortly after. 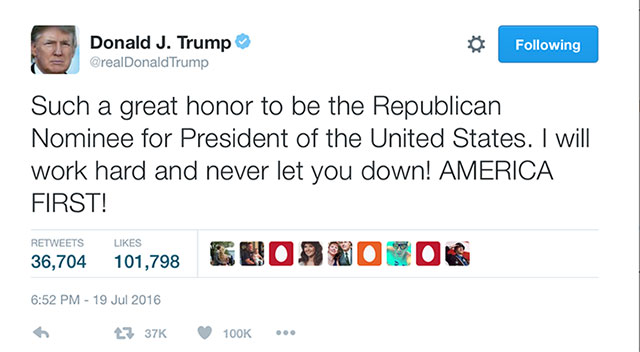 He later addressed convention attendees through a live satellite link from Trump Tower in New York City, reported The Guardian.

“I am so proud to be your nominee for president of the United States,” Trump said. “With your vote today, this stage of the presidential process has come to a close.”