Welcome back to football, fans of the sport and/or binge drinking. The Big Ten season opener against Wisconsin glimmers on the horizon, and with it comes the sick dread of unspecified mayhem that only a true Hawkeye fan can understand. Will we play the spoiler to someone else’s championship season (Ohio State last year, anyone?) or lose gimme games to complete cream puffs (shakes fist at Northwestern, Purdue)?

While gridiron glory comes and goes, we believe that every tailgate party should be a win. Whether you’re camped in a renovated school bus at Kinnick or swiggin’ Natty Lite out of the trunk of your Chevy Malibu in the Old Cap ramp, there’s no wrong way to pregame.

A great tailgate requires three things: a well-stocked cooler, an excellent portable speaker and inspired trash-talk. Since not everyone can afford to add the Big Ten Network to their cable package, we’re arming you with snackable football facts you can put in your pocket for just the right party moment. Let’s start close to home: 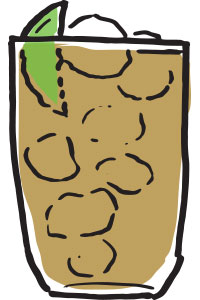 Cocktail of choice: Dark & Stormy
Shots on: Safeties!
Bets on: Amani Jones. The self-described “hardest hitter on the team” has big cleats to fill in replacing Josey Jewell. But this undersized ball of energy’s got mad swagger, and in spite of a rough game one, odds are he’ll still show out this season.
Impress your friends: First-team All-American running back Mekhi Sargent is a ju-co transfer from Iowa Western Community College, home of the Reivers. What’s a reiver? A river pirate. Sargent holds the Reivers’ single-season rushing record — Can I get an “ahoy” and an “amen”?
Most likely to succeed: The O-line. Kirk’s humble assassins came out strong in the season opener down two starters. There’s nowhere to go but up.
Least likely to succeed: The flavor in Kirk’s Big Red gum post Q1.
Study up on: How the three-headed running back monster of Sargent, Young and Kelly-Martin fares as the season develops. 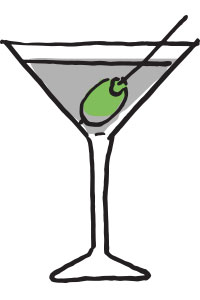 Cocktail of choice: Gin martini with a blue cheese-stuffed olive
Shots on: Jonathan Taylor fumbles
Bets on: The game coming down to pass coverage. We cover Wisconsin’s strong receiving corps, we golden.
Impress your friends: Coach Paul Chryst has coached three starting QBs currently suiting up in the NFL. Can you name ’em?
Most likely to succeed: QB Alex Hornibrook and RB Jonathan Taylor, a one-two threat for the Hawkeye O-line.
Least likely to succeed: Wisconsin receivers who don’t protect the ball. This Hawkeye D is on a fumble like white on Wonder Bread.
Study up on: The standings. Wisconsin dropped a slot in the AP poll after an opening day win. What kind of voodoo math is that, voters? 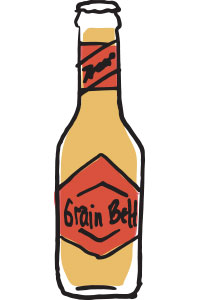 Cocktail of choice: Grain Belt beer
Shots on: “Ski U Mah” chants
Bets on: The Hawkeye D-line messing with newbie QB Zack Annexstad’s head. A frosh is a frosh is a frosh.
Impress your friends: The last time the Golden Gophers won a conference championship was in 1967, but because they split the victory three ways (with Indiana and Purdue) they didn’t end up at the Rose Bowl. Or any bowl game. At all. I guess the Cheez-It Bowl wasn’t a thing yet.
Most likely to succeed: A Gopher defense that held 10 of 12 opponents to 5.6 yards per play or fewer has the potential to plug any gaps in our running game.
Least likely to succeed: Minnesota’s backups. If injuries come into play, these newbs have barely touched the turf.
Study up on: Row the Boat. While it may come across as a silly slogan, it actually celebrates the “never give up” spirit of second-year coach P.J. Fleck, whose infant son died of a heart condition. 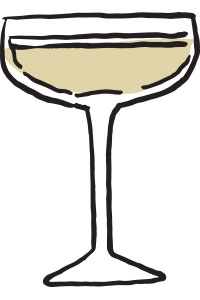 Cocktail of choice: The Hoosier (vodka, rum, vermouth)
Shots on: Sacks
Bets on: True freshman quarterback Michael Penix seeing some playing time.
Impress your friends with: Hoosier is a demonym (a word that describes the natives of a specific place). No one can agree on what it actually means.
Most likely to succeed: Clean offensive play from the Hoosiers. If they’re not the most stacked line-up, they are one of the more disciplined.
Least likely to succeed: A very young IU defense could give Nate Stanley the breathing room he needs to open up the offense.
Study up on: Is there any benefit to a left-handed quarterback, or are they just harder to catch? Talk amongst yourselves. 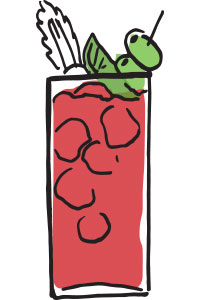 Cocktail of choice: Clamato Bloody Mary
Shots on: Any image of a turtle on its back.
Bets on: Inspired Terrapin play all season in honor of fallen teammate Jordan McNair, no. 79.
Impress your friends with: Maryland’s fight song includes a shout out to the “Black and Gold.” Thanks, guys!
Most likely to succeed: An experienced Terps defense led by Antoine Brooks, Jr.
Least likely to succeed: Trick plays. We’re ready for you, Coach Canada.
Study up on: Jeshaun Jones earned Freshman of the Week honors when he scored three different touchdowns three different ways in the first three touches of his first college game. Damn. Get to know the name. 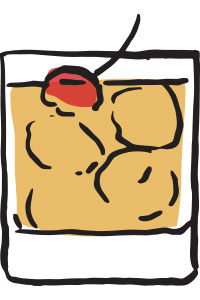 Cocktail of choice: The Red Lion (gin, Grand Marnier, orange juice, lemon juice, sugar rim)
Shots on: Trace McSorley Heisman mentions
Bets on: Iowa. Whatever their record, after last year’s last-minute defeat, Hawks are comin’ at this game with a grudge.
Impress your friends: By reciting the play-by-play of Adrian Clayborn’s 2009 blocked punt verbatim. Reenactments encouraged.
Most likely to succeed: McSorley will probably pull out some kind of last-minute trickery, as per the script.
Least likely to succeed: Penn State’s struggling tackles might just give our three RBs a little daylight to dream on.
Study up on: Does a Penn State team that barely beat Appalachian State deserve the hype? 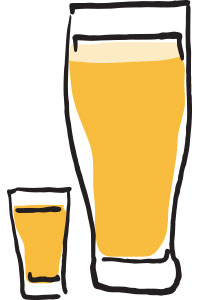 Cocktail of choice: A Boilermaker is a glass of beer and a shot of whiskey. Take the shot, down the froth and Bob’s your uncle.
Shots on: Replays of last year’s defeat. Eek.
Impress your friends: After high school, Purdue Coach Jeff Brohm was drafted to the majors (in baseball, that is) by the Montreal Expos. He took a football scholarship at Louisville instead.
Most likely to succeed: Rondale Moore’s 313-yard debut vs. Northwestern is no fluke. This guy’s fun to watch — and a serious threat.
Least likely to succeed: If hit-and-miss QB Elijah Sindelar is still starting, he’ll likely get buried by the Hawkeye D-line.
Study up on: Will Stanley be comfortable enough in the pocket at this point in the season to put up some semblance of a passing attack against this young defense? Let’s hope this is an easy answer by Nov. 3, folks. 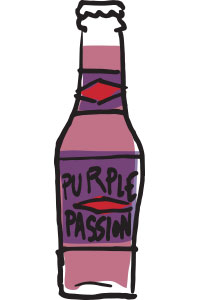 Cocktail of choice: Purple Passion (sorry)
Shots on: Graphics that include a Northwestern player’s GPA.
Impress your friends with: In 1972, the student body voted to rename the school’s mascot from the generic Wildcats to the trippy Purple Haze. School administrators declined to approve the change, alas.
Most likely to succeed: Sophomore Jeremy Larkin, who racked up 143 yards on the Hawks last year.
Least likely to succeed: Pat Fitzgerald’s buzz cut
Study up on: Fitzgerald switched up quarterbacks Clayton Thorson (coming off ACL surgery) and TJ Green mid-series in game one. Is it a strategy, necessity or brewing controversy? 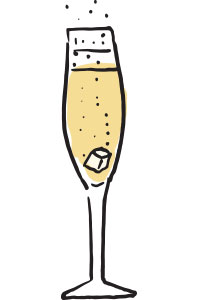 Cocktail of choice: “Champaign” Cocktail (angostura bitters, cognac, champagne, sugar cube)
Shots on: Lovie Smith replica beard sightings
Impress your friend with: The knowledge that this school has NO mascot. The rightly controversial Chief Illiniwek was retired in 2007 and has yet to be replaced.
Most likely to succeed: Jake Hansen and Del’Shawn Phillips, star-quality linebackers who shine up a lackluster Illini roster.
Least likely to succeed: Coming off a 2-10 season, this entire team isn’t likely to succeed anytime soon.
Study up on: Smith’s facial hair metamorphosis 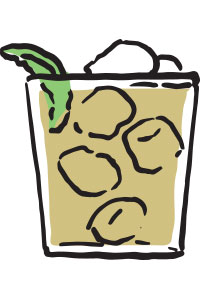 Cocktail of choice: The Big Red (bourbon and cider with cinnamon & ginger)
Shots on: Every terrible Frost pun. They’ll keep coming, even if the weather made it real clear how it feels about those on opening day.
Bets on: At least three replays of Coach Scott Frost’s infamous Flea Kicker play
Impress your friend by: Rushing the field and popping Lil’ Red.
Most likely to succeed: Are they running the triple-option again? If so, that.
Least likely to succeed: A young, injury-ridden offensive line that didn’t do much to protect a beleaguered Tommy Armstrong last season.
Study up on: As of this writing, we’ve yet to see this team play. So try and catch their second “first” game, maybe?

This article was originally published in Little Village issue 250. Illustrations by Jordan Sellergren.