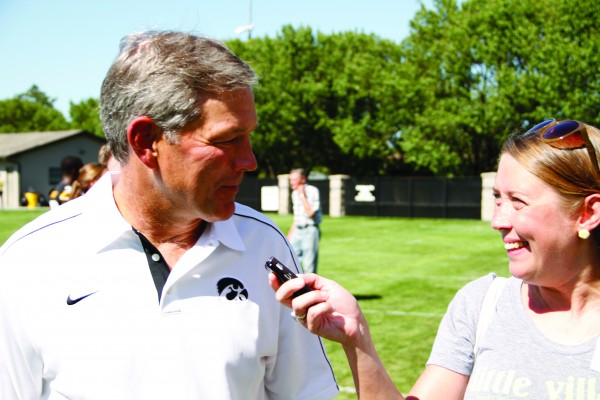 When it comes time for Hawkeye Football Media Day, Little Village always puts our Hawks to the test with a barrage of really tough questions, like “What’s on your iPod?” and “Where is your favorite place to eat in Iowa City?”

Through intrepid, hard-nosed reporting, we uncovered the team’s interesting array of personal tastes, from the inexplicably popular Rascal Flats to the always adored Panchero’s. Let’s peek inside the hearts and minds of the 2012 Iowa Hawkeyes and learn a little about their lives beyond the playing field

Bypassed Nate Kaeding for most consecutive PATs in Iowa history on Sept. 22.

On his iPod: A lot of oldies. Bruce Springsteen, Phil Collins, REO Speedwagon

33 tackles on the year as of Oct. 1
On his iPod: Rick Ross, a little Drake, Big Sean. Being in Iowa, I like country music a lot. They [my teammates] gave me some tunes to listen to and I really enjoyed it. It’s laid back and it’s chill.
Favorite Restaurant in IC: I’m a big Jimmy
Johns fan. I mean it’s quick—it’s freaky fast. Wait, did I just promote them?
What will he miss most about playing in Kinnick? The fans. The fans here are so loyal, they’re crazy. They’re so much for the Hawks and I’m going to miss it.

The meat in an All-Iowa Offensive Line sandwich. Over 30 career starts as a Hawk.
On your iPod: The Black Keys: They just put out an album and it’s definitely one of my favorites.
What’s it like having to do everything your big brother (Offensive Line Coach Brian Ferentz) tells you? It’s not a lot different. Not a lot has changed since I was younger. Now he’s just got an official title.
What will you miss most about playing in Kinnick? Coming out of the tunnel before games. It’s a really cool feeling—there’s nothing else like it. It’s a thrill I’m sure I’ll be chasing the rest of my life.

Posted double-digit tackles in the Hawks’ first four outings.
On his iPod: I’ve got a mixture of everything: rap, Drake & Lil Wayne. Then I also listen to Kenny Chesney and Rascal Flats.
Favorite restaurant in IC: The only place I eat in Iowa City is Panchero’s, but in Coralville, if that counts, I like Applebee’s.

35th Hawkeye wide receiver to catch for over 1,000 yards

On his iPod: J. Cole, Raphael Saadiq—I’ve got some blues on there. I’m trying to get more country, considering that I am here.

Most anticipated game of the season: Every game. We have to compete in every game.

Favorite thing about playing in Kinnick: The swarm. Coming out—nothing can replace that feeling. It never changes. I’ve done it a lot of times, and the same feeling comes back every time.

Favorite place to eat in Iowa City: Pita Pit. I eat it, like, every single day. It’s a bad habit.

is the consistency that the fans show. Every single game they show up and they’re electric. They’re ready to go, just like we are—and that’s the most fun.

On his iPod: Of Monsters & Men

Favorite place to eat in IC: I’m going to give a shout-out to my little sister here and say Hu-Hot. She makes me go there every time she’s in town.

On his iPod: I just downloaded the song “Home” by Phillip Phillips.

Recently broke the 100-game mark* at the University of Iowa. 3-time Big Ten Coach of the Year

On his iPod: I’ve got a lot of stuff on my iPod right now. Doesn’t everybody? I mean, everything. Whatever my kids program in there.

Favorite place to eat in IC: You know I’m not answering that.

Voice of the Hawkeyes since 1996

On his iPod: Frank Sinatra

Favorite place to eat in IC: I love the Wig and Pen, that’s where I usually hang out after the game.

Most anticipated game: Michigan. They don’t think we can beat ‘em four times in a row, we’ve only kicked their butt three times in a row. So we’re coming up there, they think they’re going to pound us—we’ll see.

-Stephanie Catlett wins some and loses some.

*EDIT: In the print edition we inaccurately listed this milestone as being Ferentz’ 200th win as a Hawkeye. Sorry for the error! -LV