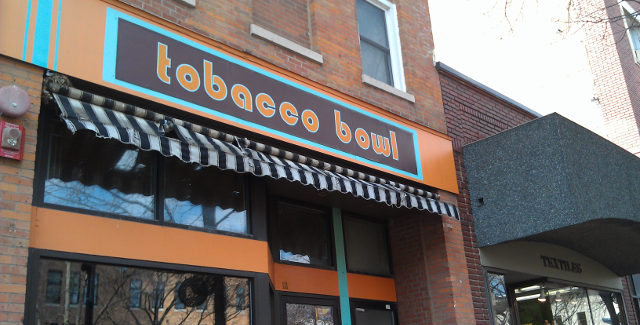 The Tobacco Bowl will soon shut its doors, owner Tommy Connolly said. The decision to close the business, which has stood resilient despite a slew of local smoking bans, comes after 25 years of business in downtown Iowa City.

Connolly plans to open up a pizza parlor and video arcade in the Tobacco Bowl’s place, noting that the smoke shop will close by “mid-Late April” in order to allow the new business to open in tandem with the UI’s 2014 fall semester. It’s a decision he’s been contemplating for a couple years along with business partners Cory Ingle and Luther Moss, Connolly says.

“It’s ongoing, the last god-knows-how-many years, this sentiment in America today is fairly anti-smoking, or at least publicly expressed that way,” Connolly said. “And we’ve gotten occasional complaints from residential people and some of the store owners about some of the tobacco smoke, so that sort of gave us a little push in that direction.”

Connolly is aware of the impact this move might have on the Tobacco Bowl’s regulars. The coffee and smoke shop has long been an eclectic hangout for Iowa Citians looking for a hot coffee and fresh pack of cigarettes. Its closure will, no doubt, leave many feeling a little lost.

“I think people are shocked because the business has been here so long,” Connolly said. “It was assumed that it would survive any catastrophe, natural disaster or Armageddon-like events.”

The decision to close, in part, comes down to economics, Connolly says. The Tobacco Bowl was able to stay in business as a smoke-friendly venue because more than 80 percent of its sales come from tobacco or tobacco-related products. However, anti-smoking policies continue to find traction in Iowa while the number of people who smoke is diminishing.

“I think we wanted to have a successful and viable business, and I think eventually, within the next few years, we would be unable to conduct business in the way we conduct it now, so I’d rather be ahead of the curve than behind the curve,” he said.

Connolly and his collaborators hope to be open by the “middle to the late part of the summer.” He says that the current hurdles involve getting the space redesigned to accommodate more extensive food service — refrigeration, ventilation equipment and so on.

“Once we get that all done, we go to the city,” he said, adding that the new business will plan on serving both beer and wine. “I think it’ll be a great thing.”

Whether or not Iowa City has seen the last of the Tobacco Bowl is another question. Connolly says it’s a tricky prospect, but don’t count out the possibility.

“I have looked for other spaces. Nobody wants the Tobacco Bowl, currently,” he said. “I would not say absolutely no to another Tobacco Bowl, but right now, there is not a space that can or will accommodate us.”

As far as the current Tobacco Bowl goes, Connolly says he will certainly miss his business of 25 years. He helped his mother open up the shop in 1990, back when there were a handful of family-owned Tobacco Bowls scattered around eastern Iowa.

“This is definitely something unique, something that is a throwback that we’ll probably never see again in our lifetime or lifetimes from now,” Connolly said. “There are so many health aspects to smoking, questionable health aspects … but the idea of coffee and cigarettes, it’s just a classic idea.”