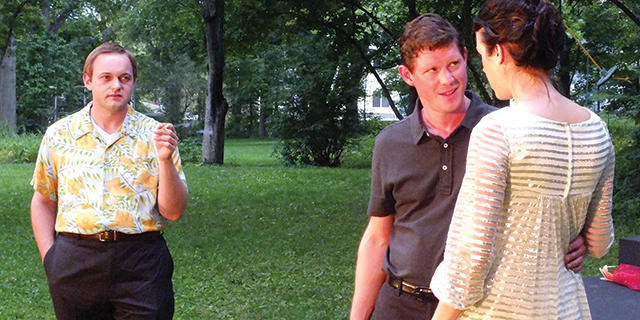 Between professional theatres in the Amanas and Iowa City, and community theatres as widespread as Mount Vernon-Lisbon and Washington, there has been a recent blossoming of opportunities in eastern Iowa for actors, directors and other theatre artists to explore their craft, both as volunteers and for pay. In the center of it all, along the I-380 strip between Cedar Rapids and Iowa City, new theatre companies are popping up regularly.

Marion’s Giving Tree Theater opened its doors barely a year ago, but competition is stiff for available roles and quality is high. Passionate theatre artists are regularly eschewing the narrow definitions of “community” to drive 30-45 minutes or more from their hometowns, each way, on a daily basis, to explore these wider opportunities.

Community theatre is as thriving as ever, but lately, we’ve been starting to rethink what we mean by “community.” This past weekend, the 1975 musical A Chorus Line opened on the main stage at Theatre Cedar Rapids (TCR). This is the closing show to their 2014-15 season, and also the only main stage show this season not directed by a member of the theatre’s staff. Instead, Angie Toomsen, a Cedar Rapids native who now resides in Iowa City, is helming her first main stage production at TCR (having directed three times before in their Grandon Studio). Toomsen will also be directing the first main stage show of their upcoming season, September’s Calendar Girls.

More than ever before, actors, directors, and technicians are traveling up and down the Corridor to explore a wider variety of options. In the crowded theatre scene, individual companies are increasingly developing individual identities. Artists know which companies to go to for a certain type of theatrical experience. Some do plays that are edgier, some focus on a full-immersion, all-hands-on-deck experience, some do nothing but the classics, some have more financial support than others. No matter what sort of artistic experience you are seeking, you can find a company dedicated to that vision in the Corridor.

Even when there’s overlap, it breeds diversity of opportunities instead of competition and division. Cedar Rapids actor Rob Merritt, who starred as Judas in City Circle Acting Company’s production of Jesus Christ Superstar in the 2013-14 season, notes that “…there are some performers who choose to stick with just one organization, but I’ve always found that getting out there to work with as many different theatres, directors and organizations as I can makes me a better and more well-rounded performer, as well as a more informed member of the area arts community.”

Just two months ago, an article in the Press-Citizen reported that we might see regular bus service between Cedar Rapids and Iowa City by 2017. This might be welcome news to many performers and theatregoers. Commuting between the cities is expensive and time consuming, but the more opportunities arise, the more people believe that it’s worth it.

“I will admit that the rising cost of gas has made me more reluctant to do, say, a summer show in Marshalltown than I was back in the summer of 2007,” Merritt said. “But even then, there’s ways around that … There’s a large crop of Iowa City actors who regularly come to Cedar Rapids to perform with TCR, and they often carpool.”

Kevin Moore, a cast member in A Chorus Line and an Iowa City resident, agrees.

“Over the past year or so, I’ve been fortunate to be heavily involved in 7 community theater shows – all but one of them in Cedar Rapids,” he said. “I also did fight choreography for a show in Anamosa and another in Iowa City … it’s worth the extra time in the car and the gas money. Once you’ve expanded your own circle, more and more opportunities come to you. But it does make for some later nights, some skipped meals.” This sacrifice is especially notable in cases where artists are not compensated.

Toomsen is no stranger to those long drives and late nights. Aside from her work with TCR, she drove regularly between Iowa City and Waterloo when she was working on Red for Fourth Room Theatre, and also directed Rabbit Hole and August: Osage County for Urban Theatre Project in Cedar Rapids, all of which were volunteer gigs. Still, she says that over the many years she’s been commuting between Iowa City and Cedar Rapids, they’ve always seemed like “one community” to her. Likewise, Moore “think[s] of it more like connecting with distant family than a shrinking of the area.”

“If anything, I think we’re all expanding together,” Moore said.

That notion of family is particularly poignant in the cutthroat world of theatre that A Chorus Line captures so well. There’s a constant tension between competition and community, but there is no overt sense of territoriality among theatre artists in the Corridor. Rather, there is an overwhelming sense of coming together into “one singular sensation …” and that grows more true every day.