There will be live music and “culinary delights” in the streets of downtown Iowa City this weekend as the Soul and Blues Festival returns to close out the Summer of the Arts. The festival kicks off at 5 p.m. on Friday, when the Culinary Delights and Beverage Garden opens. The music starts 90 minutes later as the FunkDaddies take the main stage.

The festival runs through Saturday night, and so do the street closures necessary to accommodate it. Starting at 6 a.m. on Friday, Clinton Street will be blocked off from Jefferson to Washington Street. Iowa Avenue will also be closed from Clinton to Dubuque Street. The streets are scheduled to reopen at 2 a.m. on Sunday. 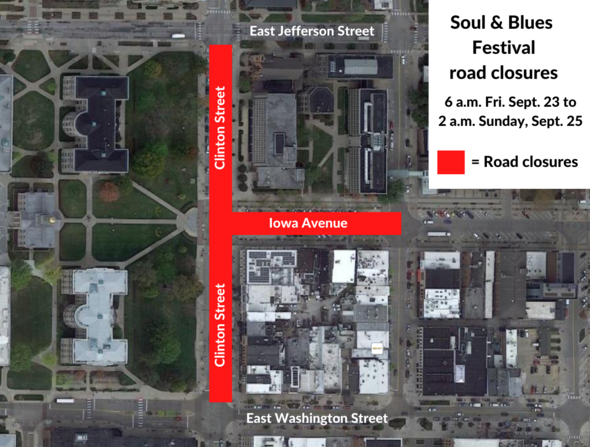 Because of the closure on Clinton, the downtown bus hub will temporarily move from its normal location next to the Old Capitol Town Center to Court Street between Clinton and Dubuque, near the Court Street Transportation Center. The change will occur when bus service begins on Friday morning. Because there is no service on Sundays, the downtown bus interchange will return to its normal location on Monday morning.

In addition to FunkDaddies, this year’s Soul and Blue Festival will feature performances from Kevin Burt, the D.L Perkins Singers and other groups. There will also be a demonstration of Caribbean dances near the intersection of Clinton and Washington starting at 1:30 p.m. on Saturday.

The Soul and Blues Festival is free and open to the public.