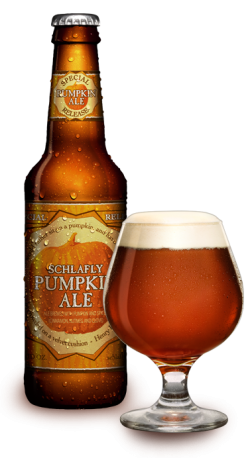 Though I love carving pumpkins for Halloween, and finishing Thanksgiving dinner with a slice of pumpkin pie, pumpkin-flavored beer never appealed to me; it seemed like a bad combination. However, it was something I knew I should try and I recently got the chance to sample 17 different pumpkin ales with my beer tasting group. Much to my surprise, I realized pumpkin and beer are actually a tasty pair.

At some point during the tasting, we began ordering the bottles from best to worst. After all was said and done, standing at the front was Schlafly Pumpkin Ale.

Pumpkin Ale is ideally served in a good ol’ pint glass. The color is nearing deep amber and has an orange, pumpkin-esque tint. Two fingers of fuzzy, very effervescent, eggshell-colored head will dissipate fairly quickly to leave a thin lacing and ring around the edge.

The delicious aroma of pumpkin pie is noticeable from an arm’s length away. It has a solid malt base of caramel but the pumpkin pie spices (which got me psyched for autumn) are unmistakable. Upon first sip, the cinnamon and clove tickle the nostrils, providing a warm, spicy kick. It has a lightly toasted malt and caramel base with toffee, nutmeg and brown sugar, which makes me wonder if Schlafly has simply added pumpkin and spice to its Oktoberfest or Scotch Ale recipe. There is a little fruit, too, so it is like eating a piece of pumpkin pie on a plate with cherry pie crumbs and filling leftovers.