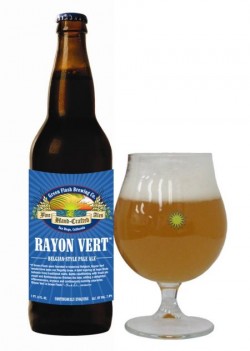 September is a time for football (oh, sacred game) and funk. Brettanomyces funk, that is.

Affectionately known as Brett, Brettanomyces is a strain of yeast used in many Belgian beers. It imparts a dank funkiness commonly described as being similar to a barnyard or horse blanket. To me, it smells and tastes like an old, musty, farmhouse basement. It is a little off-putting at first and I was not a fan for a long time. However, Brett and I became well acquainted recently and I am now proud to admit to being a funk convert.

Saison is a fitting “Bretty” style for September, but I am recommending something funkier—something that induced childhood memories of my aunt and uncle’s farm: Rayon Vert, brewed by San Diego’s Green Flash Brewing Company.

Ideally served in a tulip glass, Rayon Vert (“green flash” in French) is a rusty caramel color. A dense, eggshell-colored head will rise quickly and dissipate very slowly, leaving the inside of the glass lined with trails of foam. The first whiff offers a load of funky fresh Brett, which tends to dominate. Underneath are musty farmhouse basement, hoppy citrus (a little grapefruit and orange), pine spice, perhaps a little caramel and a nice fruit complexity with scents of apple and pear. It also has a hint of raisins. The mouthfeel is smooth and dry. Alhough the Brett has less influence with the taste, the funkiness is still very prominent. The pale ale qualities—the citrus, pine and caramel—are given room to shine. The Brett and caramel begin to balance as the beer warms and the fruits emerge. Each sip leaves the tongue tingling with a lasting bitterness.