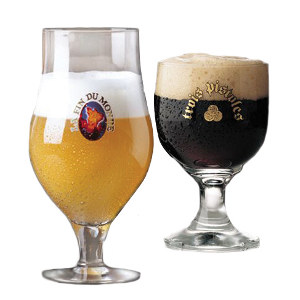 Though Canada’s Thanksgiving tradition may be a little different, our hockey-loving neighbors to the north brew the ideal beer pairings for a US-style Turkey Day.

Tripel is excellent with turkey and La Fin du Monde, brewed by Unibroue in Chambly, Quebec, is a perfect choice for Thanksgiving dinner. Ideally poured into a snifter or a tulip, La Fin du Monde is a cloudy gold color. Its aroma tingles the nostrils with a massive dose of banana, apple, bready yeast and clove and coriander spice. The first sip is a mélange of vodka-like booze and spice and fruit sweetness from the smell. As it warms, the booze fades and the fruit and spice take over.

Though a good match for the Thanksgiving meal, La Fin du Monde lacks the darker malts we crave when the weather turns cold. Thankfully, there is Trois Pistoles, also brewed by Unibroue. Served in a tulip, Trois Pistoles is a sexy, dark caramel brown with ruby tones. As a strong dark ale, it still has a fair amount of sweet apple and banana in the smell and taste, but also features cherry, plum, fig, chocolate and caramel. It is port-like and warming, perfect for sipping during the post-nap period.

Both beers pay tribute to French-Canadian folklore and I highly recommend checking out Unibroue’s website (www.unibroue.com) for the details. Unibroue has by far the best brewery website I have visited, with legend stories narrated by a Quebecois with a thick accent and the francophone aversion to pronouncing h’s.