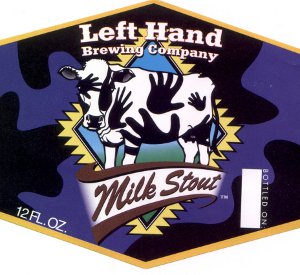 Not only does the March equinox mark the change of seasons, the transition to spring swings beer cravings back toward the light, citrusy and often hoppier brews enjoyed during T-shirt and shorts weather. But screw that. There is tons of time for IPAs and hefeweizens later. March means St. Patrick’s Day, when the Chicago River turns a lighter green and Irish stout reigns supreme.

But instead of drinking one of the Irish Big Three–Guinness, Murphy’s or Beamish–I recommend honoring Saint Patrick by raising a pint of Milk Stout, brewed by the Left Hand Brewing Company.

Milk Stout is a tasty compromise: It offers the bitter, roasted coffee and chocolate characteristics dark beer hardliners expect and the “stout light” creaminess and mass drinkability offered by the Big Three. When poured into a pint glass, Milk Stout is a jet black that is a shade away from being opaque. Out of a bottle, a couple fingers of creamy, tan head develop and dissipate slowly to leave a bubbly lacing, thin film and ring around the age. On draft, a thick Guinness-like cap rises and keeps its form throughout the pint.

Milk stout has a delicious chocolate aroma, which is a blend of both roasted dark chocolate and sweet milk chocolate. Along with a subtle roasted coffee presence, a little vanilla, toffee and nutmeg are mixed in as well. The mouthfeel is very smooth and creamy and the taste has a backbone of roasted chocolate and coffee malts. However, the bitterness, which scares many away from stout, is countered and balanced with the sweetness of milk chocolate and milk.