When golfing, Kent Ball will drink Miller Lite because it’s refreshing, watery and usually cheaper than bottled water. It is a beer, he said, that he does not have to think about on hot, sunny days; all he needs to do is crack open a can and drink. But when patronizing his favorite pub, Ball prefers something “a little heavier and a little nicer”—something flavorful he can sit back with, contemplate and enjoy.

“Not that I wouldn’t enjoy a Miller Lite,” he said. “Every beer has its place and that’s what I am more or less trying to put out there.” Starting this September, Ball, a self-confessed “beer geek” with a decade of home brewing experience, will be sharing his knowledge through a new course at Kirkwood Community College.

“Beer Appreciation from Alt to Zwickel” is intended to be a starting point for anyone of-age that is interested in learning about beer, trying new styles and understanding the current craft-beer explosion.

From learning about post-Prohibition alcohol and distribution laws (eroding each year to the delight of brewers and drinkers) to sampling regional styles and understanding the factors involved in their crafting, the class offers students a beer education that Ball says will benefit Iowa’s beer culture as a whole.

John’s Grocery Manager Doug Alberhasky—the main organizer behind Iowa City Brewfest, in its 17th year this October—agrees that greater beer appreciation and open-mindedness is pivotal in making the state an attractive market for outside brewers and fostering a robust in-state brewing industry.

Between the classes and the upcoming Iowa City Brewfest, this fall will be an excellent time for beer-curious locals to enlighten their taste buds. While many adore and skillfully navigate the vast selection of beers found at many local establishments, Ball said that others may remain daunted by the colorful array of unfamiliar tap handles currently multiplying in Iowa City pubs. They may want to try something new, but they don’t know where to start. For Ball, it’s those curious but timid drinkers that he hopes will sign up for his class. 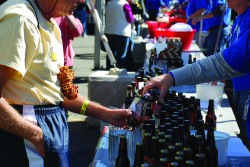 Each session will meet once for two hours at the restaurant inside Kirkwood’s student operated hotel in Cedar Rapids. Ball, who works as a lab coordinator at Kirkwood’s Iowa City campus, plans to outline the history of beer, how it is made, and how so many flavors can be developed from just four essential ingredients. The majority of class will be dedicated to sampling 12 different beers, each an example of their respective style and origin. Some of the sample beers on the syllabus will come from different countries, illustrating the international influences that are at play in domestic craft-beers. This context will also enable drinkers to identify the ways brewers in the U.S. have put their own twist on traditional styles.

Although he will tailor his instruction based on what his students already know, Ball said he wants the class to serve as an introduction to all things hopped. He also hopes it will spark a thirst and appreciation for new things.

“What I am trying to do is convince people that locally made and regionally made beer is good, and here’s why,” Ball said. “Not that there’s anything wrong with yellow, fizzy beer. But here’s why you should try new things.”

At the time of this writing, four sessions of the course are scheduled and those interested in registering can do so online at kirkwood.augusoft.net, though Ball said students may also need to call the registration office. Each class is limited to 10-12 students and costs $39.

Appreciation is also the creed of the Iowa City Brewfest on Oct. 6. With drink tickets, a logo sampling glass and festival brochure in hand, beer aficionados and newcomers alike will be able to sample beers from across the country and around the world. 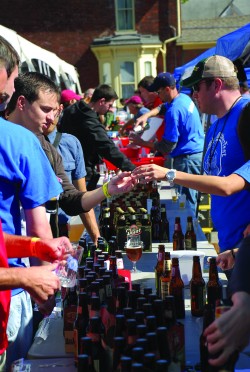 Though many things about Brewfest are the same as last year—it is once again paired with the Northside Oktoberfest and will be located in the parking lot across from Pagliai’s Pizza—there is one major difference: more beer. This year’s Brewfest will feature over 500 different brews; 378 were offered in 2011. Alberhasky attributes the surge to an increase in the number of vendors, including a few who, in previous years, opted to attend the renowned Great American Beer Festival, which sometimes conflicts but does not this year. Brewfest is also recognized for its informed and educated drinkers, making it an ideal destination for brewers eager to personally interact with and offer their products to beer lovers. Another contributing factor, Alberhasky said, is the fact that more breweries are distributing to Iowa, thanks in large part to the state’s increasing beer knowledge, thirst for craft brews, and the easing of the state’s restrictive alcohol distribution law in 2010.

Ball said that festivals like Brewfest go hand-in-hand with the kind of beer appreciation and education he is offering in his class. Beer festivals, he said, offer an opportunity for curious drinkers to sample small amounts of beer they are unfamiliar with and are hesitant to buy in six-packs.

Ticket prices for Brewfest are unchanged. For $20, attendees will be given a 200-milliliter kolsch tasting glass and eight drink tickets. Those who purchase $40 “Brewmaster” tickets will be given a gold-rimmed, 250-milliliter pilsner glass, 20 drink tickets and the privilege to enter one hour early—a perk Alberhasky said is well worth the price because a number of brewers are bringing exclusive, “one-off” beers. Unlike other festivals, which offer rare samples at certain times, Brewfest is first-come, first-served starting when Brewmaster ticketholders are admitted at 11 a.m.

“Some of this stuff is so rare that if you don’t get the Brewmaster ticket, you’re not going to have a chance of getting some of these really good beers,” he said.

Tickets are limited to 3,000 and can be purchased online at johnsgrocery.com, in person at John’s Grocery, or at the festival if still available. General admission begins at noon.