At first, Brian Sekafetz thought the Moose Lodge was a place where old men drank beer. However, since becoming a member in 1996, he has learned it is about more than drinks with buddies. So much more, in fact, it gives him goosebumps to talk about it.

From caring for 220 underprivileged children at the organization’s “Child City,” accommodating its elderly members at a retirement facility in Florida and acts of selfless charity at the local level, the work of Moose International and its one million members is a testament to Sekafetz’ goosebumps.

“It’s amazing to think you are a part of that,” he said, pointing to the dimples covering his arm. “I can’t believe they can do all this.”

This month, the Iowa City Moose Lodge will mark its 100th anniversary. To celebrate, the nearly 800 local Moose members are inviting the public to join family-friendly festivities on August 24 and 25, which will include live bands, a hog roast and free TV and membership raffles. Sekafetz, the associate president of the Moose’s Iowa/Eastern Nebraska association, said the celebrations are an opportunity for everyone to visit, volunteer, donate and learn about the Moose.

Originally located downtown on the top two floors of the current MidWestOne Bank building, the Iowa City Moose Lodge moved to a location on Dover Street in 1972 and then to its current home at 3151 Highway 6 East in 1999. Its moose statue along the side of the highway greets motorists as they enter the city. Yet despite the Lodge’s prominent location and longtime local presence and outreach, it is an organization that few outsiders are familiar with.

“We’ve been around for 100 years, but we’re a pretty good secret,” said Keith Garling, the bar manager at the Iowa City lodge. “Be careful on your second visit,” he advised, “because you just get sucked in.” 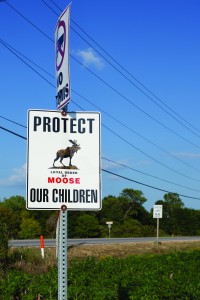 Founded in 1888, the Loyal Order of Moose was reorganized in 1906 under the leadership of James J. Davis, a future Secretary of Labor and U.S. Senator from Pennsylvania. Darryl Mellema, a spokesperson for Moose International, said Davis was the driving force that made the organization what it is today and was the visionary behind the Moose’s main commitment: Mooseheart. A 1,000-acre campus in Aurora, Illinois, Mooseheart is a tightly knit and self-sustaining community where disadvantaged children are given a second chance—a place that David Beecher, the treasurer at the Iowa City lodge, described as Mayberry.

Originally intended to foster the children of Moose members who died or had fallen on hard times, Mooseheart has welcomed needy children from any family since 1994. Beecher said the children come from desperate situations where parents or guardians are unable to provide adequate care and are either recommended by family or by lodges that have become aware of a needy situation. Mellema said Mooseheart accepts children of all ages until they graduate from high school and could recall one instance when a baby was delivered on-site and was there from birth.

Once at Mooseheart, children are cared for by three “family teachers”—one married couple and one single person—in homes with eight or ten other children. They attend on-site schools accredited by the Illinois Department of Education, receive vocational training in high school and attend religious services with their Mooseheart families.

“The idea is to give kids a second chance,” said Mellema. “No matter what happened to kids before they got [to Mooseheart] this gives them the opportunity to leave here and get that second start in life.”

Along with Mooseheart, the Moose also operate Moosehaven, a community for retired and dependent members in Orange Park, Florida. Both are funded by donations and the organization’s $60 annual membership fee. Moose International also donates money to the Safe Surfin’ Foundation, sponsors Special Olympics softball tournaments and works with the Salvation Army. Members at the Iowa City lodge donate to the UIHC burn unit, have adopted a local school to provide needed supplies and are active with the Hawkeye Area Community Action Program. According to the Moose International website, the Loyal Order of Moose and Women of the Moose offer $70 million worth of donations and volunteer service in the U.S., Canada, Bermuda and Great Britain.

The Iowa City Family Center—home to a Little League baseball field, four horseshoe pits, a pond stocked with fish and campsites—is not only used for business training, fundraisers benefiting locals in need and a meeting place for youth-associated organizations, it also serves as the focal point for Moose members. And although the fraternity is about more than frosty beverages, there is a bar where members can and do rest their elbows.

However, it is more than a commercial venture where an owner reaps the profits. It is a gathering place with a purpose. Manning the taps every night is Garling, who knows everyone’s first name, their children’s first names and what they drink. Family-oriented, it is a place where rowdiness and four-letter words are not welcome. It is a safe place where everyone looks after one another; where purses, wallets and cell phones can be left on tables without worry. The money spent on food and drinks fund the lodge and small donations are collected for Mooseheart and local outreach every night. Even when unwinding with beers, the Moose contribute to their community. However, it is a members-only establishment. Friends and guests are welcome, though they must be accompanied by members—which, Sekafetz said, makes the upcoming centennial celebration and open house an ideal opportunity for the public to visit the lodge and learn about the Moose.