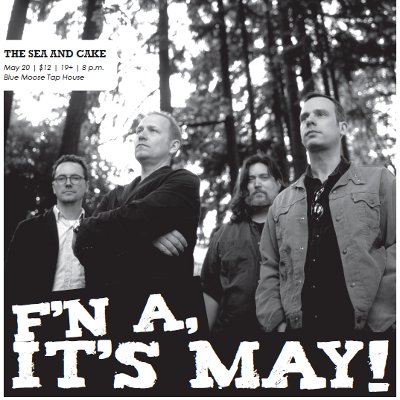 On May 1, 1965, at an annual celebration in Prague, Allen Ginsberg was crowned the King of May. The tradition of May Day and its royalty was founded back in who-knows-when for reasons of who-knows-what (pagans or something), but on this particular May Day, ’60s counterculture and communist oppression met head-on. After Ginsberg was paraded through the streets, the police got suspicious; he was followed; notebooks containing his poems “disappeared.” Next thing you know, he’s expelled from the country and put on a plane to London. It’s on this plane ride that he composes “Kraj Majales (King of May).” It’s classic Ginsberg: “I am the King of May who sleeps with teenagers laughing.” A recording of Ginsberg reading the poem was released some thirty years later, on the compilation Holy Soul Jelly Roll.

Flashforward to 1997: Ginsberg passes away and ’90s folk goddess Natalie Merchant composes “King of May” in his honor. Appearing on her wildly uneven album Ophelia, “King of May” is fantastic, and not just because it has the same chord progression and vocal melody as Enrique Iglesias’s “Hero” (G, Em, C, D). Like Iglesias’s pop gem, “King of May” is equal parts sentimentality and bombast, filled with organs and violins, and by the end Merchant’s voice is working so hard to cut through it all it sounds like she’s shouting. In truth, I think Ginsberg would have hated it (“Lift your voices up / drink your loving cups”), but it’s so embarrassing that I find it weirdly touching. And that voice.

The song about May perhaps more fitting to Ginsberg’s legacy was also written by a ’90s folk goddess: Liz Phair. Her “May Queen” is a critique of the life of a “rock and roll Ken doll,” all about drugs and mind expansion and older people having sex with younger ones. And at only 2 minutes long, the song itself is an exercise in fleeting pleasures. The point is this: May is a time to let your hair down and your beard grow, spread oats and seeds, fight oppression and explore, in Ginsberg’s words, “the power of sexual youth.” And if all of that kind of grosses you out, then do all those things vicariously, through the raw power of live rock and roll.

Whew! Is this column even about live music anymore!? Who cares! Well, actually, I do, so let’s get to it.

I’ve used the phrase “indie rock royalty” far too much on these pages, but this month five (!)
extremely talented songwriters are passing through town on the legends circuit. The Pharmacists frontman Ted Leo is rescheduling his cancelled January gig, which I wrote about at the time. He’s at Gabe’s on May 7. John Vanderslice, a man revered as much for his work behind the mixing board as his work in front of it, comes to The Mill on May 1. Having worked closely with The Mountain Goats on their last several albums and tours, Vanderslice has a robust back catalog of his own, including the best song ever written about a pet rabbit (“Angela,” from 2005’s Pixel Revolt). His most recent album is this year’s White Wilderness.

The Sea and Cake will be at the Blue Moose on May 20, led as always by Sam Prekop. Prekop fronted one of the best bands of the ’90s, Shrimp Boat—1993’s Cavale is a masterpiece—but once they broke up The Sea and Cake emerged from the rubble, retaining the heavily jazz-influenced rock sound. Their music is “difficult,” in a sense that it’s “smart,” but it’s in no way stuffy. I think, at their best, they make beautiful, delicate songs. We’ll see what happens; I’ve never seen this band live and this is probably my most anticipated show of the month.

Also coming to town is Freedy Johnston, whose hit song “Bad Reputation” earned him a good one way back in 1994. That song was produced by Butch Vig, who was also the mastermind behind Nirvana’s Nevermind. Vig has been known to tour as a part of Johnston’s band, so you might have a chance to meet a recording legend. Johnston has been steadily making albums since and he will be touring behind last year’s Rain on the City. I saw him a while back in Davenport; he’s a fun and gracious performer. He’ll be with the incredibly gifted power-pop songsmith Marshall Crenshaw at the Yacht Club on May 11.

In local news this month, internationally respected noise-psych trio Wet Hair will be having a record release party at the Wherehouse on May 7, with Broken Water. The album, In Vogue Spirit, was recorded right here in town by Luke Tweedy and will be out on Minneapolis-based Destijl Records.

Now, notoriously this column has ignored or, on occasion, ridiculed cover bands, but the local writers’ workshop folks who comprise The Dads are in a more refined tradition of cover musicians, like, say Three Dog Night. The Dads are playing after Talk Art at the Mill on May 4, and they’ll bring with them a slew of songs you know by heart. I already know them by heart, since they practice next door to me, so trust me on this one.