The 10-year anniversary of the devastating floods of 2008 lends itself to a certain kind of narrative — one in which we extol the resilience of our communities and shine a light on successes that seem to point toward a future filled with sunshine after the rain. And to be fair, that narrative is, in many ways, true. But it isn’t the whole story.

Clint Twedt-Ball, executive director of Matthew 25 in Cedar Rapids, is well aware of this. Matthew 25 was founded in 2006 to strengthen and elevate west side neighborhoods in the city. The flood and its aftermath thrust the organization into the forefront of recovery efforts, and from that position, Twedt-Ball has had a good view of those who have found success in recovery and those who are still feeling the negative impact of the disaster.

“I think the people who are struggling are people like those who used up all of their retirement savings to come back from the flood and will never recover that money,” Twedt-Ball says. “Or people that are in a neighborhood that hasn’t been fully revitalized. If they were in their house for one to five years and then their property value dropped by 40 percent after the flood and it’s just gotten back up to where it originally was, they’ve essentially been trapped in their house and unable to sell it unless they were willing to sell it at loss. And there are a lot of folks in that situation.”

He points to the vagaries of the 100-year floodplain, which he says “weaves and bobs its way in and out of blocks,” often leaving just a house or two unable to rebuild due to stipulations regarding what’s permissible in the flood zone. “They are stuck in this cycle with the value of their house not going up and their neighbors are stuck with these one or two houses on a block that can’t be fully rehabbed.” 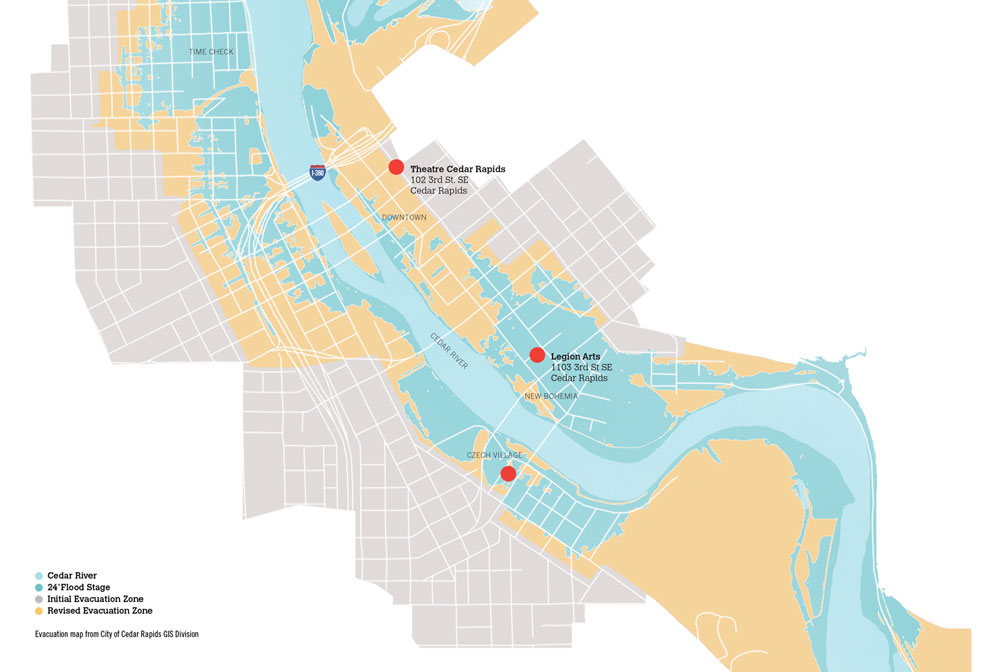 Twedt-Ball also notes that homeowners in the hazard and mitigation areas who didn’t accept a buyout will likely have their homes taken via eminent domain.

All of that said, Twedt-Ball is quick to acknowledge the positives of the post-flood period, as well.

“The community as a whole has benefited from the flood,” he says. “When you look at NewBo and how it’s come back or Kingston Village the way it’s starting to come back … Overall, you’d have to say the region has been strengthened because of this.”

While New Bo City Market and various entertainment and dining venues get much of the attention when the neighborhood is considered, Twedt-Ball suggests it is organizations like the Iowa Startup Accelerator and the tech business moving in that will ultimately define the neighborhood.

“I think long term, it’s going to have to be some of those larger, stable businesses that anchor it and push it forward,” he says.

He identifies Kingston Village as an example of how success and inaction can exist side-by-side. On the one hand, the area near the McGrath Amphitheater is seeing growth in terms of housing and businesses, signaling a successful blending of public and private sector investment. On the other hand, Taylor Elementary School, which serves the Kingston Village area, is set to be closed, which is arguably in keeping with the state of its immediate neighborhood.

Twedt-Ball sees ways in which local government can help shrink the gap between the post-flood losers and winners.

“There are definitely policy solutions, and we’ve tried to support some of those, like the city working on developing a vacant and blighted property ordinance. I think that’s led some landlords who weren’t reinvesting in their properties deciding to get out of the landlord business. That’s helped,” he says. “This neighborhood finance corporation that the city’s developing where people will be able to get $10,000, essentially forgivable, loans to invest in their properties, I think that’s going to be a huge help to neighborhoods like the Taylor neighborhood. And then long term, I think we’re going to have to look at questions like how do we have inclusionary and supportive housing? How do we invest in affordable housing? Those are going to be important things to think about.”

In the meantime, Twedt-Ball encourages everyone in the community to remember both the positive and the negative side of the flood recovery story. His organization faces both every day.

Rob Cline is an arts professional, freelance writer and author of Murder by the Slice. This article was originally published in Little Village issue 244.