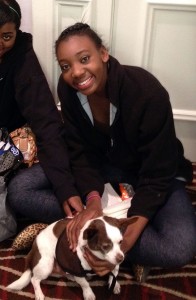 CLEAR Creek Amana Highschool student Mbololwa Mundia and her sister Nakola Nyambe waited patiently with their mother earlier this morning to hear First Lady Michelle Obama address an overflow crowd at a campaign rally for the President at the Iowa City Sheraton Hotel.

Ms. Mundia proclaimed to DLP, First in the Nation stringer and guardian of mr. dog: “I love her! She is my heroine and I love her!”

The seventeen year-old and sister [peaking out in the left-hand corner] are pictured here with Delta-certified Therapy Pet and afore-mentioned canine-around-town “mr. dog.”

The First Lady is scheduled to appear later today at the Sioux City Convention Center.

The political view from Johnson County is not always crystal clear, given its preponderance of Democratic Party supporters, but President Obama’s ground game does seem to be firing on all pistons with peak efficiency in Iowa as Election Day approaches.