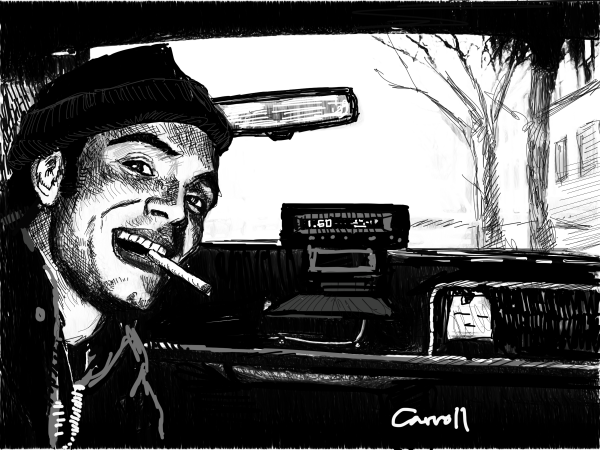 The last in a twelve-part series by Vic Pasternak.  Thanks for the stories, Vic!  Readers can find the rest of this series here.

The woman gave me the address of a mansion out on the parkway and said, “Step on it!”

Then she confessed, in a smaller voice, “I’ve just always wanted to say that.”

“I’ve always wanted someone to ask.”

We roared out of downtown, weaving traffic and clipping every light on the yellow.

The lady was my kind of damsel, with the only distress showing in her skinny jeans. She wore black hair chopped at the shoulders over a smart cut of leather jacket. Lady also wore on her married finger a glasscutter big as a hummingbird. A mom with tweens, I casually guessed, but by all appearances still built for speed.

She said, “My cowboy’s out of town and gramma’s got the kids.”

“Girls’ Night Out,” I hooted, perhaps too cheerfully, “Do you ever read Little Village?”

Alas, she did not.

My fair rider did, however, ask the inevitable: “So do you like driving a cab?”

“It’s not the lowest thing I’ve done for cash.”

“I think it’d be a barrel of monkeys.”

“Indeed but the monkeys are drunk and really pissed off.”

“So what would you do if not drive a cab?”

That got her attention.

“Danger begins at the threshold,” I went on. “No point to going in unless I’m a cop or a social worker. Or the coroner.”

She was gazing out at the shuttling dark, absently opening the palms of her hands to the knobs of her knees.

“Long ago,” I said, “when I was first at the wheel, I get this old drunk out of the CV Leg, that’s the American Legion in Coralville. I have to go inside and collect his sorry ass and carry his sixer to the cab because he can’t manage the upright position. Dude slams into the lot, dude piles against my taxi, dude carps when I fold his legs inside. Lifting up by the headrests, he gets wedged between the front seats and stays all the way to his house like that, mooing like a cow.”

My lady passenger was howling in laughter so I indulged with the richer details.

“Better than sixty, maybe forty, he’s a professional so it’s hard to tell. He lives in a basement apartment with the entry around the side which he naturally hadn’t shoveled all winter. But the barmaid gave me a $20 and told me to get him home safe, right? And maybe watching him flop in the snow got to me. Any case, I get out and help him indoors.

“So then I’m dragging him along, dude hanging off me on dropped knees and giving back no help at all. And his basement stairs are glazed with thick brows of ice so just looking at them feels like falling down. Sure enough, we both go thudding down the whole flight on our cans.

“Now I’m pissed and dude is groaning in a heap. Knowing he’d come home drunk, the mope, he hadn’t bothered locking his door, and I haul his besotted ass over the threshold by the hood of his coat. When I let a light on, I see in his back room he’s got a bedroll and a pile of clothes but not a stick of furniture anywhere except the table in his kitchen, and the table’s covered in empty liquor bottles.”

“Empty bottles—and that’s it? No chairs or anything?”

“Everything he ever needed by the fifth and gallon,” I said, supposing, “Or all of it he’s cared to keep. Old dude has even lined empties along the entire cinder footing going round the perimeter of his crib. I mean that’s a lot of booze to put away. The worth of years.”

“You have to write all this down,” she ordered, wiping laughter out of her cheeks.

I allowed our mood to hang a moment, allowing her to believe that my story might have finished.

“But then I turn to get out of there,” I went on, sounding haunted, “My old drunk buddy is staring back at me and all of a sudden he’s clear eyed and sure on his feet, grinning to show his teeth, and starting in with, ‘Now that you’re here why not sit your butt down?’

“I maneuver round him for the door but he snatches my elbow so I have to dump him over to get out, and he fights to keep hold of my leg, pleading in the sorriest voice, ‘Don’t go!’”
“Holy Jesus, that’s awful.”

The laugh riot had crashed but my fair rider was not overly revolted.

“I knocked him down and got out like I said. But that’s why Rule Number Three is ‘Never go inside their home.’”

She was delighted to consider my third rule in this new light and was still giggling it out when I wheeled into her driveway. I threw into park, which I only ever rarely do, and I let on the dome light so we could take in each others’ eyes.

Then I poked my chin toward the dark of her home.

She grinned, eyes blinking shocked, and she blushed, a bit flattered perhaps, having no idea my suggestion, however bold, stood hopelessly negated by Rule Number Two: ‘Never fuck any passenger(s), ever, ever-ever.’ And never mind how that was figured out.

The meter showed we’d broken twenty bucks getting out to her country manor. She handed me a $50, telling me proverbially to keep the change. Then she smiled at me once more and

I waited to drive off until she was inside.

At 12 hours a night, four nights of seven, and paid 34 cents on the dollar, sometimes just the idea of a thing is enough to scrape by.

Vic Pasternak is moving to Colorado to work security on a migrant cannabis farm. Thanks for reading.