Lets talk about September 2003 for a minute. There’s nothing particularly special about this period of time, but it did take place exactly ten years ago, which is as good of an excuse as any to look back at the September 2003 issue of Little Village magazine. What were we talking about ten years ago? Lets find out!

…The sky was falling

In 2003, our pre-recession economy was thumping along and eyes were turned, for the most part, toward issues of foreign policy. The early months of 2003 featured a bevy of Little Village articles regarding both the wars in Afghanistan and Iraq as well as the upcoming 2004 election (the previous month, we ran an endorsement of ‘frontrunner’ Howard Dean, whose campaign collapsed in miraculous fashion shortly after the Iowa Caucuses). Amid all the chaos, Little Village was there with plenty of its own bleary-eyed politicking.

We also ran a letter talking about this guy you may have heard of named Dennis Kucinich. Remember Dennis? We remember Dennis. He retired from public life only to become a political analyst for Fox News. Poor guy. 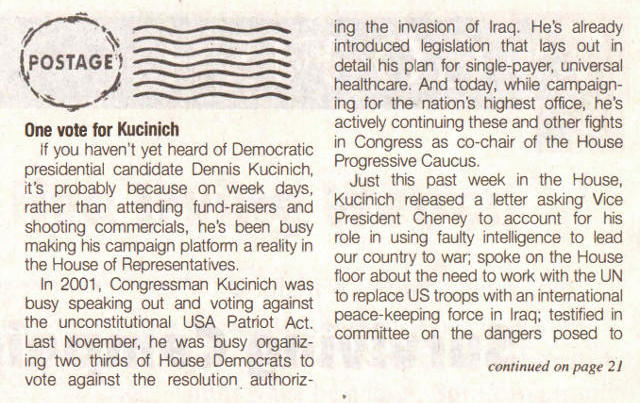 …Irving Weber made his arrival

Irving Weber’s weekly columns in the Press Citizen are still regarded as an unparalleled take on Iowa City’s local color. How do we know this? The most obvious indicator might be the 600 pound statue of Weber that sits at the intersection of Linn Street and Iowa Avenue. Alongside a number of local sponors, Steve Maxon and Doris Park donated the statue in 2003 as testament to Weber’s cherished contributions to Iowa City. Little Village columnist Thomas Dean, meanwhile, wrote an eloquent piece to accompany the new statue’s arrival:

…We ran a full page ad for Playboy?

Here’s something that caught me by surprise. In September 2003, we ran a full page ad for Playboy magazine. This particular issue had a special feature about “Girls of the Big 10,” which is probably what led Playboy to seek out local advertisers in the Midwest region. “Guys who get it, get it,” says the ad’s tagline, which is just the sort of thing a machismo magazine would say. You get it, right? You don’t want to be one of the people who doesn’t get it. 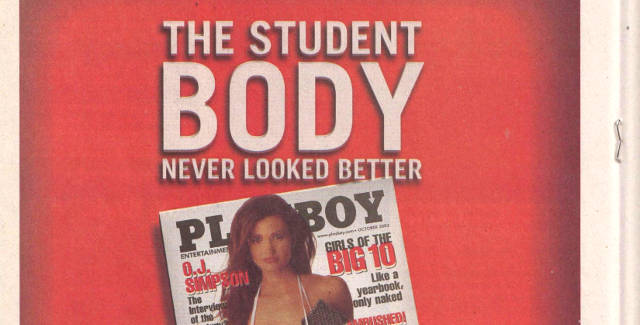 Speaking of unexpected advertisements, it’s worth pointing out this incredibly dubious ad from our August 2003 issue. Mike is apparently photographer who wants to take nude photos of amateur models for purposes unknown. Who’s Mike, you ask? Good question.

…Public Space One arrived on the scene 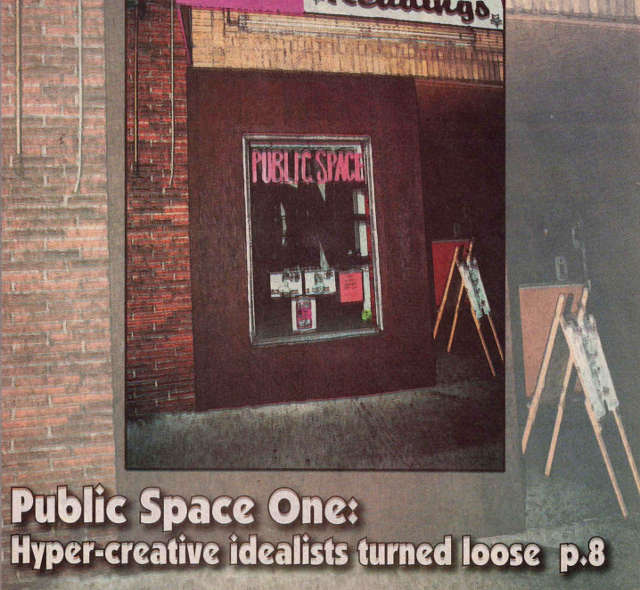 Ten years ago, Public Space ONE emerged as a new and exciting venue for Iowa City’s creative community. Originally located above the Deadwood Tavern, its arrival prompted a Little Village cover story, which characterized the project as “a bunch of hyper-creative idealists turned loose in a place of their very own.”

This mammoth article spans more than 4,000 words across seven pages, packing in far more detail than I could ever hope to convey in this single paragraph summary. What is most striking, however, is the tone. Public Space One is still largely an idea at this point, despite having found a physical home (albeit temporarily), and there is this overwhelming sense that so much is possible. The question of “what is Public Space One?” begins to materialize after a number of interviews conducted by the piece’s author, Adam Witte, but even after 4,000 words, the answer is still ethereal–a shifting and churning cloud of ideas. It’s the sort of idealistic energy that can only come with projects that lack precedent–projects that are new, and fresh and don’t quite fit into the neat little boxes we’ve already defined through consensus. 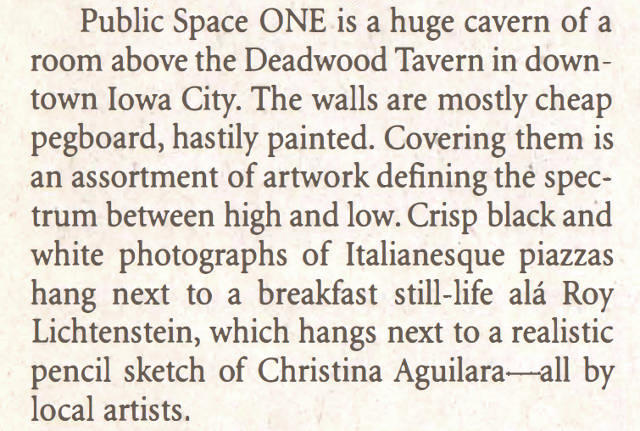 The Deadwood Tavern has always been a special kind of bar. It has pinball. It has carpet. It has charm. Regulars know it as one of the most community-oriented and affable bars in town — a place where owner Jim Bell has kept his finger on the pulse of Iowa City since buying the bar 22 years ago. This delightful ad from 2003 is a classic example of the Deadwood’s wry sensibility for local civics: 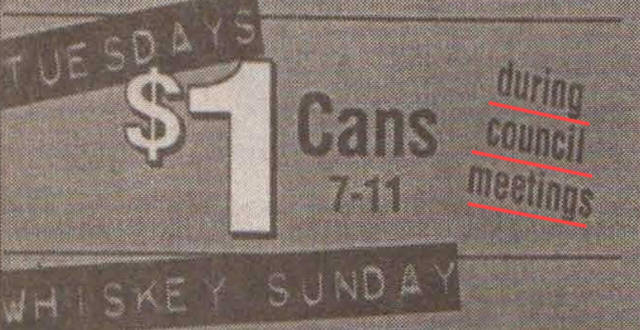 There are a couple of different conclusions to draw from this decade-old ad. Either Iowa City is so geared toward municipal politics that even our bars embrace the city hall zeitgeist, or rather, we’ll take any excuse to drink down a pint or two or ten. It’s probably a bit of both.

Ten years have come and gone since the tragic death of Ten Grand’s Matt Davis. In our September 2003 issue, Steve Horowitz paid tribute to Davis with this brief piece written in his memory. The musician had a resounding effect on those lucky enough to know him, as Horowitz’s piece can attest: 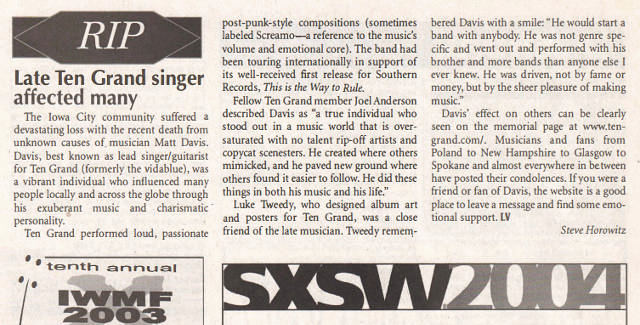