The spirit of our age walks on prosthetic limbs. Of course, humanity has always been fascinated by amputees. But whereas prosthetics were once a sign of creepiness, from Captain Ahab to Captain Hook, now they’re attached to sympathetic heroes. Think of Oscar Pistorius, the Olympic “Blade Runner,” sadly on trial for murdering his model-girlfriend; or Bethany Hamilton, the subject of Soul Surfer, who lost her left arm in a shark attack; or Aron Ralston, the subject of 127 Hours, who was trapped under a boulder until he self-amputated his right arm; or the athlete-model Aimee Mullins, whose collection of sexy prosthetic limbs includes jellyfish arms and jaguar legs replete with tail. Think of fictional characters like the jovial king in Brave or Inspector Gustave in Hugo. Now we have Rust and Bone, the new film by Jacques Audiard (playing at the Bijou March 8 through 14), in which the heart-amputatingly lovely Marion Cotillard plays Stéphanie, an Orca trainer who loses both of her legs to one of her hungry whales.

Rust and Bone begins with the unemployed Ali (Matthias Schoenaerts) and his young son Sam (Armand Verdure) fleeing to the south of France. Though his real ambition is to be a kick-boxer, Ali finds work as a bouncer in a club, where he becomes fascinated by the otherworldly Stéphanie. When she loses her legs in a freak accident, Stéphanie calls on him, and they strike up a sizzlingly sexual, albeit ambiguously romantic, relationship.

The unlikely presence of Ali is just what Stéphanie requires to repair her fractured sense of self. One of the most powerful scenes in Rust and Bone, the main image for its marketing, involves Ali carrying her on his back to the sea. Immediately after he deposits her in her element, he returns to the beach, sprawls out and falls asleep. The typical do-gooder would have lifeguarded over the legless Stéphanie as she breaststrokes in the big waves, but Ali’s lack of concern provides just the space she needs to recover her self-reliance.

However, if you think the movie is mainly about Stéphanie, you’ll end up feeling a little  confused by its last act. Try to resist the immense allure of Cotillard and remember that the story, as the beginning suggests, is about Ali, who is brought to life with an alchemical mix of disaffectedness and passion by Schoenaert, the Belgian actor best-known for Bullhead (2011). Full of the capacity for love, both for Stéphanie and his son, Ali must overcome his laissez-faire attitude toward life and channel his fierce subterranean feelings for others.

French films have always drawn on American culture for energy, but Rust and Bone’s American sensibilities are peculiarly strong. Aurdriard’s arty filmmaking will suddenly break into a peppy B-52s dance party. Sensitive character studies will come to a head with a kickboxing scene that Rocky Balboa would appreciate. On the one hand, you get to appreciate numerous shots of light bouncing on the water. On the other hand, the scene where Stéphanie limps out on her prosthetic limbs to rouse the beat-up Ali is guaranteed to jerk tears. The soundtrack—which veers from Bon Iver to Django Django, from Carte Blanche to Katy Perry—reflects the movie’s energies and ambivalences. 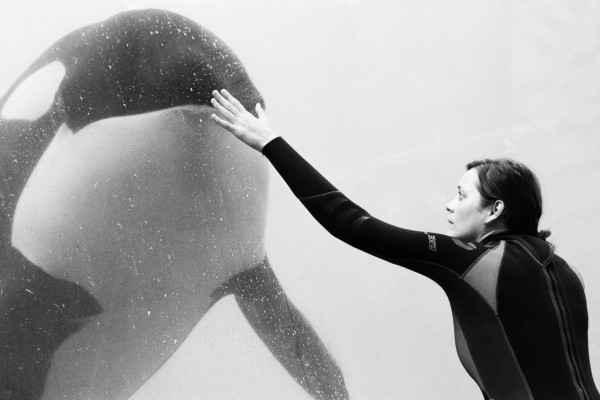 You could say that Rust and Bone itself walks on prosthetic limbs. It’s a French-Belgian film that’s American below the knees. It has something of the artistic heart and philosophical brain of the usual French film but lurches forward with a sentimental American plot. It has the same heart-warming uplift of a blade-runner in the Olympics, as well as some of the hidden darkness of an erstwhile hero on trial for murder. While some viewers will argue that the movie doesn’t quite cohere into an organic whole, my hunch is that most will believe in and root for this fascinating, limping, troubling, triumphant movie.