After a four-year hiatus, the Polk County Master Gardeners’ Garden Tour is back, highlighting 11 exceptional gardeners and garden enthusiasts across the county, including Urbandale, Clive, Des Moines and Ankeny. The tour is part of Iowa State University Extension and Outreach in Polk County. 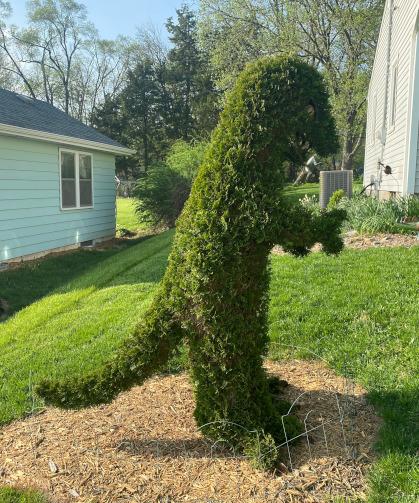 One stop on the tour — enticingly dubbed “That One Des Moines Garden!” in the Garden Tour lineup — is the south Des Moines home of Derek McKay, whose garden is filled with native Iowan plants and non-native dinosaurs. A T-rex-shaped shrubbery makes his garden hard to miss.

The T-Rex is made from live evergreen shrubs called arborvitae, of the species thuja. “So, I named that dinosaur Thuja. It’s just ’cause it was a cool sounding name,” he explained.

McKay enjoys quipping to his coworkers, “I have to leave and go feed my dinosaur.”

“Now people roll their eyes when I say it ’cause I’ve said it one too many times,” he giggles.

Throughout his entire garden you can find 13 dinosaurs of all sizes, along with a turtle and several dinosaur eggs tucked into the greenery.

“A lot of people ask me that question,” McKay said. “They assume that I have some kind of prior connection to [dinosaurs] in the past and the answer is I didn’t. I didn’t. I really don’t know the answer.”

He does know where his dino collection started, however. Six years ago he spotted a dinosaur statue while shopping at the Brass Armadillo Antique Mall in Des Moines. It occurred to him that dinosaurs might complement the Devonian fish fossils he had on display in his house.

“I just thought it would be really cool to tie in with the décor inside my house,” he said. That shopping trip to Brass Armadillo “was the spark and I just started from there. I started adding them and just one thing led to the next. Thirteen out here and a hundred inside later, this is my garden.”

“I just think it’s a really cool way to make my garden different and it’s fun,” McKay said, “and, you know, it’s my garden. It’s not anyone else’s but mine.”

McKay says he doesn’t remember who specifically inspired him to start gardening, but he knows he has always loved it. He does recall as a young boy seeing his mother, uncles and aunts digging into the dirt and bringing forth blooms of beauty. Growing up in northern Wisconsin, McKay was naturally integrated with nature. “I’ve always been interested in nature, natural things, and flowers.

In 2013, McKay graduated with a horticulture degree with high honors from the University Center Rochester in Minnesota. He then began working for Ted Lare Garden Center which eventually is what brought him to Des Moines less than a decade ago.

“I really enjoy it,” he said of the job. “It’s basically what I would consider it to be my dream job. I’m just helping people with their garden choices.”

“I definitely don’t see myself doing anything else anytime soon. It’s definitely where I feel like I need to be.”

McKay stumbled over words when trying to find the right ones to describe how he feels about his garden being featured in the 2022 Garden Tour.

He says that he is “Honored. I don’t know how to describe it, [but] it’s like honored. [I’m] hoping that my space is beautiful enough for that many people and, I don’t know. It’s a lot of mixture of different things. I’m excited about it. It is a very honorable thing to be chosen for that.”

Someone on the Garden Tour board had become a fan of McKay’s garden from seeing photos of his dinosaurs and bright colored flowers on Facebook.

“They contacted me,” McKay said. “It wasn’t something I asked for. They just thought my garden was cool and should be on the tour and they asked, and I said sure.”

He describes his garden as 90 percent native plants mixed with dinosaurs and non-native plants. Originally, McKay only grew native Iowan plants, but decided to incorporate outside plants for a challenge and to “add different looks into the garden.” He is now growing cacti and southern magnolias native to Georgia and Alabama. He has tried begonias that can be found in South and Central America, Africa and southern Asia, but he has had a hard time with them.

“I’m kind of also testing stuff that doesn’t normally fit in with Iowa gardens to see what can survive here,” he said.

Some advice that McKay gives to other gardeners is, “Don’t be afraid to try something out of the box, even if it says it doesn’t work. Native plants are easier to take care of and less maintenance in Iowa’s changing weather. Try to do more ground covers in your garden. It takes away the need for mulch and also it deals with a lot of the weeds in a more natural way, so you don’t have to mulch everything. I know a lot of gardeners find it a lot of work to do that continuously.”

McKay has ground cover in parts of his garden that are “young and still filling in,” but he is hoping that someday the whole garden will incorporate green mulch. “I think that will be something to really look into for a lot of gardeners,” he said.

Another piece of advice from McKay — his favorite part of gardening — is to admire your own garden.

“I really do take time, at least once a day, just to walk through,” he said. “We’re all out in the garden working, you have to actually take time to enjoy it. Especially when you have the weather we’ve had. Everything is blooming so fast, and it’s already gone.”

“I recommend going through your garden at least – I mean, you could do it once a day, that would be great. But try to do it once every three days ’cause it changes that fast and what I feel like when I go do that is just, I don’t know, a sense of peace. It’s just very calming and relieves a lot of my stress when I can just take a walk through and stroll and see how everything changes.”

McKay said he’s excited to appreciate the other gardens on the Polk County Garden Tour as well. “I would like to see pretty much most of people that are in the gardens. I think it would be cool to see everybody’s. Everyone’s different, the values in their garden that they have. As you know, mine is unique, everyone’s is unique too.”

The locations of each garden have not yet been disclosed to prevent premature viewing.

You can purchase tickets online for $10. The tour is on July 9 from 9 a.m. to 4 p.m., rain or shine. It begins at the Jackaline Baldwin Dunlap Park and Arboretum at 3020 Sherry Lane in Urbandale.