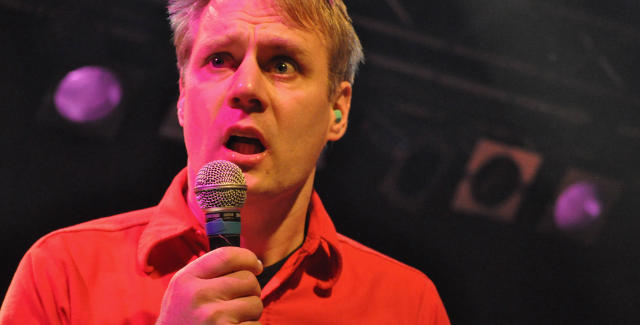 If you’re a fan of indie rock in almost any form or subgenre, your weekend just got made. Tomorrow night at PS-Z, Calvin Johnson of K Records fame, the Beat Happening, the Halo Benders and the Dub Narcotic Sound System will be performing an acoustic set. Funny how amazing shows like this tend to pop up in town.

For the past few years Johnson has been touring the states with his acoustic guitar, performing his droney ballads with his hypnotic, baritone voice. At times he’ll wander the stage, recite blues lyrics or croon gospel songs at makeshift shows in people’s apartments. At this point, it’s safe to call him a legend.

Your average, respectable record collection most likely has the K imprint and/or Johnson’s name plastered generously through the shelves. From the Make-Up (or more recently Chain & the Gang), to Old Time Relijun (anyone see that show at the Blue Moose last year? Wow.), to Modest Mouse, Built To Spill and Beck, Johnson has appeared on or produced many of the best indie records of the past 28 years. While some of his best contributions and productions — Mecca Normal, Beat Happening, Unrest — are long gone, Johnson still pounds the pavement with his impeccably clever pop songs.

And if you thought K Records and Johnson’s Dub Narcotic Sound Studio had gone the way of the dodo, you are wrong. They still send out a lively, monthly newsletter with contests for free recording time, tips from the studio engineers on recording and mastering and news on new releases.

Join up, come to the show and let’s hope he dances during his set. It’s my favorite part of his act.

Opening will be local acts Bryn Lov, Curt Oren and Sam Locke Ward, who incidentally has a fantastic new album out. Look for our review in the upcoming issue of Little Village. This show is all-ages, starts at 7 p.m. and costs $5. For practical purposes, Public Space One is now PS-Z and is located in the Wesley Center at 120 N. Dubuque St.