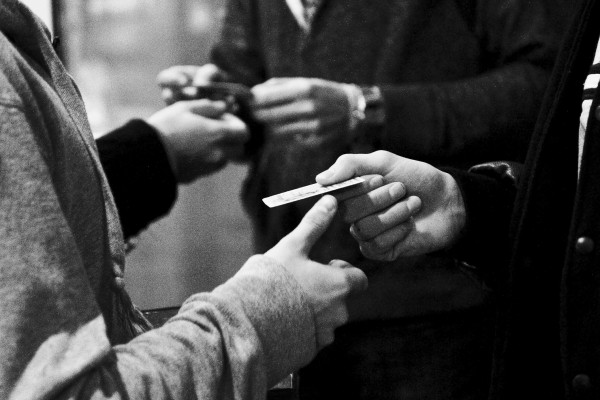 I walked to work, my head pounding. My job that night was “door-guy” and with my headache, I assumed sitting down and checking I.D.’s would be all I could handle. Being the only 20-year-old in a group of friends who are all 21 is like being in time-out during recess and watching my friends play kickball. That’s why I took this job: to stay out of trouble on weekends, socialize, and make money.

The weather was calm, but downtown Iowa City was not. On Washington Street, I passed the the ice cream shops, sandwich joints, and bars like Bo James (where my mother enjoyed burgers in the ‘80s) that satisfy 30,000 university students. I turned onto Clinton Street and saw the crowd outside of The Airliner (a bar that my grandfather remembers), and all I thought was, “Everyone go home! You’re all too tired to stay up until bar close.” Across Clinton, I saw the Pentacrest, devoid its usual backpackers. The Old Capitol looked alone but content, her golden dome shining brightly in the sky saying, “No, it’s fine. We’ll hang out another time. You kids go have fun.”

Customers who like to eat at the bar where I work are mostly alumni and families. At that point, they were still coherent and I enjoyed chatting with them as they waited. I talked with the mother of Peterson, party of four, who told me they were from Chicago and visiting their oldest daughter. I always get along best with the mothers that visit my bar because they remind me of my grandmother, a woman who really enjoys a fine drink (Often she will order top-shelf Patron and say to my grandfather, “I’m worth it”).

The crowd changed as those making fond memories over burgers trickled out, and others that didn’t want to remember the night stumbled in. I waved goodbye to the Petersons. The music switched from Steve Miller Band to Kanye and Jay-Z and I moved outside to guard the castle gate. I saw my buddy Chops manning the neighboring bar. Every passing alumnus asks Chops, “Is this Jake’s?” and Chops breaks their hearts, describing his bar which is much more upscale than the bar they once knew. My first night as door-guy, the manager said, “You’re gonna see funny shit. I’ve seen arrests; I’ve seen fights; and I’ve had people fall right in front of me.” He was trying to get me excited about checking I.D.’s for four hours.

At 10, the night was just starting. I saw a girl being taken home by a friend. She pushed herself away, yelling, “I don’t need help!” and bolted. Sandals slapping the ground, she proved she wasn’t too drunk to run, but POW. She hit the ground hard. She was fine. It was not at all funny… except that it was kind of funny.

I apologized as I checked I.D.s from every Midwestern state. “Sorry, but I have to check everyone.” The weather remained calm as the mercury sank. Bored, I asked Chops, “How cold do you think it’ll get tonight?” He guessed 58. I guessed 57. My Dad and I always played games like this when we were driving.

My head was still throbbing. Regulars asked who I was, some telling me they had worked here previously. I’d listen, smiling like Theodore from “Leave It to Beaver.” One woman wearing fashionable clothes came up hurriedly. Following her was a farmhand wearing a ripped t-shirt and dirt-stained shoes.

He asked her, “You wanna go here? What ‘bout Summit?”

He shrugged, “Well, can I buy your first drink?”

“Nope, thanks,” she said and hopped into the bar.

He struck out hard. To redeem himself to Chops and I, the rejected Romeo said, “I just walked her all the way from Brothers!” We acted like he’d had a chance as he continued, “Ya know, I can get any girl I want, but when I see one that I’m not sure about, I gotta try. God, she’s sexy.” He was right about that, and he hadn’t the slightest chance with her.

It was 1 a.m. and the night neared its end. Only the toughest of the tough and the drunkest of the drunk were still out, many heading home. Before closing, I saw the sad farmhand from earlier leaving with a younger woman who was less pleasing to the eye let’s say. My head felt better and I realized I’d wake up feeling great and all of our customers would wake up like I had that morning.

At 1:30 a.m., a co-worker instructed me to get people out and close down the bar. He introduced himself as Icebox. I rolled in the awning and brought in my chair. Icebox asked me if I knew what to do, but I didn’t. He was helpful, almost too helpful. He said, “You got this, buddy” and “Oh it just takes practice.” In a war movie, Icebox was the nice guy who died early.

I began to sweep but there were still some drunks in my way. The bartender, Jake, said, “Ben, get these guys out.” Icebox encouraged me, “Don’t let him push you around.” I politely asked the men to leave. Jake yelled, “Everybody out! Now!” One man tried to negotiate and Jake said, “Ben, please escort this man outside.” I did.

I swept the floor, put up the chairs, locked the patio, and cleaned up the bathrooms, while Icebox washed the bar. Jake handed me 18 bucks, probably about 10 percent of his tips, and I left my co-workers saying, “Nice working with you guys.” They said goodbye and Icebox patted my shoulder. Outside, I saw that the Old Capitol still glimmered. She was ready for Monday classes to begin, unlike the rest of us. Momentarily, I wondered where all of our customers would end up: A bed or floor? Whose? Maybe they’d overcome tiredness altogether. I surely wouldn’t.  Walking home, I sang “Bed is Too Small for My Tiredness” and turned onto Washington Street.

After working at a summer camp, Benjamin Lederer finds fart jokes and people falling down funnier than they actually are.