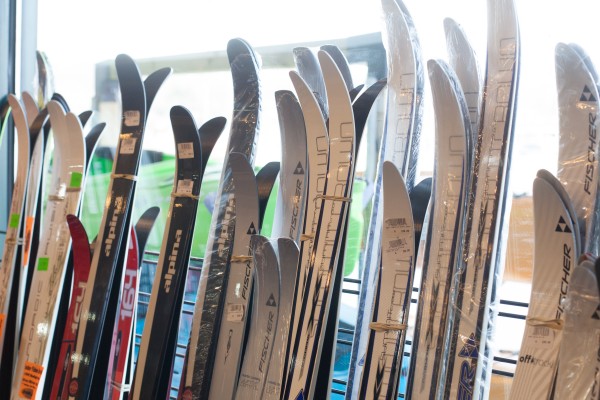 Iowa might not promote and advertise its recreational activities like other states (California comes to mind), but just because TV viewers aren’t bombarded with ads showing panoramic views of people snowboarding or fly fishing in the state, doesn’t mean that there aren’t things to do outdoors. From fishing on the Iowa River, to boating and beaching in Coralville, in Iowa City alone there are plenty of options for people who want to enjoy the outdoors. And, with 40 parks already, the Iowa City Parks and Recreation department is showing a further commitment to investing in recreation by funding $7.5 million in improvements at the Terry Trueblood Recreation Area.

Named in honor of the former parks and recreation department director Terry Trueblood who lost his battle with pancreatic cancer in 2009, the land near Sand Road in southeast Iowa City was purchased in 2006 by the city and the improvements are expected to be completed in early 2013. In addition to unanimous support from the city council, Vision Iowa, part of the Iowa Economic Development Authority, has provided a $2 million grant to help fund the project. Additionally, Fin & Feather is partnering up to offer more outdoor opportunities for all ages. 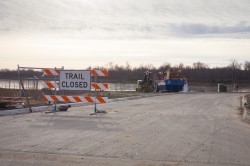 The land currently sports a fish-filled lake and a wide array of wildlife. “Everyone loves it. If you go down there any day of the week, there are people walking around, enjoying the area. They love the wildlife,” said Mike Moran, director of parks and recreation, of the recreation area. He says that an active turtle and beaver population draws people of all ages, along with pelicans and stocked trout in the lake.

Improvements to the park came out of a desire to enhance recreational offerings in all parts of the city.  “We were in a deficit for parkland area in the southern area of Iowa City. This was a perfect opportunity to develop a park.”

With help from Snyder & Associates, based in Cedar Rapids, the 200+ acre area will become Iowa City’s largest park and an even more ideal destination for families, fishermen and lovers of the outdoors. Improvements for the recreation area include a newly constructed lodge that will hold up to 150 people, ideal for conferences, wedding receptions, parties and gatherings. The project also includes a paved, 8-foot wide sidewalk that wraps two miles around the lake. Throughout the trail, lookouts will be installed for those wanting to take in the scenery.

“This will be a total destination park where people will go and have the opportunity to stay for the whole or half day,” Moran said. Kayaking, canoes, snowshoeing, fishing and ice skating are just a few of the activities people will get to enjoy at the new-and-improved recreation area. Fin & Feather will be operating the marina building, where many of the rentals will be available. “We worked with the city on it, we applied for the spot,” Brian Mildenstein, manager Fin & Feather, said about the partnership. “We’ve been a partner with the city on other things in the past. As a local business and as a retailer of things like canoes and kayaks, I think it was a natural partnership.”

In the winter months, the sidewalk trail will allow for snowshoeing, and ice skates will be available to rent for use on  the frozen pond. Fin & Feather 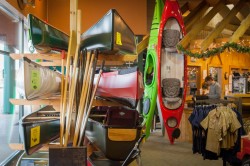 According to Mildenstein, there are endless possibilities with the improvements, Mildenstein said. “We really would like to work with, in particular, elementary school physical education teachers.” He continues, “We want to encourage the local movement to engage in physical activity that you can continue throughout your life.”

Mildenstein and Moran both see Iowa City’s dedication to growing its parks and recreation opportunities as an effort by the city to better the lives of citizens and visitors. “I think it’s a quality of life thing for Iowa City – more and more bike lanes, awareness signs for bike commuters – the ability to make the river more of a feature of Iowa City as opposed to something you have to get across by beautifying both sides of the river,” Mildenstein said. “For us, that continues further down Gilbert to Sand Lake and that’s another place with more opportunities.”

Erin Tiesman is a local freelance writer and comedy blogger who loves a good joke and a laugh. You can see what’s up in Iowa’s comedy scene at her blog, iacornfedcomedy.com.