On Saturday, Jan. 26th, the route for the Register’s Annual Great Bike Ride Across Iowa (RAGBRAI) was announced in Des Moines. The ride is the 41st of its kind, beginning July 21 in Council Bluffs and concluding on July 27 in Fort Madison. Overnight stops along the way will include Harlan, Perry, Des Moines, Knoxville, Oskaloosa and Fairfield.

The organizers went easy on the participants this year with the second shortest route in history, at 406.6 miles. It will not feature a single “century” day, with the longest route falling far short of that 100-mile mark–83 miles, from Harlan to Perry. The ride will include four consecutive days of 52 miles or less.

The route is also the 15th-flattest in RAGBRAI history. Despite the relative ease of this year’s ride, the enthusiasm of the riders will not be tempered, with an estimate of over 10,000 participants ready to make the trek this year. Whether you’re involved with an established team or you’re flying solo and self contained, RAGBRAI promises to deliver its unique brand of community spirit which has made it possible for riders to keep coming back for over forty years.

Michael Chamberlain, owner of The Broken Spoke, says he’s been on RAGBRAI six or seven times, all self-contained. “As long as the heat stays relatively subdued,” he says, “it should be easy and enjoyable!” 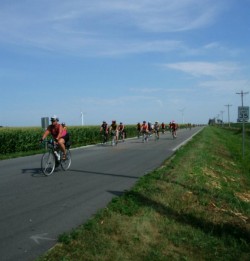 He says a highlight of the route is that it goes through Des Moines, “because that means a day can be spent at Adventureland!”

For first time riders, Chamberlain says the most important thing you can do is log lots of hours on your bicycle seat before heading out. “Saddle time is what makes or breaks an enjoyable RAGBRAI,” he says. “If you aren’t trained for riding 60ish miles per day, it will take away much enjoyment from the actual ride.” Aside from that, he says tackling any nearby hills and riding into headwinds as often as you can will also serve you well.

Ryan Baker, owner of World of Bikes, advises would-be riders to “Start now,” and “ride regardless of conditions.” He warns that “once you’re on the route, there aren’t many couches to sit on to ‘wait it out.’”

Chamberlin encourages riders to consider making the trip self-contained. “Riding self-contained is great because you are always on your own schedule!” When packing bags, he says “Carry less than you think you need as far as clothing and food goes. There are laundromats and grocery stores a plenty all across Iowa!”

Baker adds that riders should do a few test rides with their bikes loaded up. “Make sure you have the right gear for the week, but make sure not to over pack. 406 miles is even longer on a heavy bike.”

Additional information and updates are available at www.ragbrai.com