Learning to do archery is more than learning a skill. Learning to do archery affects how you see yourself and your body. I was fortunate enough when I was young to have received a bow-and-arrow set from my parents for a birthday. They must have noticed my mimicking the motions and speaking the British accent of a certain wily animal (the outlaw fox in Disney’s Robin Hood, still my favorite Disney film) and, bless them, they gave my scrawny arms something to hold.

The straight-limb fiberglass bow I was given is the most inexpensive kind, but no kid similarly situated would put such facts before adventure. The joy was in the fact that I simply had a bow. To this day, I remember pulling the almost too-white string, which of course became grey where I pulled most; the bold red limbs more than half my body length; sporting a make-shift cardboard quiver to hold all of three arrows; pinning balloons to the backyard ground and shooting at them from our ten-foot high tree-house (to me, a fraction of Sherwood Forest).

In those days without the Internet, my body and the paraphernalia that it could touch and pull and drag along were how I connected with the world around me; they were, literally, my first “Internet”—that which interrelated me with my environment and entwined me in spaces of felt-participation, both human and non-human. Without a computer, I had to learn the proper shooting form not only by emulating cartoons and movies, but more importantly, by pulling and releasing those arrows a thousand times; by going down that tree-house, retrieving the three arrows (sometimes, frightfully, from the neighbors’ backyard), returning to my starting position and making those tiny but necessary adjustments in my elbows, my hips, my fingers, my mind. Through all of these seeming mistakes, something fundamental happens: One is not just improving, but getting rid of the concept of “mistake” altogether. You realize that missing and hitting the mark are just two sides of the same ontological coin, just as the word “mother” cannot be defined without the word “child.” They are not antitheses, but more like parentheses of each other.

A craft like archery can make a deceptively simple display of repetitive steps turn out to be a kind of quiet dance. As Tagore put it, “not hammer strokes, but the dance of the water, sings the pebbles into perfection.” 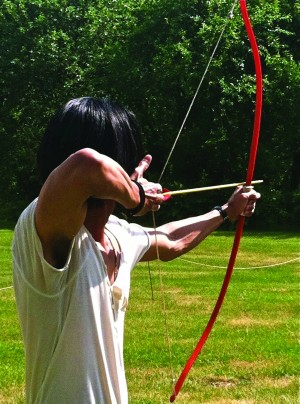 But I have strayed somewhat into the forest of subjectivity. The valley of fact should be traversed as well. As suggested above, the quality of equipment, or “tackle,” is important to your success in archery. Like in many sports, high-quality equipment is expensive. But one of the advantages of finding the proper equipment for your skill-level is not only that you will maximize your current state of practice, but you will also become attuned to an archery apparatus that is just yours, such that each part is as close an extension of yourself as it can get. As in music, one does not need several violins to play several pieces of music. For example, a recurve bow is perhaps the most popular bow for general and long-term use. Unlike the beginner’s straight-limb bow, a recurve bow provides greater leverage, or cast, when the string is pulled, reducing the strength needed to pull (also called draw-weight) and increasing the speed, smoothness and precision of shots. Moreover, the shelf (or groove in which the arrow rests above the bow’s handle) is better indented and centered than that of a straight-limb bow, whose arrows must sit to the right or left of center. Finally, there is the compound bow which is often used for hunting and the high-level competitions. As described in Archery: Steps to Success by Kathleen Haywood and Catherine Lewis, this bow is characterized by an off-center, or eccentric, pulley or cam mounted on each limb tip and encircled by a long, crisscrossing string. Built to harness the powerful elegance of physics, this bow allows for the energy required to rotate the part of the pulley with the long radius to be greater than the energy required to rotate the part with the short radius. The pulleys are mounted so that the energy required to pull back the bowstring is the greatest at mid draw and the smallest at full draw when the archer is holding to aim. When the archer releases the bowstring, this situation is reversed, and the energy applied to the arrow is increased. Essentially, it gets easier to pull the string the farther you draw, and yet an inverse amount of power is given the arrow upon release.

One of the aspects of archery that I embrace most is that it does not care if you are male or female. Although the practice of archery has historically been dominated and militarized by men, the reality is that archery lends itself to gender equality. It can also be enjoyed by people with disabilities. For example, Im Dong-Hyun, a South Korean archer, is a world-record holder and Olympic gold medalist—and he is legally blind. In this sense, archery as a whole art form is also “blind” to its would-be artists, for human qualities like concentration, self-awareness, awareness of one’s surroundings and patience are just that—human qualities, not exclusively male or female ones. With the availability of compound bows, which contain supportive apparatuses like release aids, bowsights and stabilizers, people of all levels of physicality can take up archery and take it up well.

The more I reflect on archery, the more I realize that it is an art form (I hesitate to only call it a “sport”) reconciling many paradoxes, and perhaps this quality is crucial to its obscure popularity (a paradox itself). To wit, the challenge of hitting the mark or any goal is a timeless one; the various forms of doing that are not just part of the human condition, they are exactly the human condition. And yet, to “hit” your mark means to miss it many more times. And so, learning to persevere after one has “erred” is just as essential to archery, if not more so. At its best, archery distills a space in which you can truly dwell in the fierce urgency of now, when all time and circumstance must reverse-telescope unto you and all your history of thought and training must surrender themselves to the grace of a breath. In its manifold simplicity, you realize that, as an archer, the first and last thing at which you aim is yourself.

Jomil Ebro is a PhD student in English at The University of Iowa. Although he doesn’t always carry a bow, you may find a feather in his hat.