The English would like you to remember, remember the 5th of November because of some Guy who tried to blow up Parliament. Why anyone would have such a beef with George Clinton is beyond me, but Iowa City’s Mill Restaurant would like you remember Saturday, November 5, 2011 for the great rock show they hosted. The bill was full of Iowan bands; MichaelSarah and Derek Lambert & the Prairie Fires opened for the Grand Tetons’ album release.

Michael Scheib and Sarah Mannix make up the duo, MichaelSarah. Their sound is raucous and rowdy, as if Meg White and Kurt Vile teamed up to play Black Keys jams. Michael’s guitar has a wild, sturdy tone as he overdrives it through a fuzz pedal, and Sarah plays the drums with fury. MichaelSarah have a roadhouse stomp and a sexy swagger that makes for a powerful show.

Derek Lambert & the Prairie Fires are a group out of Ames, Iowa; they are part of the Maximum Ames collective along with Mumford’s and Christopher the Conquered. Their sound comes from the darker side of country, but with the bad influence of punk mixed in, as if the Dead Kennedys and Johnny Cash recorded a garage tape together. Derek Lambert leads the group and sings with grim intensity. The band backs him up with lots of energy, and with a tight rhythm held down by Chris Ford. Derek Lambert & the Prairie Fires’ sound has twang and attitude, like Murder by Death or the Old 97’s, and their outlaw side shone clearly on the Prairie Fires’ boozy rendition of “Swing Low, Sweet Chariot”.

Iowa City’s Grand Tetons released their new album, They Do Move in Herds, on digital download as well as cassette tape. The decision to release on tape may have been for various reasons: possibly for economy (tape is much cheaper than a vinyl pressing), or just to do something different. However, I feel that it meshes well with the overall aesthetic of the band; the Grand Tetons’ sound is a throwback to the past glory days of rock, country, and folk.

Brian Johansen leads the five piece group with gravel in his voice and a guitar in his hands. Brian can sound like Jacob Jones, Steve Earle, or Bruce Springsteen; his voice and lyrics sound like he’s been survived hard times and broken hearts, with a full allotment of scars to tell the tales. In “Ton of Feathers”, the second song on the new album, Brian borrows the cadence from Tallest Man on Earth’s “Steal Tomorrow”, and name checks the Swede in the second verse. In counterpoint to Brian’s maudlin, whiskey-addled voice, Ellie Black’s fiddle caroms through the tunes like a whirling dervish. She can play sweet and low, as in “Cottonmouth”, a sad duet with Brian on the subject of temptation. However, she can also saw the strings with the fervor of a banshee; as she does in “Split the Sea”. This is a drinking song in the best Shane MacGowan tradition: both sacred and sacrilegious, as Brian growls: “Moses, just give me the staff.” The Grand Tetons’ songs are about lost love, lost luck, and barely treading water, and their debut album They Do Move in Herds is a sweet collection of sour tales. 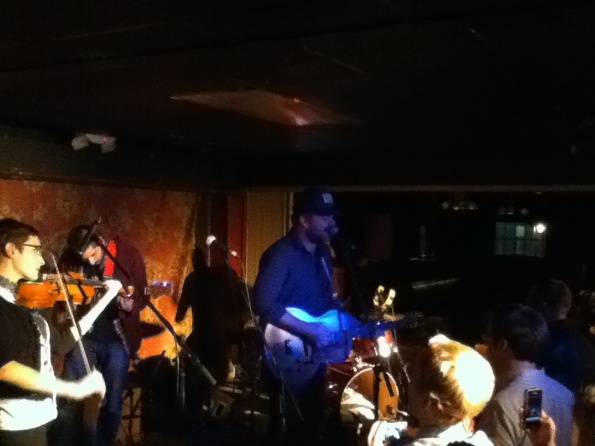