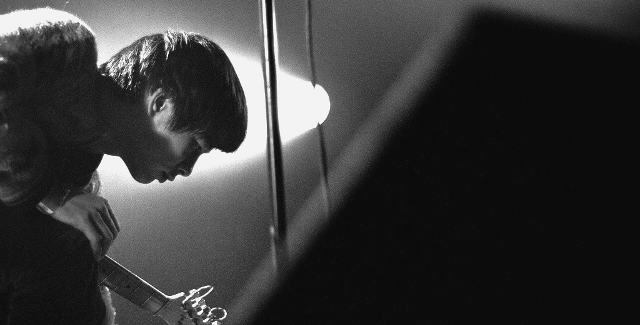 Experimental/art-rock guitarist Dustin Wong is set to perform in Iowa City this Friday at the Trumpet Blossom Cafe. Originally making a name for himself as a member of indie rock groups Ecstatic Sunshine and Ponytail, Wong has since taken time to expand his craft through a solo career. With two major releases in the last year, 2012’s Dreams Say, View, Create, Shadow Leads and this year’s Mediation of Ecstatic Energy, Wong is proving there is certainly no shortage to his creativity, as the latter release built upon an already noteworthy amount of experimentation, the likes of which have scarcely been heard on record before.

Thirty seconds into any of Wong’s solo tracks, you will likely be questioning how many musicians make up Wong’s band. Yet, however improbable, Wong manages to perform and record all by his lonesome, with only a few pedals and loop machines to accompany his guitar. Given the facts, it is pretty incredible; a true testament to pushing the boundaries of musical performance and experimentation.

One word that comes up a lot for solo performers is atmosphere. This is no different for Wong, who manages to create a characteristic and unmistakably heavy atmosphere on both of his solo releases. Opening with dark layers of jolting tones and entering overtop with several unique chord progressions, time signatures and loops, Wong manages to craft a darkening mood which takes effect almost immediately. If one were to guess, that atmosphere must certainly be magnified in a live format, with Wong bringing his own persona to the stage while having to perform these intricate and detailed arrangements before an audience. Fans of musicians working to expand the possibilities of common instrumentation and recording will likely not want to miss this show.

Wong will play an opening set before being joined by Takako Minekawa for a collaborative performance. For more information, check out the Trumpet Blossom’s event page.