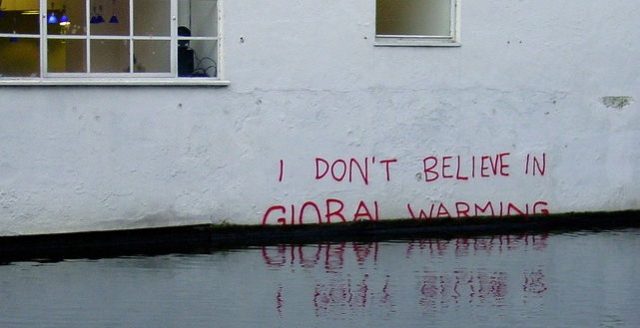 Mississippi Sen. Roger Wicker (R – Buried Tire Fire) just wants to know why, in this mean old world, we can’t all get along. Perhaps tired of only coming up in internet searches as “the other guy who got Ricin letters from that one nutcase,” Wicker spoke up the other day for the plight of climate change deniers:

“At the very least, I think it’s time for some tolerance in the public discourse regarding the many scientific viewpoints on climate change. Respect should be shown to those who have done the research and come to a different conclusion,” Wicker said during a Senate Environment and Public Works Committee hearing on climate science.

Wicker then called on President Obama to appoint Jenny McCarthy as Surgeon General.

You have to feel sorry for climate change deniers… no, actually, you don’t. Despite not having any actual science to their credit, they’ve managed to get an entire national political party in their pocket, with a television network and a slew of bloggers to advance their claim that global warming is nothing more than a totalitarian plot advanced by a cabal of scientists getting drunk off grant money. And yet the poor dears still don’t get the respect they think they deserve. In fact, as Dana Rohrabacher whined recently, the so-called “science community” is trying to persecute them with the use of the term “deniers,” which implies that climate change is some kind of “fact” or something. Where, these brave souls ask, is the tolerance for people who merely believe different things? After all, as the Stupidest Man On The Internet points out, it still snows sometimes.

Meanwhile, elsewhere in the GOP, tolerance continues to be a dirty word, as RNC chair Reince Priebus — who continues to deny that his name is taken from a character in a Doctor Who fan fiction — reassured evangelicals that the Republican party is definitely not going to dabble in any of that tolerance stuff when it comes to teh ghey. In an online interview, the Christian Broadcast Network’s David Brody worried that the party’s half-hearted mutterings about trying to attract voters by maybe not being quite so medieval might mean that the GOP is saying “we have to be more tolerant.” Priebus nipped that nonsense in the bud:

“I don’t know if I’ve used the word ‘tolerance,’ I don’t really care for that word myself. I don’t have a problem with it, I just think it has another meaning politically that can go the other direction,” Priebus said.

So when it comes to crazy pseudoscience, Republicans want tolerance. If it’s for gay human beings, no, don’t worry, there’s still a zero tolerance policy.

[The Hill via Maddow Blog / Salon]