Sandbox is a corner of the web dedicated to Iowa City writers and artists working to engage the public in an interactive environment. Find out more here. 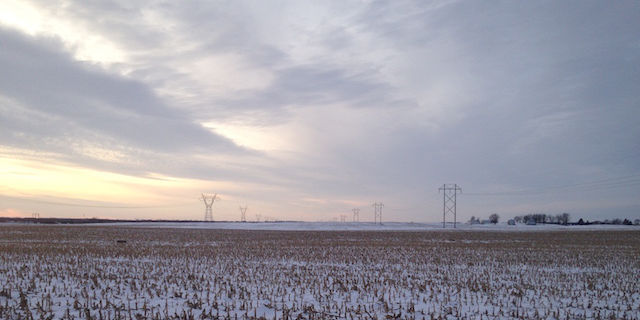 Farm records allow you to measure how efficiently you are using resources and to determine whether or not you are making any money. They help you define and evaluate success as measured by income generated for family living, retirement, and other needs and desires. Financial success is measured by profitability; if the farm business is not profitable it is not sustainable. Farm records are also essential for planning and decision making.

I want to tell the story of a man named Wayne, who stands about five and a half feet tall and weighs one-hundred and fifty pounds. He is nearly seventy years old and has a wife to whom he’s been married for many years. He has several grandchildren. His farm sits back and down a bit from the main road into my hometown and consists of a few hundred acres of corn and beans, a shop with a tin roof and thin windows, a few old hog sheds, and the brown relics of cylindrical corn cribs resting in the pasture behind. He has a kind, eager, leathered face. His arms are shaped like bowling pins, covered in a tangle of course hair: dark grey or light grey or light black that gleams with a sheen of dust and oil flecks. Beneath this hair, above the heavy tendoned arms, are a patchwork of moles and freckles and scuffs and burns scarred into his epidermal DNA by years of sun and sweat and wind.

But his hands — his hands seem from another century, enduring through the decades and all their innovations by merit of their utility and sheer weight. His fingers are knobbed trunks extending from padded, callous palms, so large they have little room to spread apart, but are nimble enough to find the smallest bolt (say, one-sixteenth of an inch), guide it through some hole hidden in the belly of some gangly machine, and feel its length intuitively through the threaded post to the end where the little nut need go. He spins, the head of the bolt and the nut, holding both delicately with the very tip of his middle finger and thumb, in tandem, without looking, taking no longer than the length of a deep sigh to snug it all up to satisfaction.

There, the god-damned thing, Wayne says in the memory I choose of him. His blue eyes dart from his hands to the ground and he stands from the kneel he’s taken beside the hub-like air compressor, or planter box, or little auger motor caked with so much grime it feels velveteen — whatever it is he’s working on in my mind. His knee pops as he rises: the sound of a rock dropped on top of rock. Ah, hell, he says, shakes his head, hobbles. Then, in one breath: Damn knees have never been good. They’ve been doing this popping shit since… and he’s off, lost and wandering, deep into story.

I write about Wayne without his knowledge. My moral qualms are soothed, however, by the need I feel to tell his story, which I believe serves to stand in for an important type of person: he cusses and works and wears oil-stained jeans (all he owns) and has only heard of Siri from some report on News Talk 1540AM: WMT a few springs ago, maybe, while he was changing the blades on a disk gang in his dirt-floored shop. I am not being quaint. This is Wayne, one of few farmers whose religion is remains pragmatic: in his theology, the divine acts directly on the day-to-day through the weather and the health of those around him and luck. Changes in any one of these three categories indicate a holy intervention — not the kind with shimmering light and trumpets, but an impartial force existing just out of consciousness.

When I think about the farm as I had known it growing up — the conventional, conservative, traditional kind — I find myself playing a reel of stories such as this in my mind, stories that I’d heard (and continue to hear) told countless times at Christmas and over whisky at the kitchen table and while standing in the cool shade of my father’s cluttered shop as daylight slipped away behind the corn to the west. Dad would tell his listener about the skunk that got into the well in ‘98 and the chemicals that would’ve worked to neutralize the stink, and about how the first time he used the 4650 he ran it into a gully and snapped off the front axle (God DAMN was I pissed off), and about the time Wayne helped bale hay but refused to eat until they’d picked up all the straw in the pasture. Afterward, there was a supper: the wives had gotten together and roasted chickens and cooked mashed potatoes and casserole, set out a few folding tables on the east side of the house. Wayne ate two whole chickens and then wanted ice cream. When Dad tells that story, he laughs and laughs and invariably concludes it with a conclusion that serves as moral: that guy’s the hardest working son of a bitch I know.

Why the story? There’s a logic to it: work ethic (valued highest among all other traits) is almost directly correlated with appetite. I have heard this formula repeated, implicitly, many times in many stories: the stories of post-harvest meals above checkered table cloths and the mid-morning coffee and donuts during shelling season. This formula doesn’t fade with time; it’s still applied by farmers and their children, at least the ones I’ve known. Now, when I go home and share a meal with my family, taking a break from the desk work to which I’ve grown too accustomed, I’m always told (told) to get seconds. I don’t need the calories, but in the story-sphere of farmland, that second helping of potatoes is no different than saying work hard on those essays, Nick. I usually try to oblige.

But, like all stories, these stories are told to preserve memory: in Wayne’s case, to memorialize someone integral to the life and persistence of my family’s identity. When my grandfather got his right hand caught in the corn picker, ripping open his hand from the first knuckle on his index finger to the back knuckle of his pinky, Wayne and his family drove their tractor and bucket through the cold dark of the early winter mornings to shovel the snowy lane and jump my grandmother’s car. When my grandfather passed away, his half a thumb — which served as testament to both the accident and the help he received — was buried along with his perspective on the story. Still, my father tells the story and adopts my grandfather’s perspective. When he tells it, the “they”s become “we”s and the “had”s become “have”s. Dad does this to preserve some sort of identity. He must. We are, after all, the way we are because of the stories we tell.

Here’s another example: Once, Wayne got to telling a story (Oh, where were we standing, Dad wonders. Oh, heck, it was right under that security lamp by the old machine shed. Yeah, we were loading corn — Wayne and me and who else… Kevin? Hell, I don’t know, but we were standing in a circle…”) and got so worked up that he fell over backward, but was too invested in his telling to notice it, so he stayed sprawled on the cool gravel until he finished. The red chaff from the corn would’ve been snowing down from the auger spout above them, swirling in the glare of the grain truck’s work lights idling loudly amid the laughter of all those present.

They were standing at the corner of the machine shed.

I want to conclude with that machine shed: a large square building with a simple two-sided roof and a cracked foundation and buckling walls, white paint that has been chipped away to reveal the red below (that had once chipped away to reveal the lumber weathered to almost no color). Inside is a menagerie of knick-knacks: wire, fencing, old tires and posts, a rusted cultimulcher buried under warped 1x4s stacked as well as they can be. Dad used to store hog feed in the southeast corner. I’d help him guide the feed mill auger through the doorway as he backed the tractor across the yard. On the outside, on all sides but the south, there is a four inch iron ring bolted to the wall where horses would’ve been tied in the summertime. You’d move the horse around the barn to follow the shade as the sun made its heavenly movement above.

The rings remain, but just last week — in the night wind that followed from the hard, hard cold and snow — the wind tore the roof at the northwest eave and peeled back toward the peak, scattering nails and rotting, frozen shingles all across the snow, as if some great being had wanted to see what was inside before deciding it wasn’t worth the effort. When I asked my dad what he wanted to do with the barn, he said it’d probably be torn down this spring — either that, or jack up the whole building so that we can pour a new foundation. Square the floor, shore up the walls. But to what end?