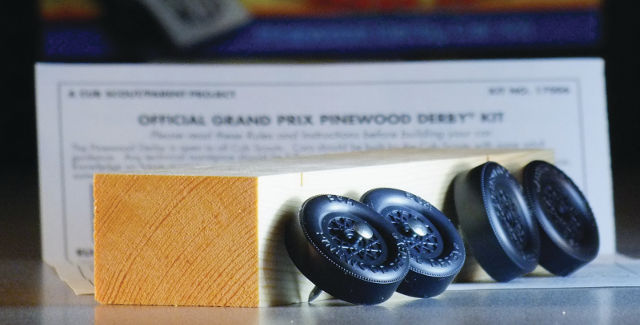 What do you call an empty beer can with racing stripes, a couple automotive decals, miniature wheels and your favorite number on the side? A canwood derby racer.

Red’s Alehouse in North Liberty is hosting the first annual Tallgrass Gran Prix Canwood Derby, an adult-oriented, beer-themed version of the Boy Scouts’ pinewood derby, on Saturday, May 24 at 1 p.m.

Co-sponsored by Red’s, Tallgrass Brewing Company and John’s Grocery, the Canwood Derby will not only feature races for traditional pinewood cars, but also races for “canwood” cars made out of empty beer cans. Brandon Ryan, the service manager at Red’s, said awards will be given for individual race winners, best designed car and best in show. The grand prize is a private, eight-course beer dinner for the winner and seven friends at Red’s Alehouse.

Ryan said all proceeds will benefit the Hawkeye Area Council Boys Scouts of America. The Electric Koolaid Trio will perform on the patio starting at 2 p.m.

In a pinewood derby, miniature cars made of a single block of pinewood are placed at the top of a ramp. Powered only by gravity and their own momentum, they race down a long, straight track.

Registration starts at 11 a.m. at Red’s and costs $15. Entrants must be 21 years old and older. Pinewood derby car kits are on sale for $5 at John’s Grocery in Iowa City and Red’s Alehouse in North Liberty. Vintage pinewood derby cars of five ounces or less are also welcome in the derby.