With deft and lyrical prose, Rae Meadows weaves a tale of love, hope and survival in her recent novel, I Will Send Rain (Henry Holt & Co.), published Aug. 9. Meadows will read from the book Wednesday, Sept. 7 at Prairie Lights, alongside Dean Bakopoulos, author of Summerlong (Ecco 2015). 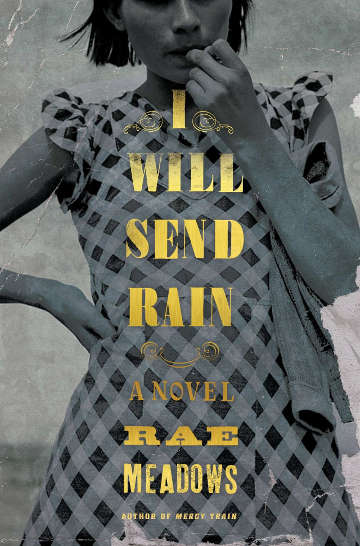 The time is the 1930s; the place, the Oklahoma panhandle. Annie Bell, her husband Samuel and their two children make a living farming outside the small town of Mulehead. After two years of drought, resources are growing thin, and the effort to make ends meet strains the bonds of family and community alike. The Bells’ young son Fred cannot speak, their daughter Birdie is a rebellious teen, and Samuel constantly dreams of rain. Taxed by her attempts to hold them together, Annie finds herself haunted by the choices she has made in her past, and questioning whether it is still possible to make different choices in her future.

When the first storms of the Dust Bowl begin to roll in, the community is caught unprepared for the new and terrible reality. As conditions worsen, families begin to abandon their farms, hoping that life might be better somewhere else. Annie and Samuel refuse to leave their home, stubbornly holding to the kernels of what they have rather than the uncertainty of the unknown. But their situation only deteriorates, and they have no idea what is in store for them.

Though told through the differing perspectives of many characters, the book never loses its focus, remaining a story that is, at its heart, about human interactions, human dreams and the inherent resilience of the human spirit. The characters are more than believable; they are people the reader recognizes, both in their strengths and in their weaknesses. Annie’s unyielding control is a source of support to her family, but also keeps her from communicating her distress and asking for help. Samuel’s persistent faith alienates others and keeps him from reaching out to those he loves. Birdie longs for a life beyond the one she knows, but her own actions jeopardize that future. Other characters display the same complexity, and it is clear that even the most minor have their own struggles and triumphs.

Meadows has done her historical homework as well. Her descriptions of the constant dust rollers show not simply an overall sense of terror and despair, but a vivid understanding of the more insidious effects that wear down the townspeople, eventually becoming a draining part of normal life. Each small detail draws the larger picture of a changing time which has seen a radical alteration in traditional farming techniques. Her portrayal of cultural attitudes never interferes with the basic humanity of the characters, nor the sense that this story is as timely now as the era in which it is set.

All this is wrapped up in lovely, evocative and powerful prose, making I Will Send Rain a book that will captivate you, and remain with you long after you have closed the cover.