Mark NeuCollins collected these thoughts at a debate watch party at the International Brotherhood of Electrical Workers, Local Union 405 Hall in Cedar Rapids.

Newt Gingrich got something started in the early 90’s and now they’ve perfected it—it’s called hate politics and they are doing a real good job of it. And they know what they are doing. They know exactly what they are doing. My wife will not get involved in politics because she thinks they are all crooks. She wouldn’t come out tonight. And I’m not too far away from that.

I really do believe that Mr Romney will simply peddle as he has been, and not give out much substance. I don’t expect to hear too much from him. I think that he has tried to misstate as many of the comments as he can, to mislead general voters, folks who are not as well-tuned to campaigns. If he can misstate and misdirect, then indeed I think that is what the plan is. 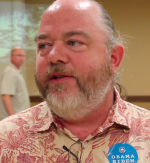 Yes, I am my brother’s keeper. I like that idea. When it comes to that saying “a rising tide will lift all boats,” no, it will only lift the seaworthy boats. The boat that already has a hole in it is not going to rise no matter how high that tide goes. I tend to be more Democrat than Republican because, let’s help fix these people’s boats so that they can float, so that when the tide goes up they can get something out of it, not floundering on the bottom getting worse. 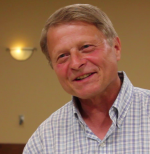 I am 62 and the Republican party I grew up with, well we disagreed, but we’d sit down at the table, argue a little bit, get a compromise going, and pass important legislation. It can’t be done with this radical right group. It is not in them. We know [Romney’s] record of saying one thing one day and another thing the next day. Tonight his sudden switch to the middle is hypocrisy on his part. It has been hypocrisy from the beginning. Do I trust him? Absolutely not.