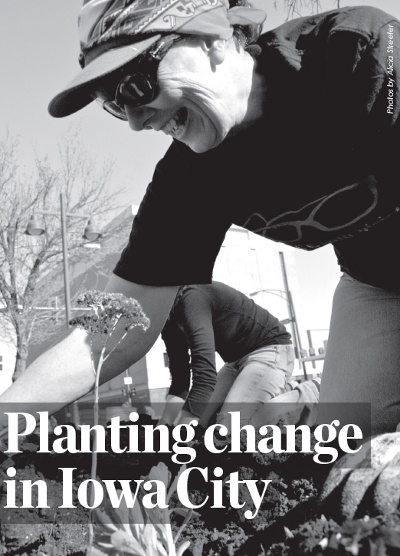 “You’ve GOT to be kidding me,” I mutter in disbelief as I watch a wandering adolescent drop an empty Doritos bag on top of a newly planted tulip.

“Seriously?” I yell at his back. He turns around, confused. I look down at the bag then back up at a pimply face. He can’t be more than 13. “Seriously.”

I don’t have to explain. He’s been watching me pick cigarette butts and plastic wrappers out of the pedestrian mall planters for about half an hour now. “Oh sorry,” he says, now flustered, “I didn’t know you saw that.”

Somehow I feel pretty sure that yelling at children was not part of my mission today. I slouch ashamedly back to Linda Schreiber, the director of my labor this afternoon. Unsurprisingly, she has managed to find more productive uses of her time than littering showdowns.

Linda cradles a transplanted hosta with one hand, sweeping in dirt to cover the roots with the other. She’s been landscaping the downtown for three years now. She’s planted, cleaned and organized the planters and forgotten areas in the pedestrian mall and surrounding areas.

Yet for all that work, she hasn’t charged anybody a dime. She doesn’t work for the city or a private landscaper. She’s not even volunteering for some sort of environmental group. She’s just Linda. And she likes to garden.

Back in 2008, Linda noticed that downtown landscaping was starting to wane. She had unsuccessfully sought permission to plant downtown once before, but she went back for a second appeal. This time city officials agreed, though Linda reports that they did have one unexpected concern:

The city had tried to plant in high-traffic areas downtown, like the ped mall. But one way or another, their work often got trampled.

“They had plans,” says Linda, “but over time the focus downtown became less horticultural and more custodial.”

Linda wanted to change that. “Well,” she replied to Helling on that day in 2008, “We’ll just keep trying and see if downtown is ready for this experiment.”

With approval from the city, Linda started planting hostas and other hearty plants from her own garden with the help of a few friends. Her initial work on Washington Street was an immediate success. She wound up putting in 400 plants the first year.

The next year she stepped it up, getting volunteers from Hope House and expanding onto Clinton and Gilbert streets. They kicked off the season planting more than 500 plants in two days. Now, three years after she started, Linda estimates she’s responsible for more than 2,000 plants in the downtown area.

It hasn’t all gone perfectly. Though the majority of her efforts have been successful, a few places have been trampled. “In one location we had to replant four times,” Linda said.

This might be discouraging to some people—like me for instance. When Linda invited me to join her for an afternoon of planting and cleaning on the ped mall, I was optimistic. But after a few hours I was feeling pretty indignant, as evidenced by my close encounter with the Dorito-dropping 13-year-old. Why am I sitting here like a chump cleaning up garbage, when nobody else seems to care? This is not my job, I want to tell the passersby. Shouldn’t somebody else be doing this?

Linda doesn’t think this way. “Iowa City has a great downtown and we all need to protect it,” she said. Instead of sitting around hoping someone else would do the protecting, she made it happen herself.

“I just did it,” she said. “I said, ‘I think this is doable.’ If others see the change, they’ll begin to take more pride in this place too. I wanted everyone to own downtown.”

So far it seems she was on the right track. People have started to take notice of what Linda is doing and jumped on board. Local landscapers like Quality Care started donating plants, while downtown businesses like Soap Opera and Revival donated money for the cause. This year, students in a West High environmental club want to “adopt” Linda and her project. The City, the Downtown Association, the Chamber of Commerce and the University of Iowa have all endorsed the project. City officials even provide support with volunteer coordination for some bigger planting days.

Others help in more subtle ways. “A lot of people thank me,” Linda said. A few jump in to help. On a recent planting day, a random passerby stopped to plant for a while.

Linda plans to keep her project going, and encourages others to follow her lead. “You could do the same thing I’m doing,” Linda said of her enterprising community improvement project. There is a lot of potential for significant changes in the downtown, she says, if people take the initiative.

The effects of Linda’s efforts are becoming more and more obvious as plants sprout each spring. Looking around at her work, I can see why she keeps going. She’s made the downtown a more beautiful, lively place. And perhaps most impressive, she’s done it all without assaulting any litter-happy pre-teens.