“Some of us older people have problems with our knees, so we don’t want to jog, and racquetball is out,” Hinds said. It works the whole upper body and even the legs if the paddling is done correctly.

Hinds would recommend the sport to anyone of any age, whether it’s for exercise or relaxation. Entry-level kayaking is easy to pick up. He has even taken a blind student out to Lake McBride.

“He wasn’t just legally blind,” he said, “this guy can’t see anything. And we went all over.” 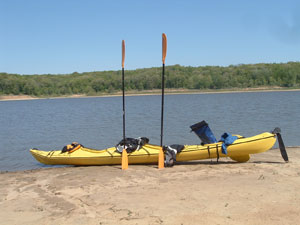 Mary Mathew Wilson, an Iowa City resident in her mid-50s, has never kayaked. She intends to buy one anyway. She is getting into the sport to be in better physical condition, have more upper arm strength and for stress management.

It’s a healthy sort of mid-life crisis, if even a crisis at all.

Unlike Mathew Wilson, Hinds started kayaking when he was much younger. He and a few friends took a trip to Wisconsin where they took a class on whitewater kayaking. From there he expanded to flat-water kayaking.

“Your sense of adventure changes as you get older,” he said. Now he sticks to sea kayaking because he no longer has the desire to do whitewater.

Canoeing is how both Mathew Wilson and Hinds started on the water.

“I love the water,” Mathew Wilson said, “but it’s hard to round up a group.” She used to live in Columbia, Mo., where she would go canoeing frequently with friends and hopes to take her kayak back down there some time.

Compared to a canoe, kayaks have a much lower profile that keeps them from being as influenced by the wind. Their top will keep the rain out.

“They’re like little water bugs or something,” Hinds said. He believes that these advantages in the elements make a kayak more useful than a canoe.

Three main types of kayaks exist on the market today. Recreational kayaks, which run roughly nine to 14 feet, have a larger cockpit, making them easy to get in and out of. Sea kayaks are generally 16 feet or longer. Finally, whitewater kayaks are made of heavier material in order to withstand collisions.

Hinds recommends sea kayaks for beginners because of their maneuverability and stability on the water. They work well on many of the smaller lakes in Iowa that are too small and shallow for things like jet skis or motorized boats.

Both these and the recreational kayaks come in materials like Kevlar, making them easy to transport.

“It’s going to have to be really lightweight, so I can manage it,” Mathew Wilson said, “at least until I build my upper body strength.”

“Don’t just go out and buy the pretty red one,” Hinds said. Each boat has a different feel. Seats vary. Stability varies. He recommends that people try several different boats, and talk to other people who have already bought, before they lay down their money.

Many outdoor stores, such as Fin and Feather, will let people test kayaks before they buy them. There are also rental centers, such as Touch the Earth, with a variety of kayaks available to test.

On the low-end, kayaks are several hundred dollars up front. Then add in the cost of a paddle and a life jacket. The lighter weight materials are also more expensive than heavy plastics.

“It’s no more expensive than joining a gym,” Mathew Wilson said. She believes that working people can build it into their budget.

“Older people have an extra dollar or two,” Hinds said, “so they can go where students can’t go.”

This also translates to spending the night in a hotel instead of on the ground, in a tent, on a weekend trip.

Safety is the other issue.

“The solitude aspect is appealing,” Mathew Wilson said, “but there is the common sense factor of not going alone.”

For all of its benefits, kayaking can be a life and death situation. Hinds believes that many people out recreating wouldn’t know how to rescue themselves if they tipped their boat, and recommend taking some sort of rescue or safety class before going out on the water.

Mathew Wilson’s husband is concerned about her safety out on the water alone since she isn’t a strong swimmer. Despite that, she is still determined to go.

“You never get to where you know everything,” Hinds said. “Anyone can get in and muscle a boat.” All these years later, he says he continues to refine his paddle stroke and learn easier, better ways to do it.

“There is really no end to the places you can go and the things you can see,” Hinds said.

As autumn takes hold, there is still plenty of open water to take advantage of, whether it is for an hour or a weekend. Migratory birds, like pelicans, are currently making their way south through the lakes of Iowa and the leaves are turning.

This is prime-time to have what some might call a “crisis.”