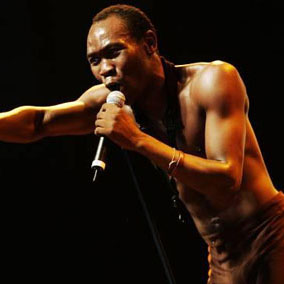 Seun Kuti is the 27 year old son of the legendary Nigerian musician Fela Anikulapo Kuti. Seun (pronounced Shay-oon) has inherited his father’s booty shaking creation, Afrobeat, which mixes African highlife music with western influences like jazz and James Brown. Seun, like Fela, makes Afrobeat as primarily dance music that is also actively political. “In Africa today, what we need is not free handouts. Please, what we need is proper management,” Seun says on corruption. Seun started opening for Fela at age 8, and took on his father’s band, Eqypt 80, at age 14 when Fela died in 1997.

Kuti and band are touring in support of their 2011 release From Africa With Fury: Rise. The show is part of the Mission Creek Festival, and is a co-production with Hancher. General-admission tickets go on sale Friday, January 20 and are priced $22/$25. All-access festival passes are $115, available at Midwestix.com.