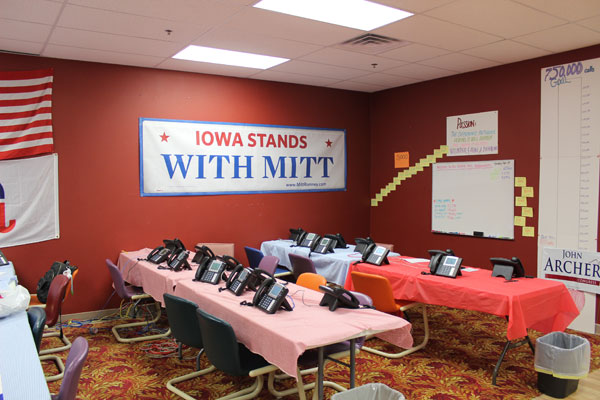 Just behind the Peking Buffet, just to the west of a Papa John’s Pizza in one of 2nd Avenue’s many strip malls, sits the Johnson County Republican Party Headquarters in Coralville. I travelled there on Wednesday, October 3 to watch the first of the three presidential debates. The twenty plus gathered enjoyed a generous spread and lively conversation.

Once the debate began, the GOP staffers turned off the lights to accommodate the large screen projection on one wall of the headquarters. As the weak and woefully incompetent Jim Lehrer introduced the contender, one of those in attendance in Coralville exclaimed “Rip him a new one Mitt!” And as we witnessed in the following 90 minutes, that’s more or less what the Republican candidate did.

For the second time in a month, a U.S. President delivered a game-changing performance. The first took place on the second night of the Democratic Convention in Charlotte when William Jefferson Clinton turned on his considerable southern charm and down home common sense to spell out the accomplishments of Obama’s first term – and the faulty logic of the Romney campaign. On this night of the first debate, it was President Obama’s listless performance that would result, at least in the week that followed, in an unprecedented reversal of fortunes for the two campaigns.

In retrospect, the performance was foreshadowed in the president’s rather sober Democratic Convention nomination acceptance speech – sober particularly in comparison with the soaring rhetorical heights of his Mile High Stadium speech in 2008.

Clearly being the president involves a different set of expectations than running for president. Mitt Romney at this point may well be more fit for the latter role – notwithstanding that supporters and opponents alike are still unclear about his policies and perspectives on just about every issue.

As Little Village goes to press for mid-October publication, there is still plenty of time – and three debates to go before all votes are cast and counted. The “Big Mo” has clearly swung to the Romney camp, and most polls show the candidates locked in a statistical tie for the popular vote. That said, Electoral College* math still appears to strongly favor the incumbent, and the smart money over at the Iowa Electronic Market** still registers a 63% probablitiy of Obama returning to the White House on January 21, 2013.