“The only remark of nature is its silence, but that is not because the world around us has nothing to say. It is because we come unequipped with ears to hear.” — Paul Gruchow, Journal of a Prairie Year

Since 1993, Steve Semken has published books about nature and the Midwest at Ice Cube Press in North Liberty. Earlier this year, he released his own book, Soul External: Rediscovering the Great Blue Heron, wherein he tells the story of a regal bird’s habitat.

No ordinary ornithology, Semken’s book takes a thoughtful approach to birding and life through wandering and wondering on the Plains.

His narrator strikes just one species off his birdwatching list through observations of a rookery in northeast Kansas. He takes the reader to a grove of symbolic sycamore trees. There, dozens of herons make their nests. The usually solitary birds stalk the surrounding meadows where they pose, court and strut.

Along the way, he finds a curious set of books, untapped for their wisdom yet bearing philosophical fruits.

Soul External is studded with aphorisms, using the writings of Baudelaire, Thoreau, Plato and Nietzsche, as well as contemporary thinkers like David Abram and Edward Abbey.

“We walk through the forests of physical things that are also spiritual things which gaze upon us with affectionate looks.” — Charles Baudelaire

Striking drawings by Andrew Driscoll decorate the book, giving shape to the adventures of the author. 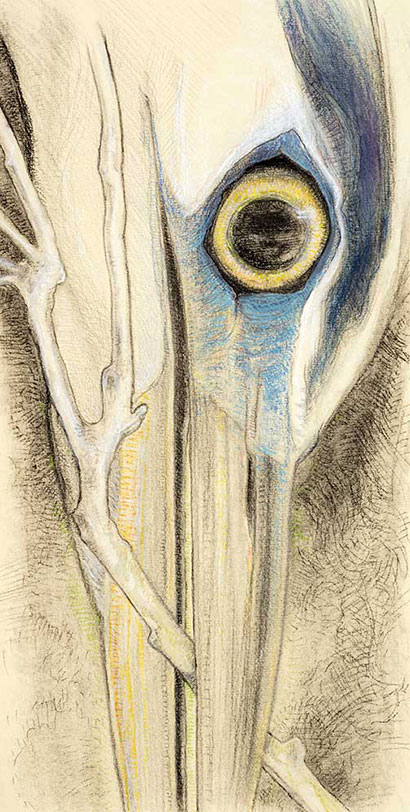 Not quite a graphic novel, the book resembles a warmer Zen and the Art of Motorcycle Maintenance, with the kind of storyline that Tom Robbins or T.C. Boyle might cook up.

Like an alchemical guidebook, Soul External employs a unique layout to enchant the reader into the life of the great bird, Ardea herodias. A 16th century scripted font called “Operina” is used throughout for emphasis. The book is not meant to be hurried through and many sections read as poetry stanzas.

The Great Blue Heron is often found in wetlands and sloughs where this saurian bird mostly eats fish, turtles, snakes, frogs and other watery critters. In drier climes, it snacks on the occasional gopher, vole or field mouse. Its snaky neck can be unleashed lightning-fast to spear its prey.

Semken lifts the veil on this bird that has long been used as a symbol of balance for its graceful flight, its long-legged wanderings on slippery shorelines and its wide-ranging, wet and dry habitats.

Herons perform a mating flight in courtship, slowly winging and drifting in grand arcs sometimes hundreds of meters in diameter in what’s called their Circle Flight. Semken’s book brings the reader inside their circle of life, where one person’s pathway to deeper discovery is revealed.

“…teachers are not always to be found in school or in great laboratories. Sometimes what we learn depends upon our own powers of insight.” — Loren Eiseley

The book’s title is taken from James George Frazer, author of The Golden Bough, who wrote about an external soul that could be taken outside of one’s self and left there, possibly forever.

Semken runs with the idea and ends up exploring non-local consciousness, the external mind of the community of life. He puts us and them into a shared quasi-quantum field.

His book asks us to be inspired by creatures outside ourselves, reawakening the need for spiritual worship of nature. By drawing on the life of one species, Semken re-enchants the Earth, resulting in a deep rumination on life and the mind.

The eighth century Sufi teacher Abu Hanifa once said, “Practice your knowledge, for knowledge without practice is a body without life.”

In this digital age of information immersion, social media addiction and entertainment overload seeming to drown us in high definition, actually exploring the Earth and sky by hiking to the secret nesting grounds of herons can sound like an archaic or even foreign activity.

But what is a person/pilgrim’s progress? Every step leads us to ourselves.

Semken’s tale is spiritual journey as excavation of the ego. It is a small prayer for the world.