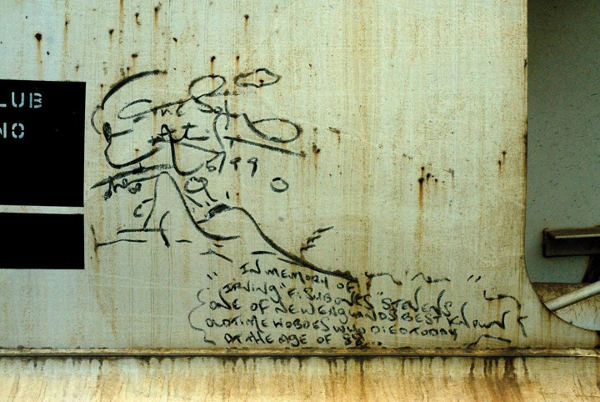 In the Northwestern corner of the state, in Britt, Iowa, an annual summer festival just celebrated it’s 111th birthday. It celebrated the core values that are not just universal to summer, or to we as Iowans, but to us as Americans: our rights and our liberties, however we choose them. The 111th-Annual Hobo Convention celebrates a freedom that few will know outside of its tightly knit culture and the curious who hover close to its campfires.

“It was in 1900 [that] the first hobo came to Britt and declared it home of the Hobo Convention,” says Linda Hughes, current Hobo Foundation president and the curator of the Hobo Museum, located in the center of town.

Today, it’s hard to imagine that the town of Britt is much different from the one encountered by that first hobo. Perhaps the biggest change is that the small community’s main drag of shops now includes a Hobo museum where it used to house a theater. Around that, clusters of neighborhoods give way to vast outlying farms that span the low horizon in every direction.

It’s a corner of the state where there is so much more sky than earth, it’s no surprise that wind is the largest crop. But during the sun-soaked months of summer the town’s population more than doubles as tourists and hobos alike trek to the town that is known around the country and the world for its museum, gardens and cemetery–all dedicated to the hobo life. Visitors partake in celebrations of all things hobo: historical tours, a parade, the world’s largest hobo jungle (a large bonfire) and a coronation of hobo king and queen. 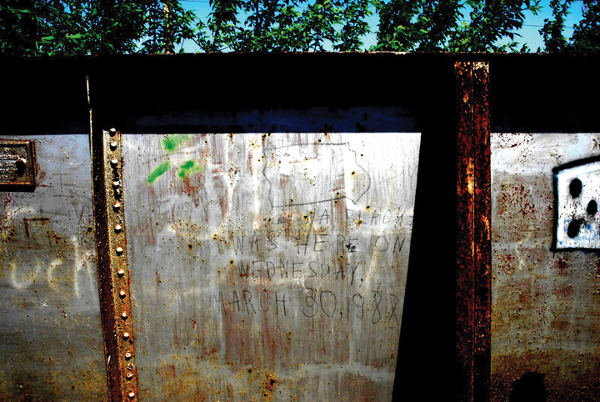 Hobo history is intertwined with Britt’s identity and business community. Linda sums up the relationship thus: “Most hobos feel Britt is their home. Many say the hobos are Britt and Britt is the hobo.”

It is a long and storied culture, the eternal summer of the American Hobo. The inaugural date of the Britt festival is a testament to that. But its heroes are only found in the tales around brush-fires in train depots and under bridges, by raconteurs claiming to have been there first hand or to have known the party involved, or being the party themselves. At first glance, America’s history has always been told as the victor: breaking of the sod, the pan of gold smeared soil; its heroes are the bootstrap industrialists, the garage tech start ups. In our popular stories we live in the same vertical narrative, always striving upward. The victor is forever surviving, but rarely living.

The festival in Britt reverses that. It highlights the poetry of wandering, the songs of the traveler. It celebrates the life of the hobo and the art of their living. So much of our artistic heritage is influenced by these men and women who take to the rails and highways in search of work and adventure in equal measure. Their stories of hardship and fellowship have been immortalized in our nations greatest works of literature and song. But here in Britt, in the warm months surrounding the festival, the stories are much more personal. “My favorite stories are from people talking about how their mother or grandmother would feed the hobos,” Hughes recalls. It’s indicative of the town’s relationship with the culture–distinctly personal, affectionate. Hughes adds, “Somewhere on their property would be the hobo symbol of a cat, which means ‘kind-hearted lady’ to travelers.” 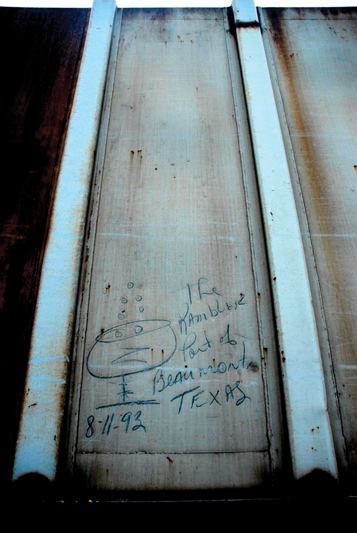 The museum’s collection memorializes the symbols and codes of the hobo. Because of the lonesome nature of the hobo, over the decades travelers have developed a vast language to inform one another of the status of a town and its climate.

Small etchings are left on the inside of train cars, on the fenceposts bordering farmsteads and at campsites under bridges. Each glyph tells of friendly homes, watchful police and dogs to beware of.

And as little as a hobo can carry, their clothes and packs develop a language of their own–walking testimonies to their travels are told in patches and pins sewn into well-worn fabric. Articles of custom clothing hang throughout the museum, each donated by a legendary hobo or their family. One such relic is a favorite of Hughes’, it tells the story of the “Pennsylvania Kid, a Depression-era hobo, who wore a hat encased with patches, pins, feathers, clothes pins and many other trinkets.” Wherever Kid traveled in search of work, he would add a little more to this elaborate headdress. At some point the hat was lost and Kid passed away. “Then a lady from Council Bluffs came to the convention four years ago and presented me with the hat.” Hughes beams, “It weighs 18 pounds–The Pennsylvania Kid has come home.

It was Kid that signaled the beginning of the festival season for Hughes. “Whenever he came to Britt for the convention, he would walk down Main Street from the south. That’s when we knew hobo day was here.” It was his march that birthed the annual hobo parade. 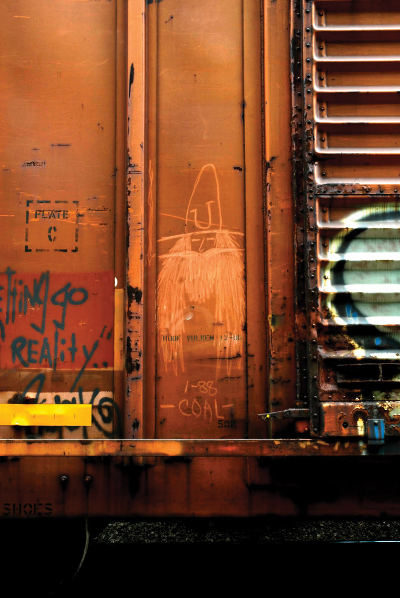 Though Kid has passed on (or caught the westbound, as hobos refer to death), he still resides in his adopted home, buried in Britt’s hobo cemetery. Maintained through donations to the foundation, Britt has created a final resting place for so many of the country’s great wanderers. Providing a place where the hobo kings and queens can be buried among friends at no cost to their friends or families, it is a comfort to many to travel knowing that there is a place for them in Britt. The city also maintains a memorial garden for the hobo queens–a brick path etched with the names of many that have ‘caught the westbound,’ but are forever remembered.

It is acts like this that make Britt, and Iowa by proxy, a beacon for the hobo. Its kindness and inclusion to the traveling stranger shows itself to be emblematic of our country’s greatest aspirations. Not only to prize and exercise our own liberties, but to foster and maintain the freedom of others, to ever be a home to the homeless. In those ideals, it may be that Britt’s Hobo Convention is the most quintessential American holiday we have.