A newly announced marathon, Run CRANDIC, will set off from The NewBo City Market in Cedar Rapids and take runners all the way to the goal line of the University of Iowa Kinnick Stadium. The event, which will take place Sunday, April 29, has been in the works for a long time, organizers said during a Thursday morning press conference.

Mark Powers, president of Corridor Running, which will be handling the race, said that the groups was honored and excited to see the event become a reality.

“A run between those locations has been tossed around in our organization for many years, going back at least 15 years,” he said.

But the logistics of the run — which will travel through downtown Cedar Rapids, along Highway 965, through Swisher, North Liberty and Coralville — were always a barrier until they joined forces with their fellow event organizers, the Iowa City/Coralville Area Convention and Visitors Bureau, Cedar Rapids Economic Alliance and GO Cedar Rapids, and the key sponsor, the University of Iowa Community Credit Union.

The group also hosts the Fifth Season Race — which brought in almost 2,000 runners for the 32nd annual race on July 4 and features an 8k course — and a half marathon, the NewBo Run, but this will be the first full marathon.

Powers said the goal was to make sure that the race course was accurate, fun and safe for participants.

A half marathon will also run from the University of Iowa Credit Union in North Liberty, and a 5K will start at the Brown Deer Golf Course in Coralville. Both routes will also finish in Kinnick, and participants can head to Big Grove Brewery and Taproom in Iowa City for a post-race party. In 2019, the race course will reverse, starting in Iowa City and ending in Cedar Rapids, and will continue to switch back and forth. 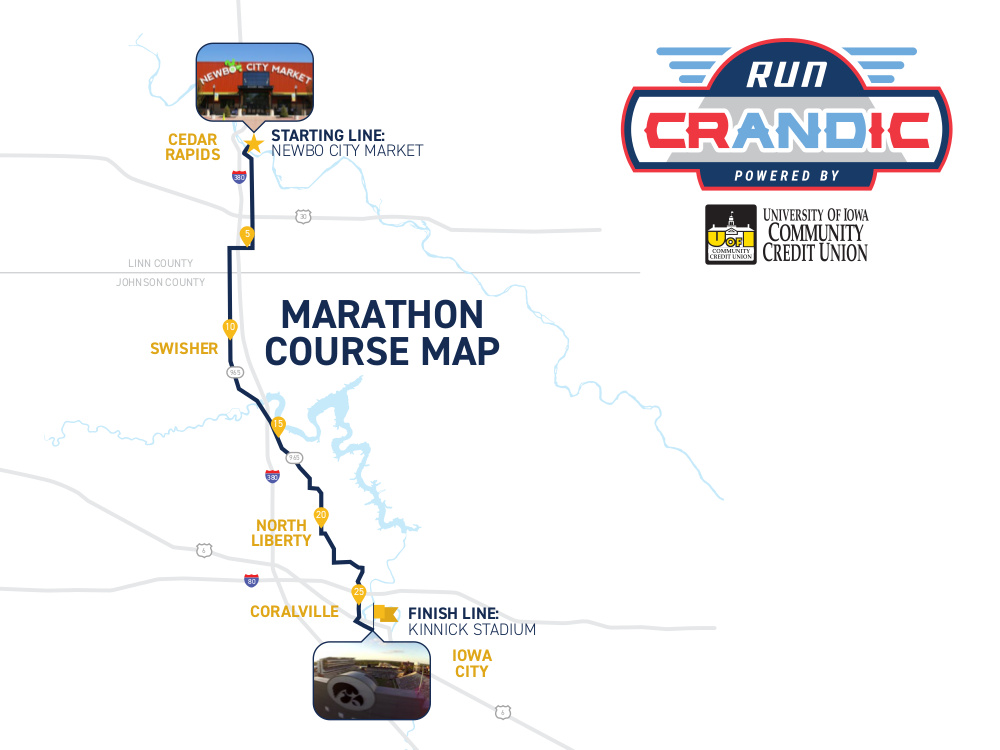 “You never go wrong investing in our schools or community,” Jeff Disterhoft, president and CEO of the University of Iowa Community Credit Union said, adding that he hoped the event got people “out, active, engaged and spending a bit of money in the communities we serve.”

Doug Neumann, president of the Cedar Rapids Metro Economic Alliance, said the run connecting was a part of efforts to think regionally, saying that the area has become more and more of a regional economy and community.

Registration for the race will open Oct. 16.