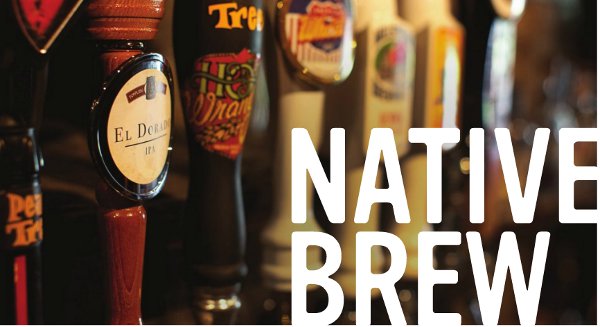 Though it may look like any other fountain of sudsy goodness, the tap line behind the bar at Short’s Burger & Shine (18 South Clinton St.) is an icon. Its ever-changing cast of 10 Iowa-brewed beers symbolizes the camaraderie, passion and growing consumer demand that is driving a beer brewing renaissance in the Hawkeye State.

Ranging from a massive, 30-barrel operation on a family farm to a tiny, 10-gallon homebrewing system in a former bank, Iowa’s 19 indigenous breweries are producing liquid bread that is beginning to generate in-state pride and worldwide praise. And with a newfound freedom to brew whatever they want, excited brewers say the sky is the limit and the best is yet to come. 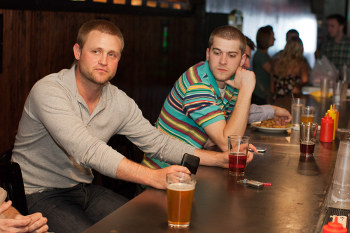 Iowa Beer may account for some of Nate Kaeding’s accuracy.

And not only is Iowa brewing good beer, more breweries are brewing more of it. According to David Coy, president of the Iowa Brewers Guild, one-third of the state’s breweries–both Iowa-based and restaurant chains, like Granite City–have opened in the past five years.

Coy remembers a time not so long ago when he was told at a Happy Joe’s that both kinds of beer–Bud and Bud Light–were available. Now, he says, “[Iowans] understand there is a different variety of beer than your mass-produced domestic lager.” Having embraced craft beer, he said, the state is a different market today than it was in 1997, when he began brewing at Des Moines’ Raccoon River Brewing Company.

Thanks to Iowa brewers’ close-nit kinship and united effort to change state law, Albert said there are now no disadvantages to brewing in the state. Previously, beers over 6.25 percent alcohol by volume (ABV) were classified as liquor and sold through the Iowa Alcohol Beverage Division. Unwilling to deal with the state distributor, brewers limited themselves to making a handful of styles that they could sell themselves or through wholesalers. Last spring, legislators raised the ABV limit to 15 and Iowa brewers are now free to brew whatever they want, said Doug Alberhasky, store manager at John’s Grocery. 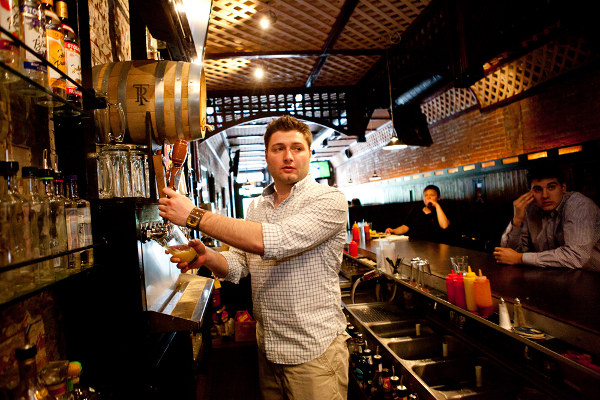 Despite the excitement and explosive growth, Iowa beer lovers admit that the state’s industry has a long way to go. Both Alberhasky and Albert said a vigilance toward quality control is essential to producing good beer and, collectively, Iowa brewers have yet to master that aspect of the craft. Due to inconsistencies caused by infections or faulty capping and packaging, Alberhasky said there are Iowa beers he would not sell to his “worst enemy.”

Regardless, there is a strong consensus that the future for Iowa beer is bright. More Iowans are choosing to drink beer brewed in their own state as a growing number and variety of Iowa beers are being plugged into taps.

Kaeding holds up a pint of Peace Tree Hop Wrangler and offers a proud endorsement of the Knoxville, Iowa brew: “I would put this up against anything that anybody is going to brew anywhere.”

Iowa’s oldest microbrewery is just a hop and a skip away from Iowa City and a must-visit destination for Iowa beer afficionados. Pints and pitchers of Millstream’s award-winning beer (and soda for designated drivers) can be filled in the taproom and enjoyed in the beer garden or the newly opened taproom annex providing views of the new brewing vats.

John’s Generations White Ale: A Belgian-style witbier, it is an excellent choice for a warm summer day, offering scents and flavors of clove, bready yeast, banana and citrus.

Iowa Pale Ale: Though not the World Beer Cup gold medal winner, it is an excellent brew. It is a perfect balance between British and west coast variations on IPA: malty and smooth with an adequate hop bite.

June 4: BrewBQ and Blues, 4-8 pm: Barbecue served by L&J Kitchen and blues served by Charlie Morgan. (Beer served by Millstream.)
June 11: Live classic rock played by Nick Stika, 4-8 pm.
June 25: Beer and Brat Festival, 12-8 p.m.: Brats from Amana Smokehouse & Meat Market will be available and Millstream will be pairing them with their beer.
July 16: Tour de Brew, 10:30 a.m. – 6 p.m.: A warm-up for RAGBRAI, cyclists will pick up poker cards and Millstream beer at each stop and those with the best poker hands at the end will win prizes. Live music will be played 2-6 p.m. in the beer garden.
July 30: Millstream Brew-aua Beach Party, 4-8 pm: Bring a beach chair and enjoy beach games, food, and beer.

Dedicated to brewing German-inspired beers, Old Man River is an ideal place to refuel or relax after hiking, antiquing or drowning your sorrows after a visit to the Lady Luck Casino in neighboring Marquette. Nestled among the wooded bluffs along the Mississippi, McGregor has a Main Street lined with antique and curio shops and is right next door to the scenic Pikes Peak State Park, a hiker’s delight, home to trails, camp sites and an overlook providing scenic views of the river.

Wooden Nickel Scottish Peated Lager: According to the menu, a German, a Scot and an Iowan walk into a bar and…you get this unique brew using German yeast and hops and Scottish malts. It is mellow and smoky.

Another brewery with the Mississippi in sight and a casino nearby, Great River brews, in my opinion, the best beer in Iowa. Though the brewery lounge does not offer any amenities other than the picnic tables and bean bag toss set up outside the front entrance, nothing else is needed when enjoying a couple of creamy pints. When hunger strikes, it’s a short walk to the Front Street Brewery. If you have a hankering to watch baseball, Modern Woodman Park, home of the River Bandits, is just a few blocks farther west. (I can’t vouch for the beer sold there, though.)

Redband Stout: This one is for those who love their stouts like their coffee. Espresso beans from Davenport’s Redband Coffee Company are infused into Great River’s Straight Pipe Stout (also excellent). For the smell my notes say, “Espresso! Coffee! Roasted!” The taste is tamer, allowing the smooth chocolate from the milk stout foundation to dominate.

Check out the brewery website for information about tapping parties for limited release or seasonal beers at the Great River lounge and its companion bar in Iowa City, Old Capitol Brew Works & Public House.

Owned by the husband and wife team of Peter Ausenhus and Margaret Bishop, Worth is worth a visit for beer lovers, especially homebrewers. Ausenhus brews on a 10-gallon Sabco system, which is essentially a large-scale homebrewing kit. (Many microbrewers use similar systems for testing recipes.) A favorite among the locals, the taproom offers five year-round beers, a seasonal and two guest taps. To visit the beer garden in the back, customers walk through the brewing room and are welcome to ask the owners about the brewing process.

Field Trip IPA: Worth’s IPA offers an excellent balance between malts and hops. Each whiff is loaded with grapefruit, orange and lemon citrus, but is balanced by caramel. The taste is not as bitter as one expects from the smell, but still offers a lot of hoppy citrus.

Oatmeal Stout: Smooth and creamy like an oatmeal stout should be. Scents of oatmeal, molasses, caramel, dark chocolate and a little coffee. Roasted chocolate and coffee dominate the taste, leaving a nice bitter aftertaste, but there is still a little sweetness.

Starting July 1, Northwood’s Fourth of July festivities are packed with Americana and include an “adult beverage garden” on Friday and Saturday nights.