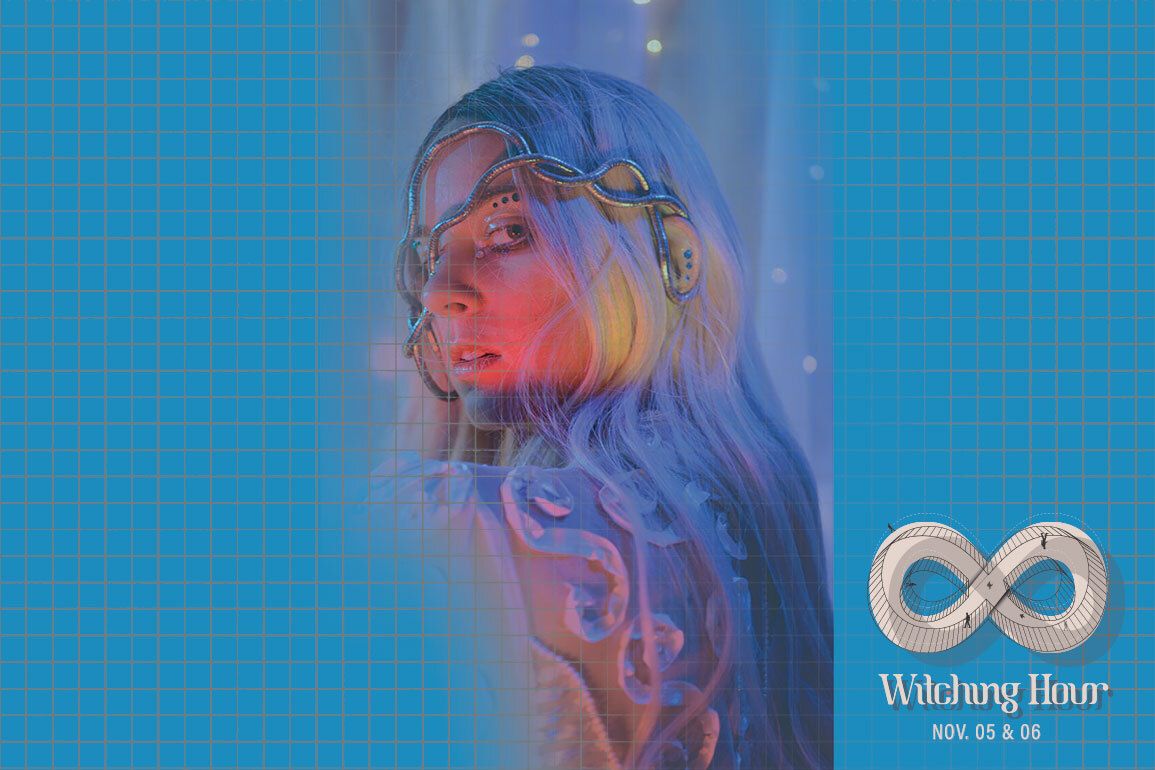 Nashville-based electronic musician Eve Maret has accomplished a lot in the five years since her debut album, Say So, was released. She takes inspiration from bands like Can, Neu and Silver Apples, and spins them together with the work of more recent pioneers like Autechre and Plaid. You can hear echoes of the past in Maret’s music, but she resists genre classification. She incorporates her voice — both singing and speaking — into her work in ways that smear the division between singing and synthesis, using autotune, vocoding, pitch shifting and sampling.

In a phone interview in early September, Maret told me she’d grown up in St. Louis, with parents who were “big music fanatics.” “They took me to concerts and I just loved it,” she said. “I felt so engaged and my imagination was exploding every time I went.”

In high school she enrolled in guitar, bass and drums lessons, before heading to college at Belmont University in Nashville. At Belmont she made a connection to drummer Chester Thompson, who played and recorded with Frank Zappa.

“It was totally by chance I could take lessons with him, and it was just a total godsend. It was what kind of saved me at the time,” Maret said. “It was a rough time of my life, but to get to study drums with him and to really pursue music and be supported in that was really amazing.”

“I decided to buy a synthesizer on a whim, without really knowing anything at all, off of Craigslist for $100 and it totally changed my life,” she said. “That synthesizer doesn’t work anymore, but I still keep it around as a memento because it’s so special to me at this point.”

People who don’t listen to electronic music will encounter her music as a sweet, optimistic, beautiful mess, perhaps overwhelming at first listen. But there’s a method here, an expression of her artistic personality. Her technical skill with electronic synthesis imposes order while allowing for surprise and delight.

When Maret’s father died, she felt a new “awareness,” she said, of the brevity of life and her place in it. She knew it was time to go all in on a career as a musician.

“His passing was really difficult for me but also a gift in the sense that it affirmed my dreams,” Maret said. “From that point I’ve just been trying to make as much music as I can and explore who I am through sound and it’s been an amazing journey.”

Since electronic music is mostly abstract, what does adding your voice and lyrics do for you? What’s motivating you there?

I’ve always been interested in the idea of pop music and the idea of music that is universally accessible, that anyone can access it and experience it and feel what the music is conveying … I’m really interested in creating songs that I hope can do that. Although I love spending time making really abstract, improvised, exploratory works, crafting songs is something I think is really difficult, and a really good yang to the yin of my improvised music practice. There are messages that I feel I need to express for myself and for others that generally have themes of empowerment and uplifting. There is definitely magic in some music with lyrics.

It’s funny because I’ve never been very comfortable with my voice, necessarily, but when I discovered the Roland VP-3, this vocal transformer, I feel like it allowed me to do what I’d been trying to do for a while. Just like the playfulness of it — it felt more comfortable to play my voice in a sense rather than just for it to exist as it is, to think of it more as a texture or an instrument than me. But I still feel like I come through that, or I definitely hope that that happens.

You’re singing through a vocoder, or it’s mixed with vocoded vocal, which kind of perfects the pitch. It reminded me of the “Still Alive” song from the Portal video game.

I love that! I’ve always been interested in … odd vocals and I think that contributes to why it’s still part of my practice today. Of course everyone has been influenced by Kraftwerk, but also Laurie Anderson is a really big deal for me. It’s an opportunity to experiment a little bit, so I don’t want to pass it up.

Electronic music has been male-dominated despite there being a lot of pioneers like Delia Derbyshire and Susan Ciani. It seems that right now is a moment where female, trans and non-binary artists are gaining note.

It’s interesting because yes, right now is the moment for women and non-binary and trans people and people of color. But it’s also like, we’ve always been here. I think there’s a process of needing to rewrite history in some ways that’s happening. So people are getting clear about how women have been influencing the genre for a really long time — and all kinds of people we haven’t heard about because people in power are the white men. But that’s changing, and it’s a really beautiful thing. I’m excited about the new music that’s being created in the world and I’m very eager to hear what it might be like.

One thing that stuck out with me listening to your album was the song “Synthesizer Hearts.” The line, “When synthesizer hearts replace our hearts” — what can you say about that lyric? What does that mean to you?

I was on tour and it was my first tour, and I was in Philadelphia, and I was staying with a friend who owns a synth repair shop they run from their home. It’s amazing; they’re called Belltown Synthworks. I was overwhelmed in the most wonderful way, and I remember looking around this room of theirs, and there’s a Prophet V — like my favorite synthesizer — and all these amazing vintage synthesizers. Literally the phrase just came to me and I wrote it down on an iPhone note and made a minute-long loop of me singing that phrase and some synthesizers and drum tracks. I left it that way for months, I didn’t know what to do with it.

Then I got an [Ableton] Push and I embarked on this journey to make it as abstract as possible, and to just create the song from that little loop that I didn’t know how to complete. I’m not trying to say, “Oh, all of humankind should have their hearts replaced with a synthesizer.” It’s more so me exploring the relationship between myself and my synthesizers, and how it’s so magical that a synthesizer can sometimes express my feelings better than I can express my feelings. I just feel it’s a beautiful alchemical thing that happens with making music. The role of the instrument is very important.

Your piece “7” is a long improvisation using just one instrument. How does improvising on a single instrument feel? How is that different from working with your whole studio and software?

I think working with one instrument and improvising is really the most basic form for me to meditate. It feels riskier and more exciting in a way, because I’ve presented myself with this challenge of, “OK! No plans!” There’s no controlling; it’s simply listening and following my intuition. That’s a practice that’s really important, and it is the foundation of my recording practice too, my song crafting.

For many years open-ended jamming is how I’ve made a lot of music, or the root of it, I guess. I started doing these solo improv explorations during quarantine because I was thinking, “You know, why not?” And I wanted to know my synthesizer better and really see all that it had to show me. So I’ve kind of dedicated myself to spending time every day recording these improvised sessions. I still keep up with that from time to time. It’s been really fun and surprising and sometimes chaotic and disappointing, and sometimes really feels great and groovy. It’s a mixed bag but I feel like it is a lot of fun for me to just kind of let go of control and see what happens!

I was also interested in seeing what kind of compositions would naturally arise. It’s funny to me; I’ll listen back to some of the improvisations and they’ll start to feel … like I’ll start to kind of get a grasp of what the structure is. It’s a journey through different spaces.

Kent Williams is a writer and electronic musician in Iowa. He’s released music on the pertin_nce and Triplicate Records labels, in addition to several self-released albums on Bandcamp. This article was originally published in Little Village issue 299.